Fukutoku Okanoba - morphological changes on 08/26/2021 / 1:07 p.m. of the western crescent of Niijima - photo Japan Coast Guards - one click to enlarge

An overview of the eruptive site of Fukutoku Okanoba on August 26, 2021 by the Japanese coast guard shows a strong erosion of the eastern crescent of Niijima.

Professor Kenji Nogami, Volcanic Fluid Research Center, Tokyo Institute of Technology (on board the plane) give comments on the situation:
・ Niijima on the west side has not changed significantly and remains as land for some time.
・ A gray substance that appears to be volcanic ash erupts from the center of the crater, causing a brownish-brown color.
The colored waters are also distributed on a large scale and active volcanic activity is still ongoing. Fukutoku Okanoba - the coloring of the waters testifies to a volcanic activity still ongoing on 08/26/2021 / 12:50 p.m. - photo Japan Coast Guards - one click to enlarge

An eruption occurred at Suwanosejima (Mount Ontake Crater) at 12:31 p.m. on August 28, and smoke from the eruption rose 4,800 m above the crater rim.

The ashes scattered north, and a large amount fell on the village of Toshima. An area 2 km north of the volcano is considered at risk. 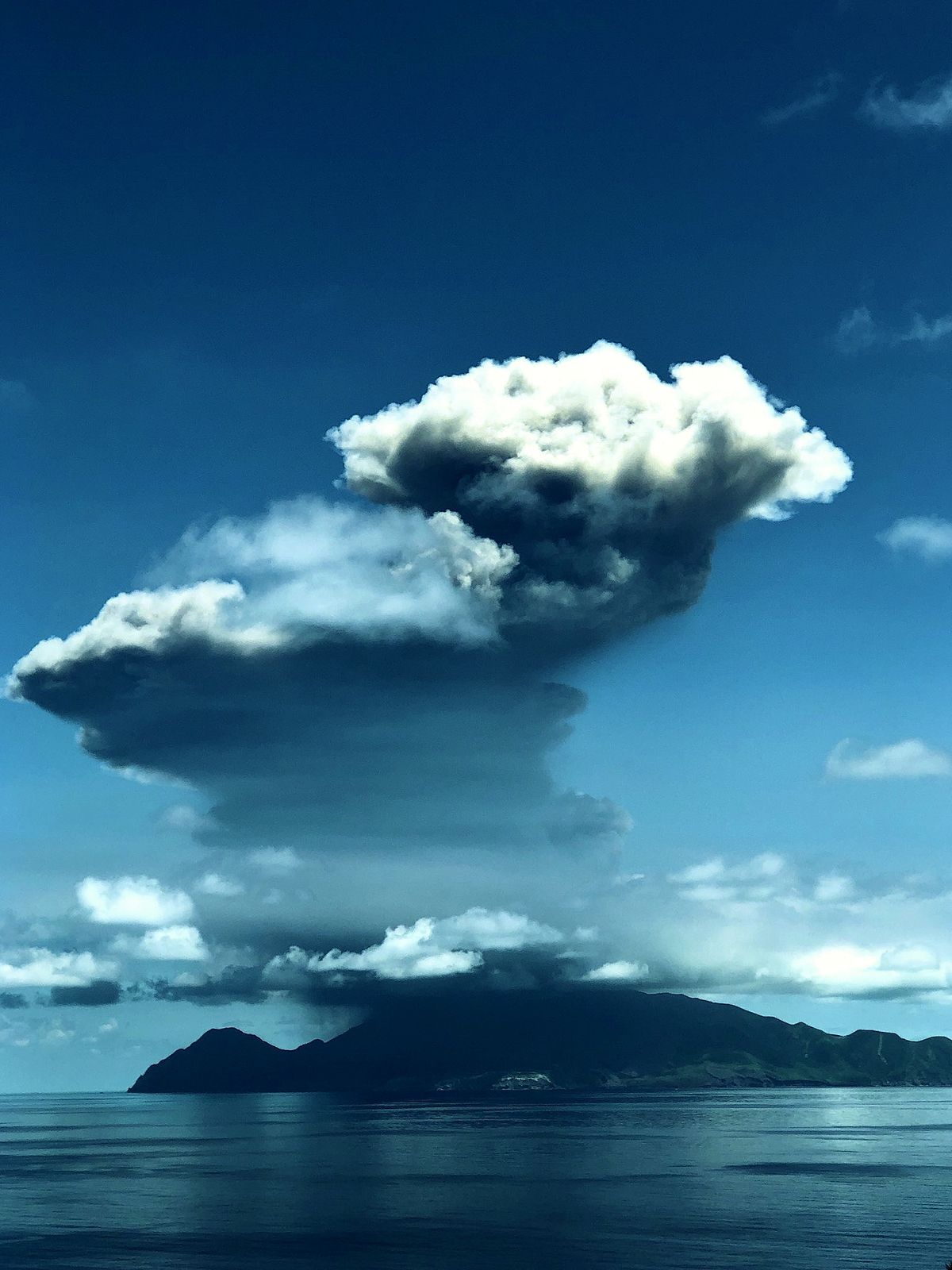 The US Geological Survey's Hawaiian Volcanoes Observatory (HVO) has detected a resumption of seismic activity and soil deformation below the southern portion of the Kīlauea Summit Caldera in Hawaii Volcanoes National Park 'i. The rate of soil deformation started to increase again around 6:00 p.m. HST on August 26 and was followed by an increase in seismic activity after 8:30 p.m. The resumption of activity occurred at roughly the same location as the earthquake swarm of August 23-25, inside and south of the Kīlauea caldera. The combination of these observations indicates a second pulse of intrusive activity.

No indication of upward migration of earthquakes to the surface or change in deformation that would indicate a shallow depth of source intrusive activity. As a result, Kīlauea's Volcanic Alert Level and Aviation Color Code remain at Advisory / Yellow.

While activity slowed by the morning of August 27, additional intrusion pulses are possible. Any potential eruptive activity related to these events would be entirely within Hawai'i Volcanoes National Park and localized in undeveloped areas, well away from infrastructure such as roads. Map showing seismic activity under the southern portion of the Kīlauea Caldera in Hawai'i Volcanoes National Park from August 23, 2021 at 12:15 p.m. until August 25, 2021 at the same time. The map shows the locations of earthquakes, with earthquakes colored by the time they occurred and their magnitude (see key at the bottom of the figure). The plots above and below the map show the depth of the earthquake below sea level (0) by longitude (bottom) and depth below sea level (0) by latitude (top) , with lines of longitude and latitude corresponding to the map. USGS map and tracks. - one click to enlarge The crater of Nyiragongo volcano is completely empty. On social networks, comments are numerous after the broadcast of the video of the flyby of August 26, 2021. Some even go so far as to insinuate that the famous volcano is now extinct. Dr. Charles Balagizi, volcanologist at the Volcanological Observatory (OVG) in Goma since 2009, made an update point : The Nyiragongo volcano is not extinct.

The absence of a lava lake does not mean that Nyiragongo is extinct or that it will no longer erupt. It is a fairly young volcano that is around 15,000 years old, and will certainly remain active for a long time.
The Nyiragongo crater is indeed empty, and this is quite normal because the lava it contained was emptied from the southern flank of the volcano during the last eruption on May 22, 2021.
It is necessary to wait for the magma to rise from the deep and superficial magmatic chambers towards the surface, passing through the magmatic pipe. This chimney is currently clogged with products (a thick layer of rock and ash) from the collapse of parts of the crater platforms.