The eruption of Cumbre Vieja in La Palma, which destroyed hundreds of homes, continues its course in accordance with its Strombolian nature, with explosive phases, lava fountains, with lava flows coming from the two brand new eruptive vents , and an eruptive plume that reaches up to 4,500 meters in height, with a strong emission of ash. Acid rain processes should not be expected given the current trade winds weather conditions.

Fountaining is stable; it is however sometimes interrupted by large lava bubbles, responsible for the ejection of incandescent bombs which fall on the cone and up to more than 1,000 meters away. 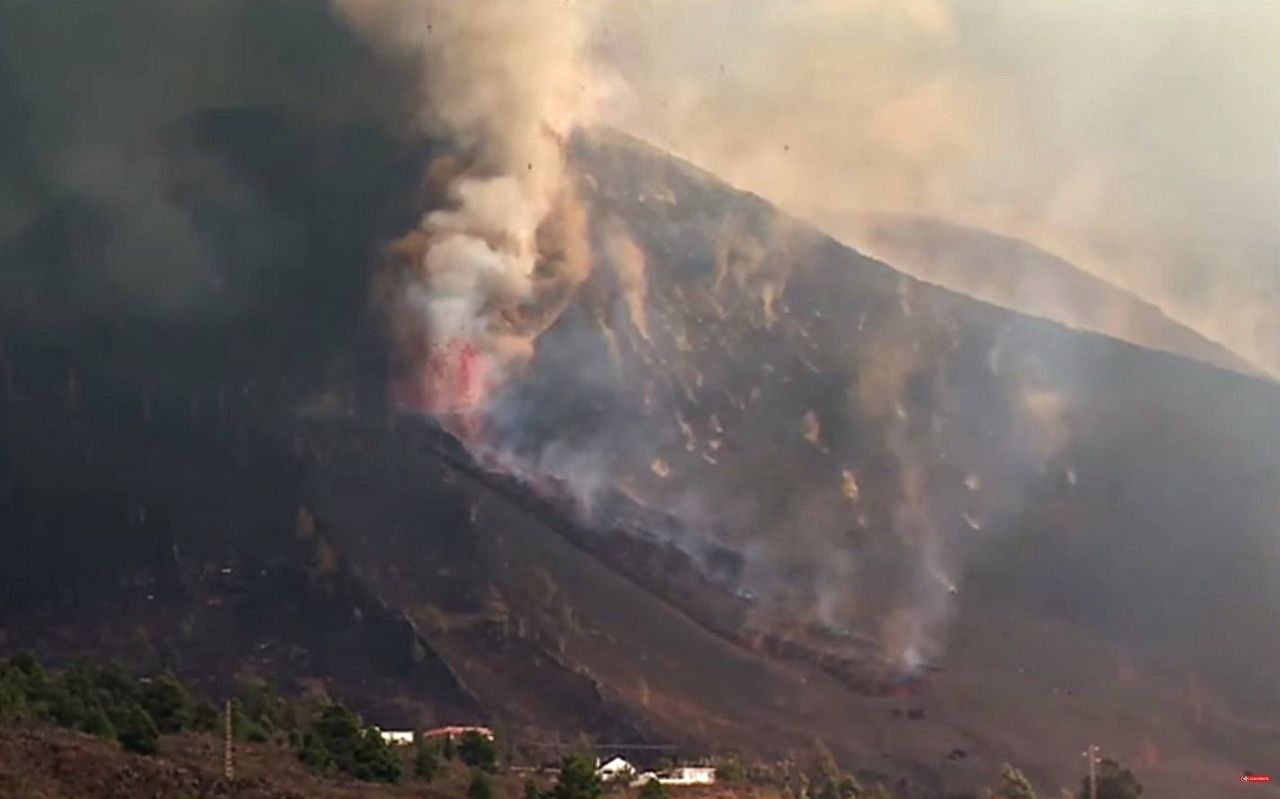 At approximately 4 p.m. on September 24, a new vent opened on the flank of the active cone. The Direction of PEVOLCA, in view of the increased risks, ordered the evacuation of Tajuya, Tacande de Abajo and the still unevacuated part of Tacande de Arriba.

The RSAM amplitude of tremor measured in a seismic station near the eruptive site is on the rise, directly linked to the quantity of magma coming out and to the explosiveness (IGNes). The lava, of basaltic composition containing phenocrysts of plagioclase and pyroxene, from the eruption that began last Sunday, already occupies 220 hectares, with a perimeter of 15.7 kilometers. The lava flows have a length of 3,800 meters and is located 2,100 meters from the coast, according to the latest data provided this Thursday by the Steering Committee of the Special Plan for Civil Protection and Attention to Emergency Situations for Volcanic Risks (PEVOLCA to 23.09).

As for lava flows, there are two relatively slow active fronts that move away from the emitting center and one of which has a front of about 500 meters. One of the languages, the one located further north, is almost stopped and advanced Wednesday at 1 meter / hour, reaching a maximum height of 12 meters. The southern front, which surrounds Montaña Rajada, advanced at 4-5 meters / hour yesterday.

The firefighters carry out preventive cleaning work on the roofs, which could collapse due to the weight of the accumulated ash.

According to the National Geographic Information Center, the aviation color code turns red in the Canary Islands due to the evolution of the eruptive column of gas and ash from the Cumbre Vieja volcano. On 2021-09-24, TROPOMI detected a strong SO2 signal at a distance of 906.2km towards Safi with 315.85DU of SO2 at an altitude of ~ 3km. Estimated mass at less than 300 km: 80.7 kt. At Fuego, the seismic and acoustic monitoring parameters and field observations show a gradual decrease in activity: the effusion is decreasing, and the flows are no longer active.

The materials deposited in the Ceniza and Trinidad barrancas can generate lahars of high temperatures, moderate to strong, under the effect of rains on the upper parts of the volcano.

The number of explosions remains between 7 and 13 per hour, accompanied by ash plumes at 4,800 m. asl., moving west and southwest. Ash falls could affect the villages located in these directions.

In Fagradalsfjall, the rash has been on hiatus for 7 days. The crater is empty, and still degasses.

The authorities point out that under no circumstances should you venture onto the lava flows, which are always very hot. In Merapi, between September 17 and 23, 2021, the BPPTKG reported 141 avalanches of incandescent blocks towards the southwest, with a maximum sliding distance of 2,000 m.

The current potential danger remains consisting of lava block avalanches and pyroclastic flows in the south-east-south-west sector for a maximum of 3 km to the Woro river, and 5 km to the Gendol, Kuning rivers. , Boyong, Bedog, Krasak, Bebeng and Putih. During this time, the ejection of volcanic material in the event of an explosive eruption can reach a radius of 3 km from the summit.