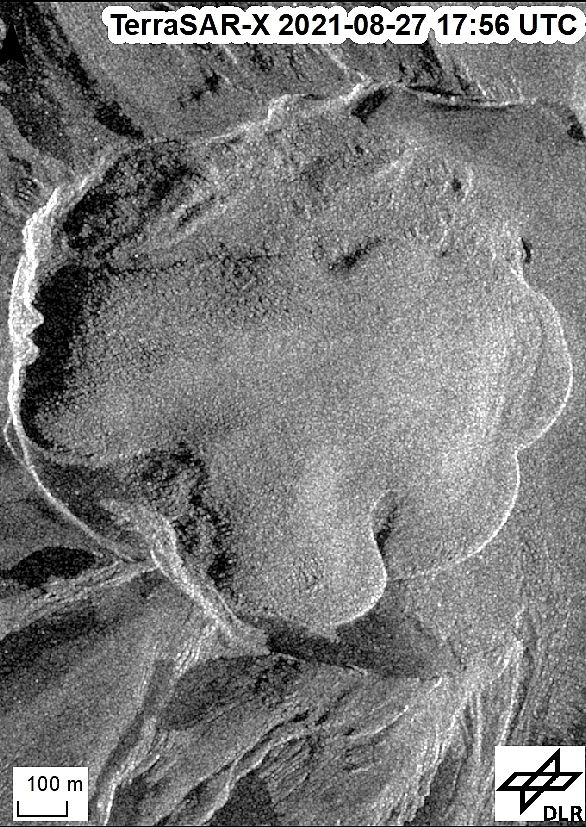 The ongoing eruption of the Great Sitkin volcano has caused a lava dome to grow in the volcano's summit crater since mid-July. This lava eruption follows an explosion on May 25 that generated an ash cloud that rose to about 15,000 feet above sea level and likely allowed magma to move from depth to reach the surface.
The dome has grown steadily over the past six weeks, as shown by radar and satellite visual images, and has now mostly covered the lava dome from the previous summit of the 1974 eruption.

A satellite radar image from September 9 shows lava starting to advance through a breach in the southern rim of the summit crater. The lava dome currently has dimensions of about 1,100 m east-west and about 860 m north-south, and is 25-30 m thick.

Along with the lava effusion, sulfur dioxide emissions were regularly detected by the TROPOMI satellite sensor, with SO2 emission rates estimated at a few hundred tonnes per day. Small earthquakes, consistent with the growth of the lava dome, continue to be observed, as well as occasional deeper events located beneath the volcano.

No ash or explosive activity was detected during this effusive phase since a small deposit of ash was observed on July 26. Continuous effusion suggests the vent is currently open and allows effusive (non-explosive) lava eruption.

The current alert level is Watch, with an Orange aviation code. During the last 24 hours, thanks to the monitoring systems of the Popocatepetl volcano, 130 exhalations accompanied by water vapor, volcanic gases and a low ash content have been identified. In addition, 769 minutes of low amplitude tremor have been identified, as well as an explosion: recorded today at 5:19 am (photo)

Since this morning and at the time of this report, the crater has been observed with a slight emission of water vapor, gas and slight amounts of ash in a southwest direction.

Since the beginning of September, the observatory has counted 13 explosions.

The Popocatépetl volcanic alert is in Amarilllo Fase 2. 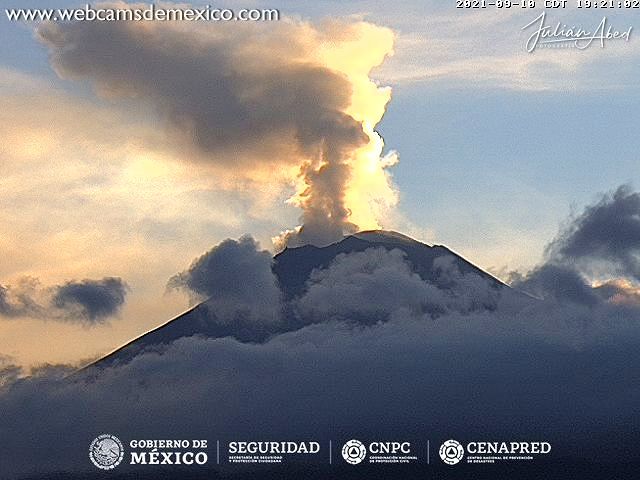 Ice break-up continues at Skafta, although there has been a significant reduction in flow and a decrease in water level in the river channel.

Running water still circulates in the plains. The main signs of this are that the water level in Tungulækur, which comes from Eldhraun, continues to rise. However, it is clear that the impact of running water in the flood zone has decreased considerably.

However, there is still a risk of gas pollution near the source of the Skaftá River.

A yellow warning has been issued for precipitation in the flood zone and will take effect Sunday afternoon. Heavy or heavy precipitation is expected and water levels can be expected in rivers and streams. The effects of precipitation may be greater than not in the area affected by the eruption due to the resulting high water level. Jökulhlaup / Skafta river at the bridge on Route 1 - photo Veðurstofa Íslands 09.09.2021 - one click to enlarge The two cauldrons of Skaftá / Vatnajökull just released flood water with additional surface deformation with crevices and a clear sign of the flood water path - Landsat 8 image from 09.09.2021 via Ragnar Heiðar Þrastarson - one click to enlarge

La Soufrière of Guadeloupe and the MYGALE Project:

The project refers to the name of a small native spider that lives on the volcano: the Soufrière tarantula! (Rock Lab Strasbourg)

The collapse of the flanks represents a significant volcanic risk. Hydrothermal alteration is considered to favor volcanic instability, but there are few data and models to robustly assess this hypothesis. MYGALE is a multidisciplinary and collaborative project that will combine laboratory measurements, geophysical techniques and modeling to assess the role of alteration on the stability of La Soufrière de Guadeloupe (France / Caribbean ).

Accelerated field geophysical measurements will map the extent and course of weathering, experiments will provide data on the physical properties of weathered rocks and weathering timescales, and large-scale 4D numerical modeling will assess the influence of weathering on the stability of the volcano by painting geophysical data and larger-scale laboratory data.

MYGALE's results will be applicable to hazardous volcanoes around the world.