Dense and strong ash emissions occurred from the active vent at Telica, Nicaragua, on September 2 starting at 6:40 a.m. local time. The emissions started slowly, but intensified. The ash plume began to dissipate after two hours of intense activity.
The volcano sent a plume of ash to 2,100 m. in height, according to the Volcanic Ash Advisory Center (VAAC) Washington.

According to Sinapred, the volcano's explosions occurred when the volcano cleared the debris caused by the landslide that blocked its crater. The eruptive activity did not show any alterations in the seismic amplitude data in real time (RSAM), and authorities do not expect a major eruption to be imminent. 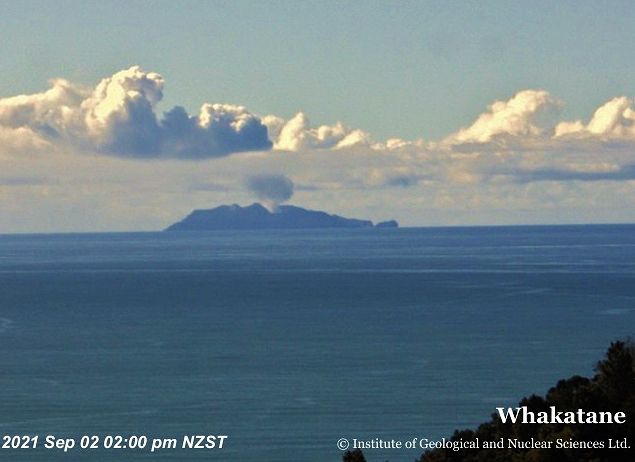 Since 6:50 a.m. on September 02, 2021, a minor ash emission has been observed from the active ventilation area at Whakaari / White Island by the web camera.

Satellite images indicate that a weak ash plume has now reached the area above the Bay of Plenty coast. This weak incineration phase follows on from the short episodes observed in recent weeks in Whakaari. Today's one is more sustained over time, and due to the direction of the north wind, traces of ash are transported to the Bay of Plenty.

Webcam images continue to show a nocturnal glow, suggesting temperatures in the active ventilation zone likely remain around 500-600 °C, according to recent observations.

The current level of activity corresponds to moderate levels of restlessness. As such, the Volcanic Alert Level remains at 2 and the Aviation Color Code remains at yellow. A synthetic aperture interferometric radar (InSAR) interferogram, derived from two passages of the COSMO-SkyMed satellite of the Italian Space Agency, on August 19 and September 1, 2021, illustrates the intrusion of magma in the southern region of the Kilauea's summit caldera, which occurred between August 23 and August 31, 2021. Each color cycle represents 1.55 cm of change in distance between the satellite and the ground (change in range).

The interferogram shows a maximum of 14 cm of range change, which could be generated by 18 cm of uplift generated by the intrusion of magma in the southern region of the caldera that occurred between 23 August and August 31. 2021.
Currently, soil deformation in the southern summit area of ​​Kilauea continues, albeit at a slower rate than seen last week. Kilauea - Time series plots of the hourly count of earthquakes in the Kīlauea summit region (top) and tilt at Sandhill station located southwest of the Kīlauea caldera (bottom). - Doc. HVO 22.08 / 31.08.2021 - one click to enlarge

The VAAC Tokyo reports this September 2, 2021, a light and narrow plume of ash on Pagan / in the northern Marianas, based on visual observation and the low-altitude Goes satellite drifting 150 km west of the volcano this 3 September.

An ash scattering advisory was also issued on September 3.

Pagan is monitored by satellite, by a seismic-acoustic network on Saipan, and seismic statios on Guamet Chichijima / Japan, by hydroacoustic data from Wake island. A crack that formed during an eruption of the North Pagan volcano in the Mariana Islands in 1981 crosses the summit of the volcano. Three main vents were active along the crack. U.S. Navy Photo, 1981 / via GVP