The activity of Cumbre Vieja is marked by the expulsion of lava towards the western flank, feeding the existing flows.

For the most active flows, one of them is located 84 meters from the coast; another advance towards the south in two arms: the first on the existing lava field, the other left the field of the old flows destroying new areas.

The ashes, near the eruptive site, reach such a height that houses are completely buried ... only the tops of chimneys or a roof frame protrude. La Palma - the houses near the eruptive site disappear under the ashes - photo I love the world / 28.10.2021 - one click to enlarge

Seismicity remains at high levels: 25 of these earthquakes were felt by the population. The strongest earthquake is the one located at 2:21 p.m. on October 27, with a magnitude of 4.8 mbLg and a depth of 37 km, which was felt with a maximum intensity of IV on the island of La Palma. Nine earthquakes were located at depths of about 30 km, the rest of the hypocenters of the period are located at a shallower depth, about 12 km.

The amplitude of the volcanic tremor signal is maintained at high average levels, without intensifying pulses.
The island's network of permanent GNSS stations shows that the elevation recorded on the 25th at station LP03, which is closest to the eruptive centers, has reversed. However, the southern deformation recorded by the station was only partially recovered. At the most remote stations, a slight deflation is maintained, possibly linked to deep seismicity. The Kīlauea volcano is erupting. As of the afternoon of October 27, 2021, lava continues to emerge from a single vent in the western wall of Halema'uma'u Crater. The western end of the lake showed a maximum altitude of about 794 meters above sea level by the HVO permanent laser rangefinder on October 27, 2021, or 1m. more than yesterday, and a total increase of about 50 meters since lava emerged on September 29.

On the morning of October 29, an arch formed over the cone's discharge channel, adding an interesting formation to the ever-changing caldera. (Bruce Omori / Paradise helicopters)

All lava activity is confined to Halema'uma'u Crater in Hawai'i Volcanoes National Park. 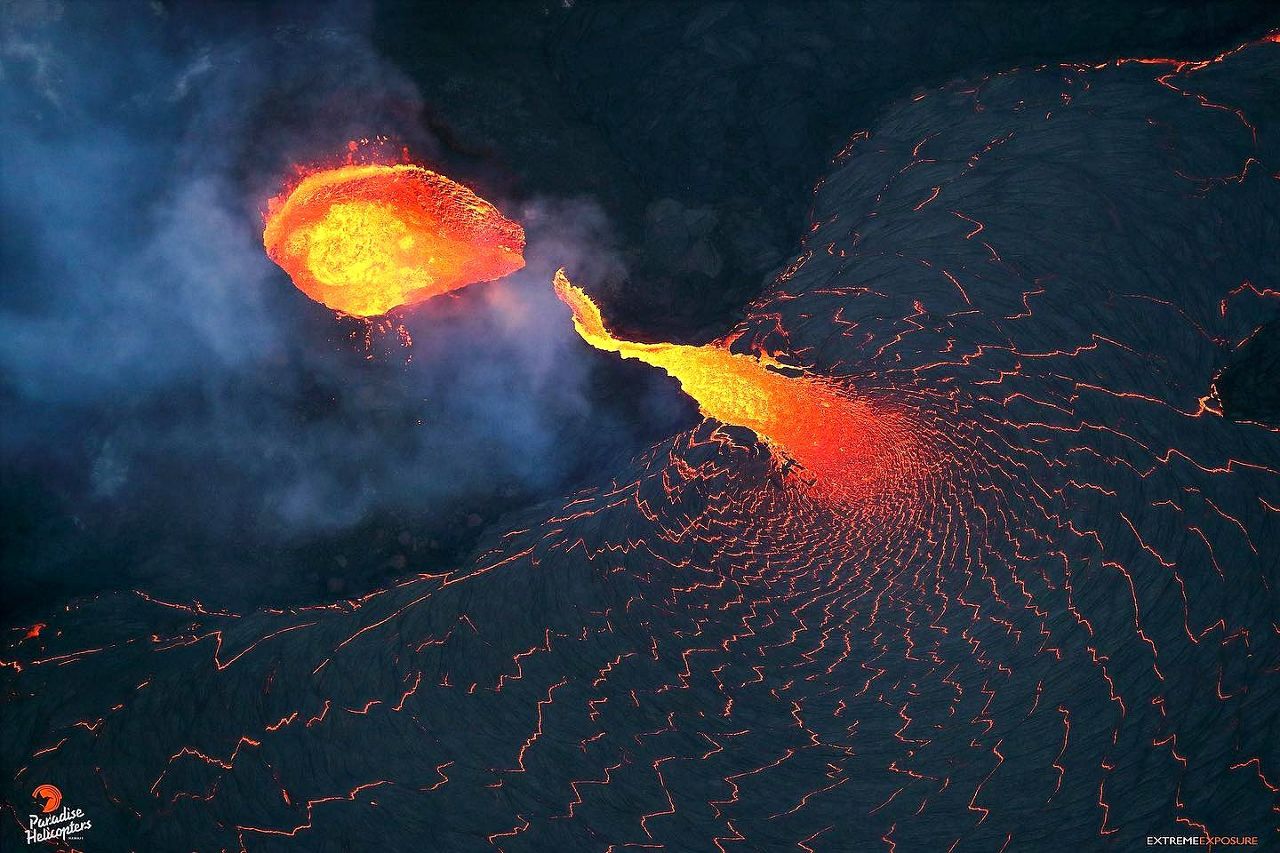 Volcanic gas emission rates remain high, with a preliminary emission rate for October 25, 2021 of at least 2,600 tonnes per day. No significant change observed in summit tilt or GPS observations. The seismic activity remains below the background noise and the volcanic tremor has remained high since the start of the eruption. The August eruption at Fukutoku-Okanoba, an underwater volcano on the Ogasawara Islands, resulted in the release of a large quantity of pumice stones on the shore of the Amami region in Okinawa in October, where they break in waves. The thickness of the pumice in the port is approximately 30 cm. A large quantity of pumice stones prevented 750 fishing boats from fishing, and a large number of fish killed in the breeding farms at sea. The pumice stones which were thrown into the sea during the eruption of the mid- August were on the westerly current known as the "Kuroshio Counter-Current" which flows near Japan. It took about two months to confirm that we arrived in Amami, Okinawa, about 1400 km from Fukutoku-Okanoba.

Ocean current experts, who simulated the movement of drifting pumice stones, call attention to further expansion of the impact.
Regarding the future of pumice, Miyama believes that "it looks like it will affect from Kyushu to Honshu". It is said to travel north from the East China Sea and straddle the Kuroshio Current which flows on the Pacific side of the Japanese archipelago.