The north face of the eruptive cone of the volcano of La Palma - still without an official name - collapsed in the early morning of Saturday 0ocober 09th, releasing a flow of lava that carries very large blocks.

The new lava flow from the La Palma volcano moves unstoppably through the Camino de La Vinagrera and generates destruction in its path, making it difficult for scientists to travel in the area, said the Volcanological Institute of the Canary Islands (Involcan ) this Saturday !

The lava flow advanced through the industrial area of ​​Callejón de la Gata in Los Llanos de Aridane. It raises concerns for the Pevolca. It is a large mass of lava that has already devastated a small number of houses. Víctor Melo, from the Volcanes de Canarias association, which is there, reports explosions and lava fountains less vigorous than yesterday, but more ash emissions. The dense ash plume rises for several kilometers and slowly drifts to the southeast.

The lava now covers 497 ha., The maximum width of its front remains at 1,250 meters, and the delta part in the ocean measures 32 acres. The number of buildings affected was estimated at 1,186. The monitoring stations installed near the Nevados de Chillan Volcanic Complex recorded on Saturday, October 9 at 07:06 local time, an earthquake associated with the dynamics of fluids inside the volcanic system (LP earthquake).

A plume of gas and ash rose 240 meters above the point of emission on October 9 at 10:06 UTC, lying in a northwesterly direction.

The alert remains in Amarilla, the activity remaining similar to the previous days. 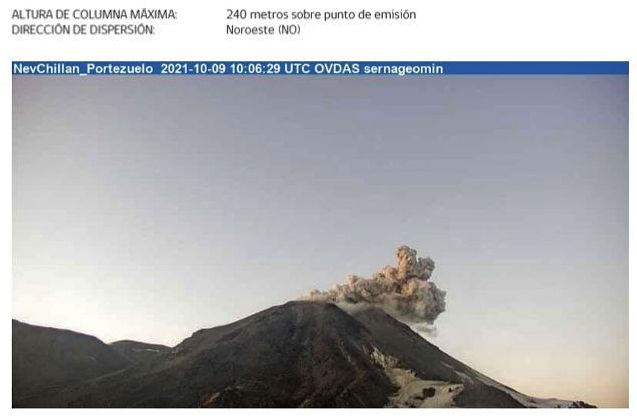 A magnitude 3 earthquake was measured about 7 kilometers northwest of Öskjuvatn at 8:23 a.m. this morning. The earthquake occurred at a depth of about 2.6 kilometers.

This is the biggest earthquake that has occurred in the Askja region in some time. The earthquake occurred at a depth similar to that of the magma intrusions, and IMO monitoring is strict, although these earthquakes are not exceptional. 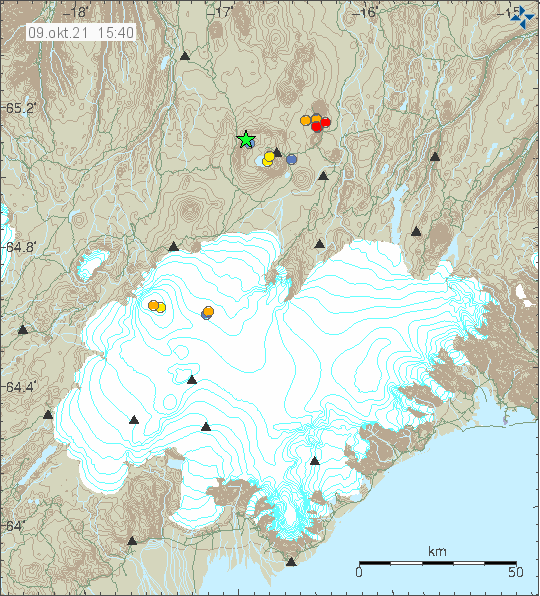 Since the end of summer 2021, an increase in fumarolic activity and seismic activity has been observed at the La Fossa crater de Vulcano (Aeolian Islands). For this reason, the Italian Ministry of Civil Protection has raised the alert status for this volcano from green (volcano in a state of equilibrium) to yellow (volcano in a state of potential imbalance). During the first days of October 2021, Vulcano's gas emissions have been quite remarkable, due to a combination of increased gas production, atmospheric humidity and no wind. (see articles from previous days) The video below was shot on October 3, 2021 by volcanologist Alessandro Gattuso (Palermo section of the INGV) during a "walk" through the fumaroles on the northern edge of the crater of La Fossa, as part of a '' a measurement and sampling mission. High pressure gas emissions were occurring at various locations, generating a loud whistling sound.