Seismic activity is on the rise again this October 7 in La Palma / Cumbre Vieja, both in number of earthquakes and in their magnitude. However, there is no parameter indicating the opening of a new transmitting center far from the active cone.

A new arm of lava flow has separated from the main flow, and descends the cliff 750 meters further south advancing on the old platform created by the San Juan volcano in 1949, at Las Hoyas. It leads to further destruction of crops and structures over approximately 10ha. 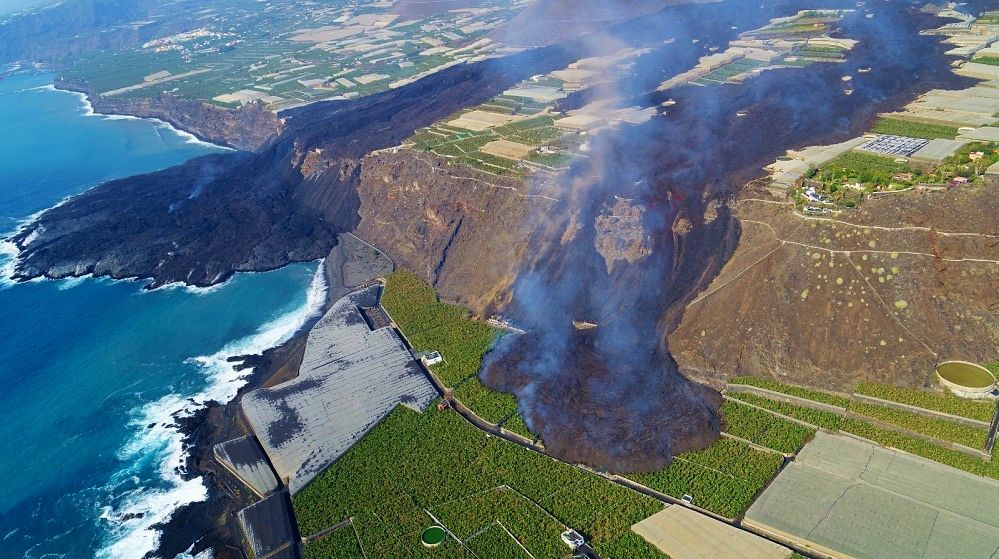 The activity has become more explosive in recent hours, characterized by an increase in tremor.

Following an inversion, the air quality deteriorated sharply; the situation will continue until October 9th. It affects La Palma airport which is temporarily closed.

This October 8, we can see on the RTVC webcam a collapse at the level of the cone, which releases a beautiful lava flow. During the last 24 hours, thanks to the monitoring systems of the Popocatépetl volcano, 96 exhalations accompanied by water vapor, volcanic gases and small amounts of ash have been identified.

The alert remains at Amarillo Fase 2. The activity of Villarica, on Green Technical Alert, presented in September a decrease in monitoring parameters compared to previous months, suggesting a stabilization of the internal dynamics of the volcanic system. The decrease in LP earthquakes, less detection of thermal anomalies, and the absence of acoustic signals suggest that the lava lake remains at a deep level.

The open duct situation and the fluctuating behavior of the lava lake could cause explosions to affect the surroundings of the crater within a radius of 100 meters. In Kilauea, since the morning of October 7, 2021, lava continues to emerge from two vents: one along the floor and one in the western wall of Halema'uma'u crater. All lava activity is confined to this crater.

Over the past 24 hours, the level of the lava lake has risen by about 1 meter with a total rise of about 32 meters since the lava emerged on September 29. The total thickness of the lava filling Halema'uma'u is now 258 meters with an elevation of the lake surface of about 775 meters above sea level. The western vent continues to have the fountain the most vigorous with sustained lava fountain heights of about 12 meters. The lava lake of Halema'uma'u with the two main vents that feed it. The color of the surface of the lake seems to delineate the vent from which the lava spread, the lava from the west vent being more silvery while that from the south vent is darker.- photo Bruce Omori 10.2021 / ExtremeExposure / Paradise Helicopters