From 12:00 UTC on October 27, sporadic ash emissions from the SE crater of Etna are observed. These emissions generated small puffs of ash which were blown southwest by the wind, dispersing into the atmosphere. No anomalies were observed in the thermal camera images.
The mean amplitude of the volcanic tremor shows a fairly stationary trend on medium-low values ​​and the centroid of the sources is located in an area between the south-eastern crater and the Bocca Nuova at an altitude of about 2800 m above sea level.
The infrasonic activity is also at low levels, both in number and in amplitude and is located in correspondence with the Bocca Nuova.
Soil deformation monitoring networks do not show significant variations. The fissure eruption of Cumbre Vieja continues to show a Strombolian mechanism, now with a predominance of the effusive phase.
Yesterday at noon, there was a partial collapse of the upper part of the main cone, modifying its morphology and deviating the lava flows preferentially towards the west compared to the previous flows.

Currently, several emission centers are still active with intermittent activity (both pyroclastic and lava), varying according to the configuration of the eruptive zone: collapse of the cones and subsequent reconfiguration, cessation of activity of some of the centers, increase of explosiveness,…. The appearance of new emission centers around the main cone, as well as other surface observables (visible gas emissions) within the exclusion zone, is not excluded.

The measured height of the eruptive column is 3400 m. 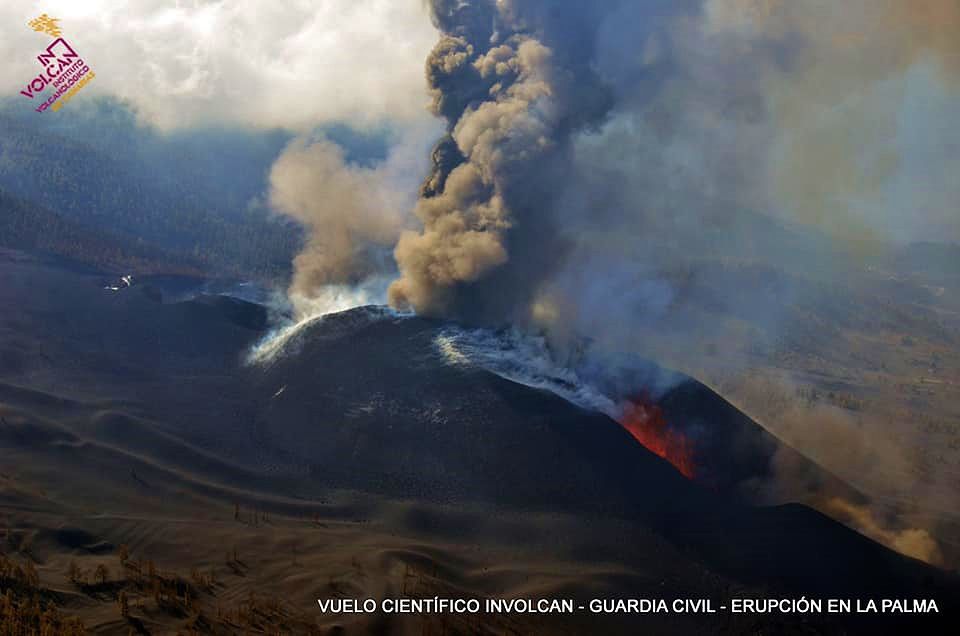 La Palma Cumbre Vieja - Photo 27.10.2021 during the Guardia Civil scientific flight by helicopter with a team from INVOLCAN, which verified the state of the lava flows using infrared thermography and measured SO2 and CO2 in the volcanic plume. Seismicity continues to be localized at depths between 10 and 15 km. There are also earthquakes located at depths greater than 20 km. Over the past few hours, the number of events greater than magnitude 3.5 mbLg has increased at both medium and deep depths, reaching magnitude 4.9 mbLg and intensity IV-V. High values ​​of the amplitude of the tremor signal are maintained, with intensifying pulses. No significant surface seismicity is recorded. The current level of seismicity continues to indicate that more felt earthquakes are possible, which can reach intensities VI (EMS) and cause small landslides in sloping areas.

The 10cm deformation reported yesterday, recorded at the station near Jedey, almost completely reversed, returning to the levels of the previous days. At present, there are no new relevant deformations. In the stations furthest from the eruptive center, a slight regional deflation of deep origin persists.

During yesterday (26/10), the emission of sulfur dioxide (SO2) associated with the volcanic plume (visible emanations of volcanic gases) continues to record high values ​​and in line with the eruptive process, reaching values of 37,350 tonnes per day (probably an underestimated value). In the case of the diffuse emission of carbon dioxide (CO2), associated with the 220 km2 of the Cumbre Vieja volcanic ridge (non-visible volcanic gas emanations), a trend of this geochemical parameter was observed from 10/12 to 10 / 22 and since then an increasing trend has been recorded, with a diffuse emission of carbon dioxide (CO2) of 1.320 tonnes per day recorded on 26/10. The monitoring of the diffuse flux of carbon dioxide (CO2) in the geochemical station of Los Llanos de Aridane (LP10) reflects a higher magmatic-hydrothermal fraction than that observed in the geochemical station of Fuencaliente (LP08). The interferometry recorded by the Sentinel-1 satellite clearly shows us the deformation of the northeast flank of October 18, 2021 which almost resulted in an eruption in the Plaine des Osmondes area upstream of Piton Crac and to the east. from Faujas.
It remains to be seen whether a next crisis will occur in this sector or the opposite like the end of 2020.

To be continued soon with the monthly bulletin of the Volcanological Observatory of Piton de la Fournaise.