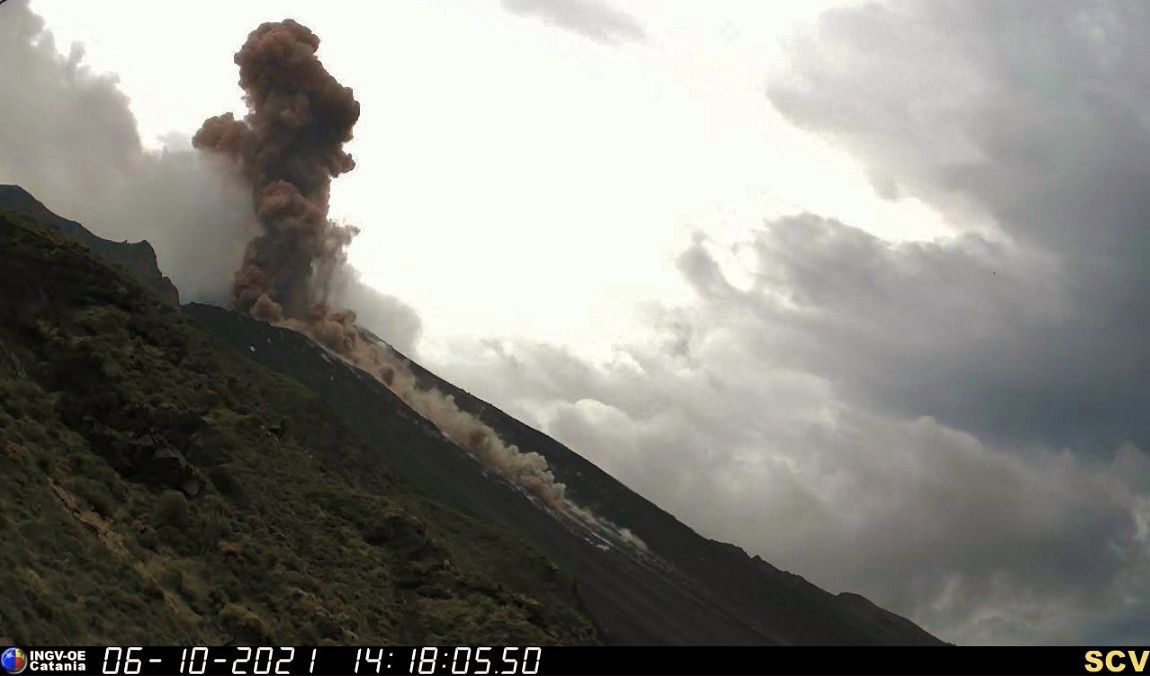 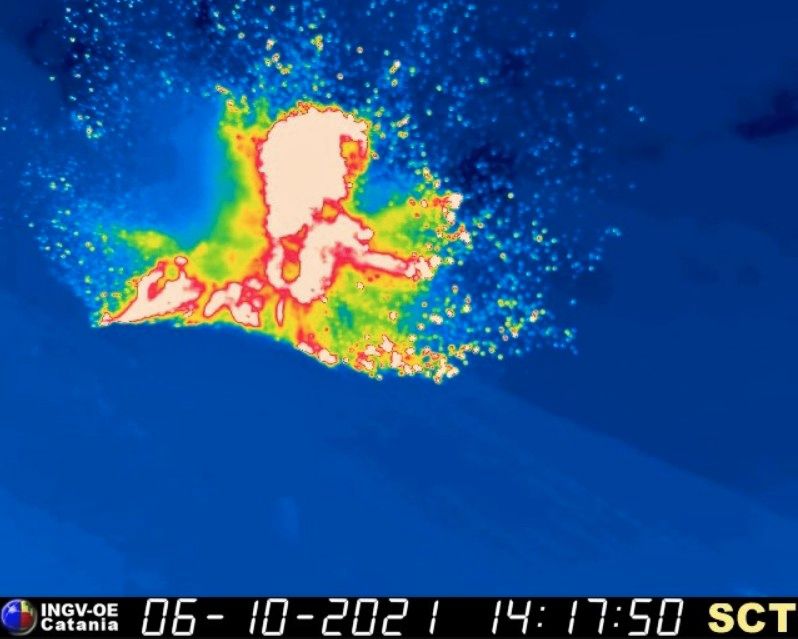 Surveillance networks recorded at 14:17 UTC on October 6, a major explosion in Stromboli, fed by the area of ​​the North crater. The event produced a large amount of coarse pyroclastic material, the fallout of which affected the area of ​​Pizzo Sopra la Fossa and Sciara del Fuoco, with the rolling of hot materials down the slope to the coast line.

The explosion generated an ash cloud which quickly dispersed in the NE direction. In addition, during the event, a small lava overflow from the northern crater area was also observed, the front of which remained confined to the upper part of the Sciara del Fuoco at an altitude estimated at around 750 m above sea level. .

In conjunction with the major explosion, a seismic event with a significantly above average amplitude was recorded.
As for the average amplitude of the tremor, it experienced a rapid increase at 14:17:40 UTC and moved towards high values. Subsequently, this parameter returned to medium-low values. The soil deformation networks do not show significant variations.

The weekly report, as of October 3, described normal strombolian-type explosive activity observed with a
hourly frequency fluctuating between medium and medium-high values ​​(12-18 events / h). The seismological parameters monitored did not show significant variations.

So many signs that this volcano remains unpredictable. A notice from Phivolcs from October 5 at 7 p.m. reports a sulfur dioxide flow of 25,456 tonnes / day, exceptional today at Taal volcano.

Emissions have averaged 8,850 tonnes / day since September 27, 2021, when the volcano was seismically quiet.

Sudden inflation of Taal Volcano Island was detected in August 2021, indicating re-pressurization of the underground hydrothermal system due to continued magmatic degassing.

The Taal remains in alert level 2, with recommendations not to access TVI and Daang Katilla crack.

The eruptive activity continues at Cumbre Vieja on La Palma, quieter, and seems to have entered a phase of stability on October 6. The volcano emits less lava, which flows channeled for the moment, and is characterized mainly by expulsions of gas and ash.

The feeding of the delta / fajana is done by lava tunnels, but like yesterday, overflows of new lava flows have buried new areas with plantations and structures.

The lava delta extends out to sea for more than 500 meters, over 38 ha. And reached a depth of 250 meters underwater. 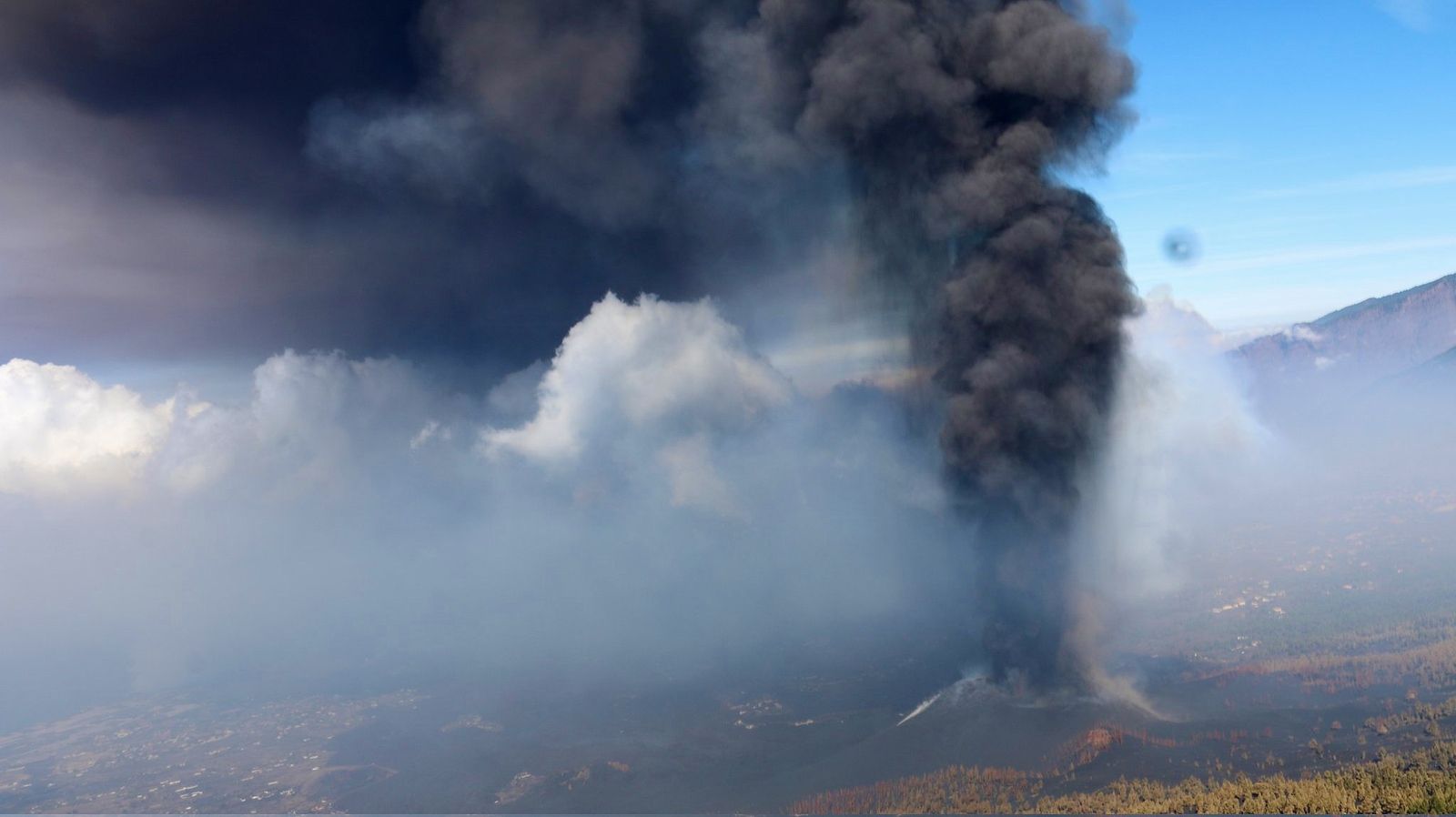 La Palma - the eruptive site of Cumbre Vieja on 06.10.2021 - photo InVolcan, aboard the Guardia Civil helicopter Since the last 24 hours (at 10 a.m. UTC, 6.10.2021) 41 earthquakes have been located in the area affected by the volcanic reactivation of Cumbre Vieja, a number lower than the two previous days. Six of the earthquakes were felt by the population, i.e. the maximum intensity in Epicentral Zone III (EMS) during an earthquake of magnitude 3.5 (mbLg) that occurred yesterday at 12:14 UTC. Five of the recorded earthquakes are greater than magnitude 3.5 (mbLg). Most of the hypocenters are located 10-15 km deep, except for 4 of the earthquakes with hypocenters at depths greater than 35 km.

The average amplitude of the volcanic tremor remains stable within a range of average values ​​compared to the observations measured during this eruption. No intensification pulse has been recorded during the last 24 hours.

The island's network of permanent GNSS stations shows slight deflation in the vertical component of stations near eruptive centers. Eruptive episodes are observed at Ili Lewotolok, with a height of 200-500 meters. The color of the plume is white and gray, the eruption is accompanied by bursts of incandescent lava and a weak, moderate to strong boom / rumble.