The eruptive activity of Cumbre Vieja continues on La Palma
As of November 111 at 07:00 UTC, 72 earthquakes have been located in the area affected by the reactivation and volcanic eruption of Cumbre Vieja, seven of which were felt by the population of the epicentral area.
It should be noted that most of the activity recorded in the last 24 hours is at depths greater than 30 km below the central area of ​​Cumbre Vieja. It is in this area that the largest earthquake was recorded at 03:37 (UTC) today and corresponds to an earthquake of magnitude 5.0 (mbLg) which was felt with a maximum intensity of IV-V (EMS) . This earthquake was followed by a dense swarm of earthquakes at the same depth.
The tremor signal continues to remain at low values, with an episode of significant intensification between 03 and 04 UTC, coinciding with the swarm of deep earthquakes. The island's network of permanent GNSS stations shows that after inverting the altitude on days 4 and 5 in station LP03, which is closest to the eruptive centers, it remains at a lower level than previously established. On the other hand, the southwest deformation recorded in the station still continues
In the rest of the stations, the slight deflation possibly linked to the deep seismicity has moderated.

The growth of the new fajana continues south of the previous one, with a large influx of lava so far. It is mainly increasing in width and already completely covers Los Guirres beach.

At around 3:30 p.m., a mouth that had previously emitted lava reactivated and it appears that there was a small overflow from the cone.

Regarding the air quality, it remains "good" or "reasonably good" in all seasons, with the exception of particular peaks in Los Llanos de Aridane at midday, where it has reached a regular or unfavorable level. Regarding sulfur dioxide emissions, "regular" levels are maintained in Puntagorda, but without exceeding the daily threshold. The weather conditions remain favorable for aeronautical operations. An automatic station of the "Multigas" type has been installed on the edge of the crater of the Fossa di Vulcano, near the fumaroles. After a first test phase, from November 4, the station began to carry out continuous measurements of carbon dioxide (CO2) by infrared spectrometer, sulfur dioxide (SO2) and hydrogen sulphide (H2S) , by electrochemical sensors, as well as environmental parameters such as atmospheric pressure, temperature and humidity. . The data is transmitted in real time to the acquisition room of the Palermo section by radio link via the Lipari observatory.

The installation on Vulcano is part of the activities of the extension of the monitoring network of the volcano, following the change of the alert level from green to yellow ordered by the Department of Civil Protection of the island of Vulcano. Images from Sentinel-2 and data from Mirova Modis show that activity has resumed in the Erta Ale caldera.

No recent news from visitors on site 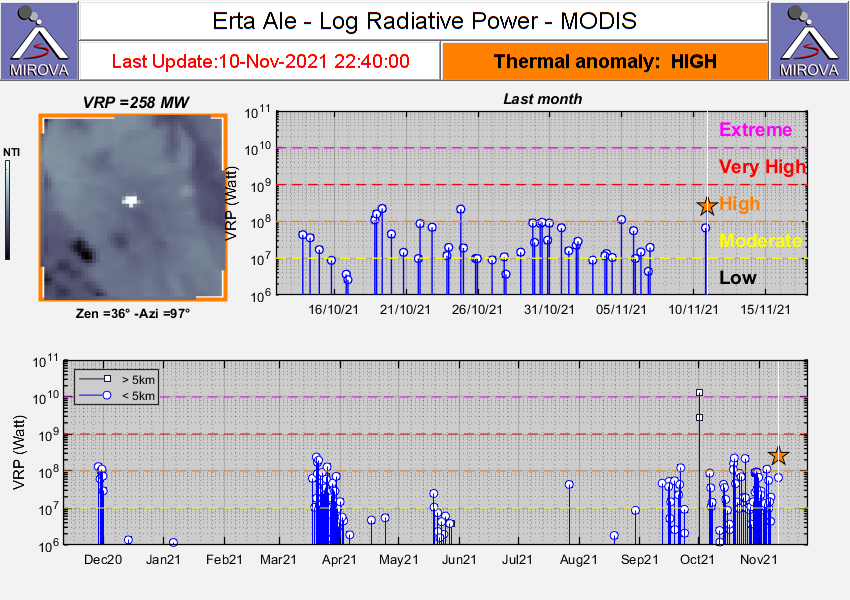 On November 11 at 1:21 p.m., an M5.2 earthquake occurred at Vatnafjöll in southern Iceland, about 7.5 km south of the Hekla volcanic system. The hypocenter was about 5.6 km deep

The earthquake was widely felt in southern Iceland and the capital region. Seismic activity started in the area around noon and there is considerable aftershock activity. The most important aftershocks are around M3.

According to Kristín Jónsdóttir, seismologist at IMO, this earthquake is similar to that of 1987. It occurred in the eastern part of the fault line, where the seismic and volcanic belts meet. So far, no sign of magma movements but probability of aftershocks. This opinion is shared by Magnús Tumi Guðmundsson, professor of geophysics.