At Cumbre Vieja, on La Palma, the volcanic activity seems calmer this November 9, although that does not mean that it sometimes has peaks of greater activity, like the tremor peak that we had at 6.30am of the morning and which lasted an hour, where several hydromagmatic explosions are seen in the spectrogram.

The lava flow passed the pre-existing front and reached the coast at Playa de los Guirres. Two lava falls occurred on Los Guirres Beach, on one side of the fajana / lava delta previously created by the main Cumbre Vieja flow. A third lava cascade was added to it in the afternoon. Thermographic measurements of the flows that enter the beach of Los Guirres were made from the patroller of the Gardia Civile. La Palma - Cumbre Vieja - 09.11.2021 - Thermal image shot of the lava flow that falls on the beach of Los Guirres. - the flows on the FLIR thermal camera, with in the background, another flow moving on the flow number 1 - Doc. InVolcan - one click to enlarge

The affected area reaches 988.27 hectares and the maximum width between the external flows remains at 3,100 meters.

Regarding the air quality due to PM10 particles in suspension, there was an improvement of the values, going from an "extremely unfavorable" to "unfavorable" situation in Los Llanos de Aridane, El Paso, Tazacorte, Puntagorda and Tijarafe . The sulfur dioxide emission associated with the volcanic plume continues to be high, with values ​​between 9,000 and 13,000 tonnes per day, but its temporal evolution reflects a decreasing trend. Regarding seismicity, it remains low compared to previous weeks and continues to be located in the same areas, at depths between 10 and 15 km and greater than 20 km. La Palma / Cumbre Vieja- image Sentinel-2 bands 12,11,4 du 09.11.2021- despite the cloud cover and the fumes from the volcano, we guess that the lava reaches the coast - one click to enlarge

This Tuesday began the urgent works that will allow a fast track, with greater capacity, which will allow the connection between Puerto Naos and Las Manchas. Half a dozen backhoe loaders from the company hired by the regional council have started earthworks to convert the Hoyo Verdugo road into a two-way road between Las Manchas de Abajo and the LP-213. Its execution is intended to make a land route more efficient to facilitate the collection of the goods of the expelled.

The Minister of Public Works, Transport and Housing of the Government of the Canary Islands, Sebastián Franquis, held a meeting on Tuesday with the mayor of the town hall of El Paso, Sergio Rodríguez, and with part of the municipal team, to supervise the land where the first modular houses will soon be installed to provide temporary accommodation to families affected by the eruption of the Cumbre Vieja volcano. Recent gas and visual observations at Whakaari / White Island show an increase in gas emissions and lake levels. The temperatures of the vents remain stable around 200-220 ° C. The volcano occasionally emits traces of volcanic ash and remains in a state of moderate to increased unrest. The volcanic alert level remains at level 2 and the aviation code at Yellow.

Sulfur dioxide rose to 681 tonnes per day, up from 267 tonnes per day in mid-October. Carbon dioxide emissions fell from 757 to 2,712 tonnes per day, while those of hydrogen sulphide also increased from 10 to 38 tonnes per day. These data show another pulse of gas escaping from molten material deep within the volcano.

The temperatures measured in the active ventilation zone ranged from 252 ° C to 202 ° C from September to October. In July and August, temperatures exceeded 500-600 °C.

The water level in the crater lake is slightly higher than what we observed at the end of October. Almost all of this increase is due to heavy rainfall.

Very low ash emission occurred during last week's sightings, but recent deposits are minor and visible only near active vents. 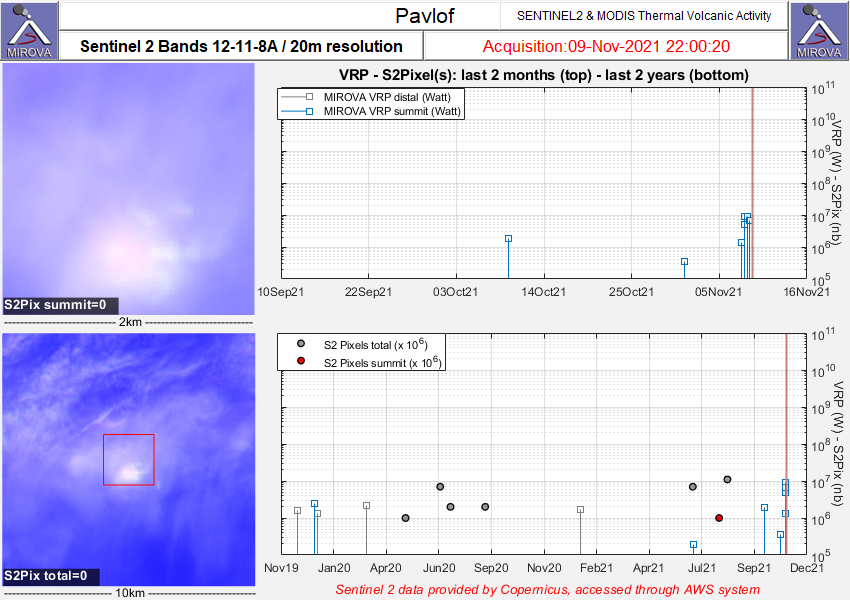 Seismicity remained high at Pavlof on the Alaskan Peninsula over the past day and satellite images show high surface temperatures near the active vent. This activity could be the result of a continuous lava effusion noted yesterday in satellite data. No ash deposits were visible on the clear webcam images of the volcano's flanks yesterday or today, or on the clear satellite images yesterday, suggesting that ash emissions are very minor or nonexistent.

Small explosions accompanied by low level ash emissions can occur at any time and are usually a hazard in the immediate vicinity of the summit. The level of restlessness at Pavlof can change rapidly and progression to greater eruptive activity may occur with little or no warning.

The activity of the main crater was dominated by the upwelling of hot volcanic fluids in its lake which generated a 1,500-meter-tall plume that drifted southwest. Sulfur dioxide emissions averaged 9,491 tonnes / day on November 9, 2021.

Based on ground deformation parameters from electronic tilt, continuous GPS, and InSAR monitoring, Taal Volcano Island began to swell in August 2021 as the Taal region continues to undergo expansion. very slow. since 2020.

Alert level 2 (increased unrest) prevails over the Taal volcano. DOST-PHIVOLCS reminds the public that at Alert Level 2, sudden explosions of steam or gas, volcanic earthquakes, minor ash falls, and fatal accumulations or expulsions of volcanic gas can occur and threaten areas in and around TVI.