On November 29, 2021, eruptions and bubbles were observed in the southern waters around the Ile Werung volcanic complex, Lembata Regency, East Nusa Tenggara. This incident led to a rise in sea level. According to residents' reports, the sea level rose on the night of November 28, 2021, from a height of less than 1 meter and a flood distance. of about 30 meters.

The Ile Werung volcano monitoring station recorded this eruption from November 28, 2021, starting around 9:52 p.m. WITA and lasting about 1 hour. On November 29, 2021, as of 5:17 a.m. WITA, the eruption and gusts were again recorded. So far, the eruptive activity is still ongoing; the eruptive plume rose to about 100 meters above sea level. This activity is reported about 1 km south of the Hobal submarine vent. Map showing the Ilewerung volcano, the Hobal Vent, and the known extent of the 1979 landslide that triggered a tsunami. Note that N is at the top right. Courtesy of VSI./ GVP

Considering that this eruptive activity is one of the manifestations of the activity of the Ile Werung volcano, the activity level of the Ile Werung volcano is raised from level I (normal) to level II (alert - waspada) from November 29 2021 at 10:00 a.m. WITA.
It is recommended that the community at this time avoid activities around the beach around the location area and avoid sailing / going to sea around the area to anticipate potential changes / elevation of the sea. sea ​​level.

Built on the southern edge of the Lerek Caldera, Werung Island forms a prominent south-facing peninsula on Lembata Island (formerly Lomblen). Lava craters and domes formed along the N-S and NW-SE lines on the complex volcano; during historical times, vents have been active from the top to the SE submarine side. The summit lava dome was formed during an eruption in 1870. In 1948, the Iligripe lava dome developed on the E flank at an altitude of 120 m. From 1973-74 when three ephemeral islands formed, underwater eruptions began on the lower SE flank at a vent named Hobal; several other eruptions took place from this vent before the turn of the century. (GVP) La Palma / Cumbre Vieja - pyroclasts and gases emitted by the new cone of the northern flank on 29.112.2021- video screenshot EADSuarez

The eruptive activity of Cumbre Vieja continues on La Palma.
As of November 29) 09h UTC, a total of 128 earthquakes have been located in the area affected by volcanic reactivation on the island of La Palma, of which 6 were felt by the population, in the last 24 hours.

Seismicity continues below the central area of ​​Cumbre Vieja in the same areas of the previous days, 101 of these earthquakes are located at depths of 10 to 15 km and the rest at depths of 20 km.

The maximum recorded magnitude is 5.0 (mbLg) corresponding to today's earthquake at 8:35 UTC, with a depth of 35 km and a direction of intensity IV-V (EMS98).

Average values ​​of the tremor (today it has decreased)

Inversion of elevation in LP03 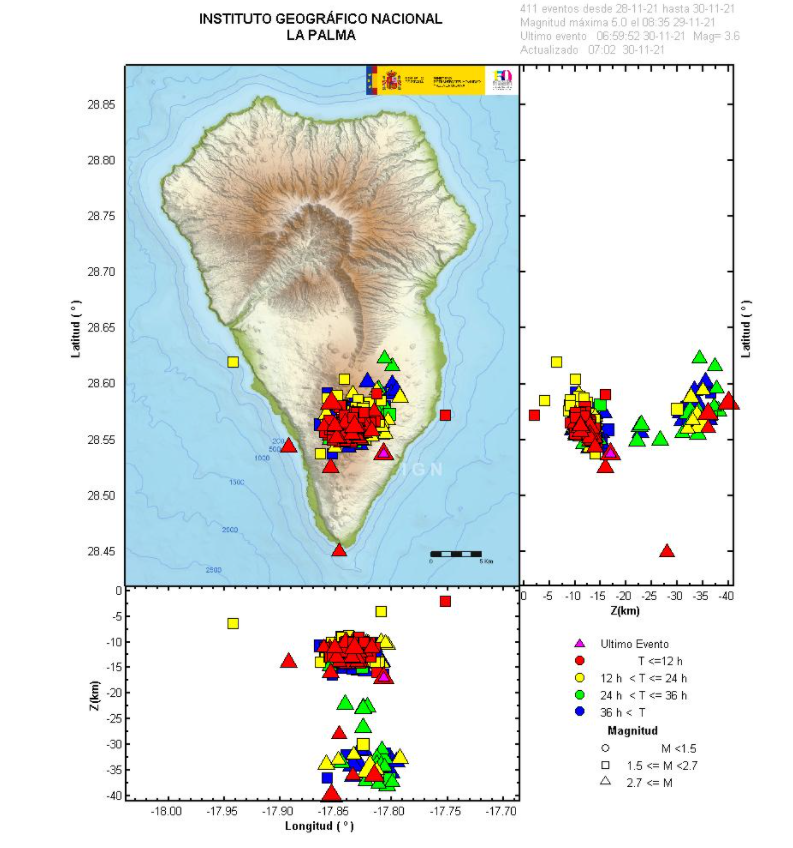 At the end of the morning yesterday, the lava flows from the northern flank were carrying large blocks. New land is affected south of the Sombrero roundabout. The lava is heading towards Cruz Chica.

PEVOLCA is monitoring the new north-westerly flow which has slowed its progress towards the Laguna.

In addition, it indicates that the activity of the main emission centers has declined, which is currently focused on the eruptive sources which opened last Sunday.
Overflow in one of the new lava channels in the upper Tacande area this afternoon. The air quality has improved and reflects good rates in all seasons, except in Los Llanos de Aridane and Puntagorda, which are controlled. On the other hand, the current favorable scenario for airport operations is expected to continue in the coming days. Compared to seismicity, the tremor values ​​coinciding with the magmatic activity have decreased, returning to their low value. At intermediate depths there has been an increase in earthquakes, being located in the same areas and at depths greater than 20 kilometers, they remain at low levels. The area affected by lava is estimated at 1,115.82 hectares, a figure pending review, with a maximum width of 3,500 meters. The ice cap at the top of Grimstvötn continues to subside and does so at an accelerated rate: compared to a week ago, the surface has sunk by more than 6 meters, but with an acceleration of the phenomenon in the last 48 time.

According to Civil Defense geologist Björn Oddsson in an article on Grapevine.is, "meltwater collects under an ice cave that sits at the top." He estimated the total volume of water involved to be around one cubic kilometer.