Three small phreatomagmatic bursts were recorded in the main crater of Taal by the volcano's monitoring network at 8:11 a.m., 8:17 p.m. and 8:34 p.m. on November 22, lasting one to five minutes based on the seismograms.

Since November 15, there have been six recorded phreatomagmatic bursts, which may have been caused by the breaking of rocks and the release of volcanic gas from the magma under the island of the Taal volcano.

DOST-PHIVOLCS reminds everyone that alert level 2 is still high today on the Taal volcano, so that a steam or phreatic eruption, volcanic earthquake, partial ash and accumulation or emission Dangerous volcanic gas can suddenly occur and ravage the surroundings of the island of Taal or TVI volcano. No visible eruption is reported in Poas / Costa Rica.
Seismic activity is weaker than yesterday.
At the time of this report, the winds are blowing from the southwest.
There are no eruptions or volcanic tremors. The activity of the fumaroles remains low through the fumaroles in the walls of the eastern sector of the active crater. Seismicity is practically zero.

No significant concentration of magmatic gas is recorded. The gas monitoring system in the western sector of the active crater has measured concentrations of SO2 between 0.4 and 1.3 ppm and H2S between 0.06 and 0.16 ppm over the past 24 hours. The odor of H2S is detected at the point of view of the visitor, while the witness ExpoGAS detected less than 0.5 ppm of SO2 in the air around the point of view. The deformation of the volcanic building remains stable.

The ultra-acidic lake has a milky green color and recorded a temperature of 35 degrees Celsius on November 19, 2021.

In La Palma, 76 earthquakes were located in the area affected by the volcanic reactivation of Cumbre Vieja in the last 24 hours, most of which were located at depths greater than 30 km. Six of the earthquakes were felt by the population.
The largest earthquake was recorded at 08:09 UTC today with a magnitude of 4.8 mbLg and reached a maximum intensity of IV (EMS98) in the epicentral zone.
The tremor signal continues at low values, similar to previous days.

In the rest of the stations, the slight deflation possibly linked to the deep seismicity has stabilized.

In view of the image calibrated at 08:45 UTC, a column height of 3000 m is estimated, and a cloud diffusing in the easterly direction. Lava flow 4, located between Montaña Todoque and Montaña Laguna, joined flow 7 and they finally touched the sea at a new point further north than the previous ones at 12:00; we note the formation of a new lava delta closer to the port of Tazacorte.

Following this entry into the sea, the PEVOLCA orders the confinement of the population in San Borondón, Tazacorte and the extension from El Cardón to Camino Los Palomares in the north.

The air quality in the municipalities of Los Llanos de Aridane and El Paso is "extremely unfavorable". The hourly level of 750 µg / m³ of sulfur dioxide was exceeded at the Llanos station at 10:15 pm on Monday.

Strombolian activity persists with pulses of pyroclast and ash emission. 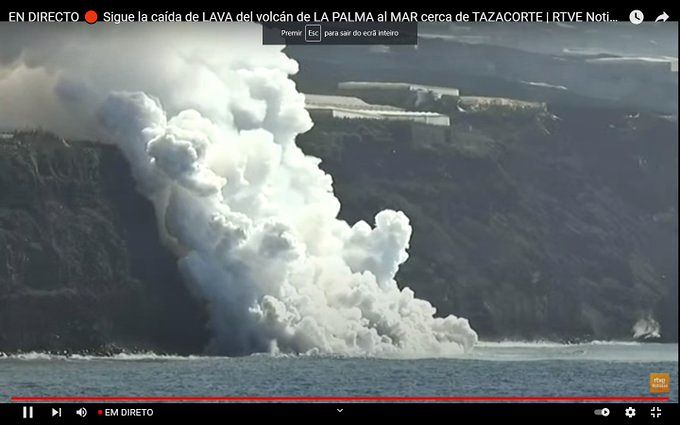 It has been several days since the drainage channel was flooded and almost completely covered by the gradual regrowth of the lava walls that form it (as it cools). Near the skylight which lets see the effusive lava coming out, we can see the salts which crystallized on the surface of the material expelled during the eruption. Some are white and some are more yellowish (because of the sulfur). The large amount of water vapor and gas that the lava gives off at this point is still striking. - Doc. IGME At Pacaya, the Insivumeh observes the Mackenney crater with a white fumarole moving west from the volcanic building at a distance of about 4 kilometers. At the moment, no explosion is observed or no sound is heard. The possibility of generating ash explosions and the appearance of new lava flows is not excluded.

The recommendations of the Special Bulletin BEPAC 103-2021 must be maintained: no ascent of the Mackenney crater authorized, do not stay in the area of ​​the cracks because they are exposed to explosions, avalanches, burns and subsidence, which can cause serious damage. 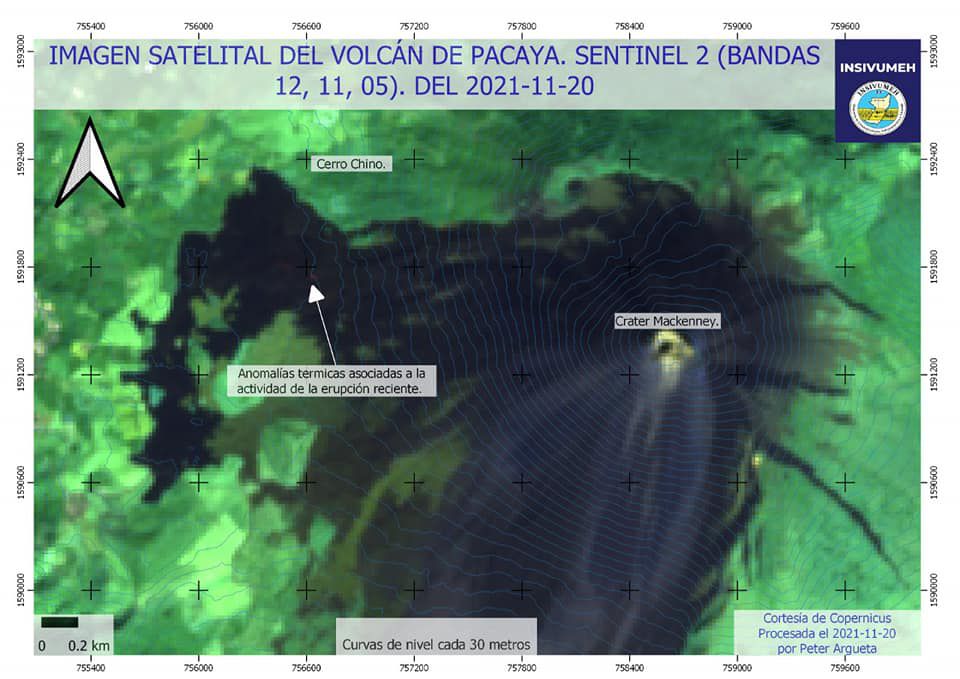