The event recorded a maximum of ML 2.9 and lasted two minutes based on the seismic record and produced a series of four short-lived plumes less than a kilometer high based on the thermal camera recording. The characteristics of the seismic signal of the event are similar to the phreatomagmatic bursts that occurred in July 2021.

DOST-PHIVOLCS reminds the public that Alert Level 2 (increased unrest) prevails over the Taal volcano and that sudden steam or gas explosions, volcanic earthquakes, minor ash falls and build-ups or expulsions Fatalities from volcanic gas can occur and threaten areas in and around TVI. The seismic activity at La Soufrière in St Vincent has continued to decrease since the tremor associated with the explosion and the evacuation of ashes on April 22.

Small lahars were recorded on October 31.

Current activity corresponds to a period of unrest after a rash. This can last for weeks or even months. While volcanic activity is on the decline, there is the continued presence of hot spots near the surface, daily seismic activity, and persistent outgassing.
There is a small, but not insignificant, possibility that magmatic activity will resume in the event of an influx of new magma from the depths.

The volcano is at the YELLOW alert level. - The temperatures recorded both on the rim of the crater and on the flank inside are increasing slightly.

- CO2 flux in the crater area: the latest data; CO2 flux at the base of the La Fossa cone and in the Vulcano Porto area: very high CO2 flux values ​​at the sites of Rimessa, C. Sicilia and Palizzi (P4max); values ​​consistent with those of the last week on the Faraglione site (dated 20.10.202) indicated very high values.

- The flow of SO2 occurs at a high level of degassing. 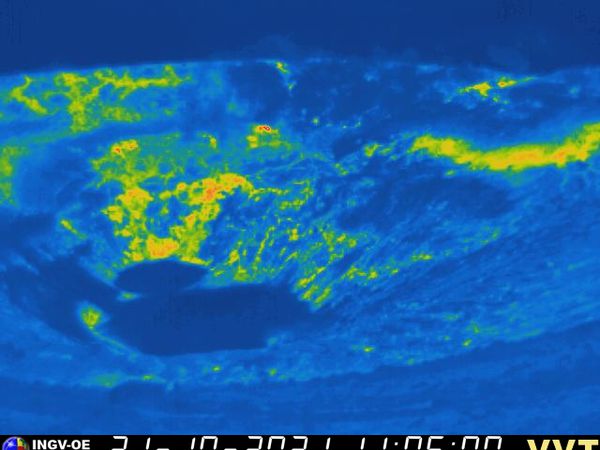 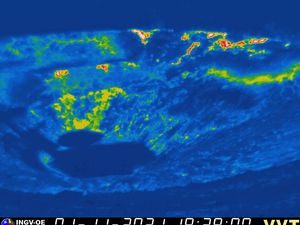 Regional seismicity: Modest fracturing seismicity with Ml> = 1.0. A cluster of weak earthquakes
(maximum Ml equal to 2.2) occurred in a focal volume located about 3 km east of the port of Ponente.

- GNSS data show that after the strong variations recorded between mid-September and mid-October, during the last week, there were no significant deformations

Gravimetry: There are 3 slight variations in amplitude, of a local nature,
visible only at the VSOCR station.

La Palma / Cumbre Vieja - 02.11.2021 - Emission centers lined up along the crack. Strombolian emission of lava, gas and pyroclasts from the upper eruptive centers of the volcano. - vidéo IGME

In La Palma, the levels of activity visible at the Cumbre Vieja cone are highly variable, with Strombolian emissions of lava, gas and pyroclasts from the upper eruptive centers of the volcano.

The volcanic tremor recorded a significant drop in its values, followed by a small rise.

The declining emission values ​​of carbon dioxide and sulfur dioxide, however, remain high.

Electrical activity (lightning) was reported in the ash plume on 03.11 at around 4 p.m. local time.