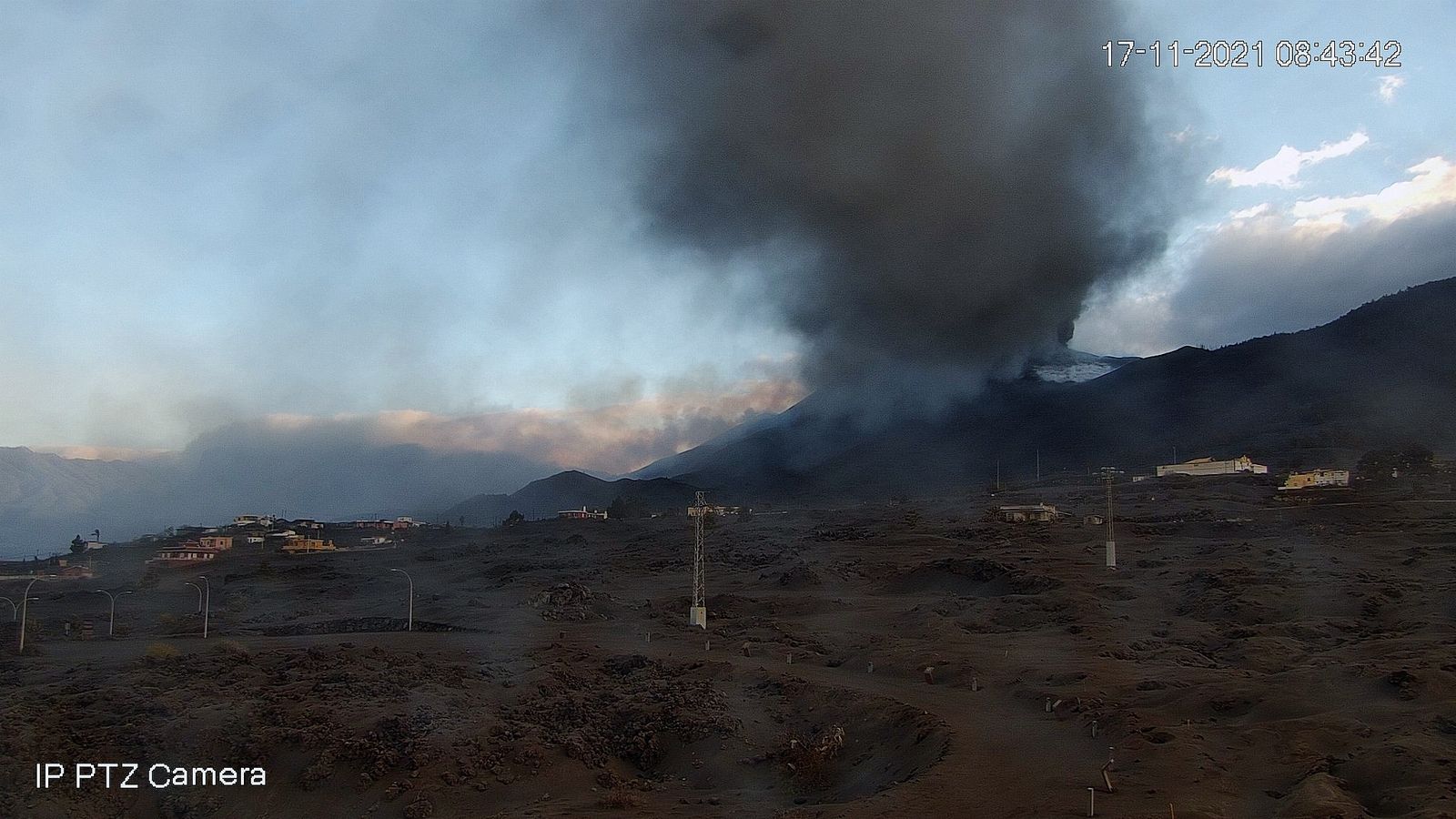 PEVOLCA informed, that yesterday 17 November 2021, the high rate of ash emission continued at Cumbre Vieja, recording unfavorable levels of air quality in Los Llanos de Aridane and Puntagorda, and regular at Tazacorte. The attached photos - one click to enlarge - show the variations in activity during the day.

Since Tuesday afternoon, a notable rebound in seismicity has been maintained at intermediate depths, in number and magnitude. According to experts, this could be due to a readjustment or a resupply of the system.

On the other hand, the lava flow continues through the central zone and to a lesser extent through the lava tunnels towards the deltas, and since yesterday afternoon a new lava flow has been circulating between the Todoque mountains and the Laguna at 70 kilometers per hour.

The affected area is around 1,037 hectares and, according to Copernicus' estimates, there are 2,734 buildings affected, most of them destroyed. 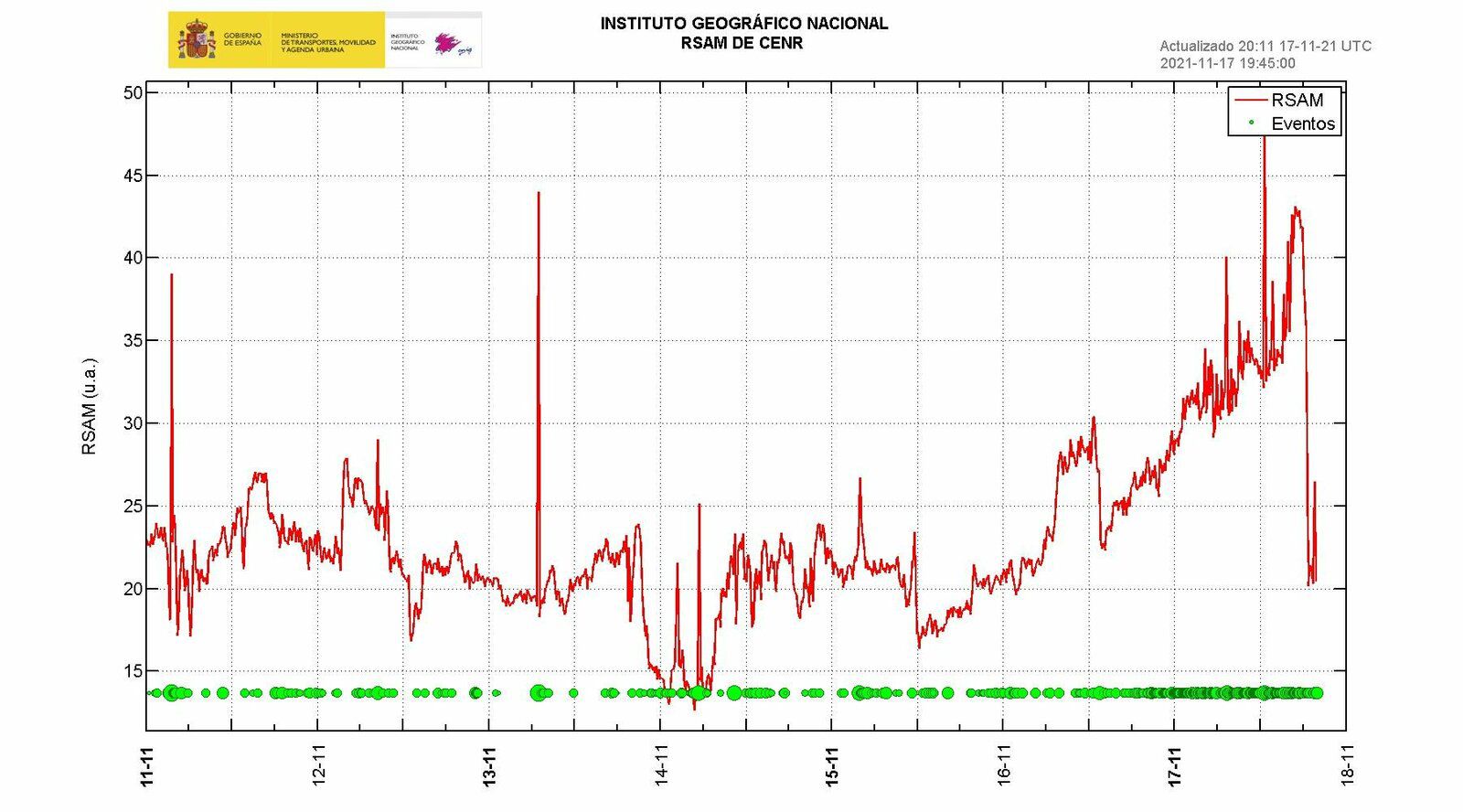 A short, low-intensity seismic crisis was recorded on November 17 between 6:12 p.m. (T.U., 10:12 p.m. local time) and 6:26 p.m. (UT, 10:26 p.m. local time), under the summit area of ​​Piton de la Fournaise. A total of 42 superficial volcano-tectonic earthquakes located under the northern edge of the Dolomieu crater were recorded during this crisis. 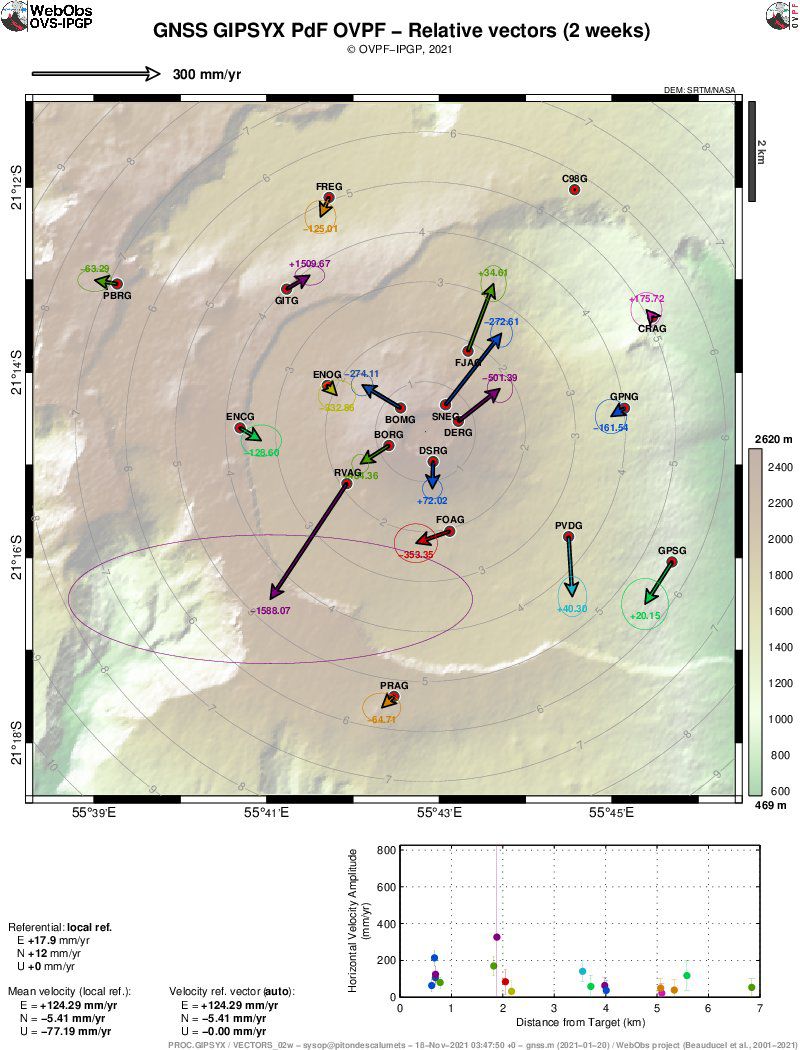 Piton de La Fournaise - Ground displacements (expressed in speed) recorded on GPS stations inside and around the Enclos Fouqué during the last fifteen days. The horizontal displacements are represented in vector form and the vertical displacements are indicated by the numerical values ​​in color. The ellipse represents the measurement error (© OVPFIPGP 18,11,2021)

In Iceland, GPS counters showed in late August that from mid-September terrain began to rise north of Keilir on the Reykjanes peninsula and south of the eruptions at Fagradalsfjall. However, inflation is very low, about two centimeters where it is highest.

According to the models of the Meteorological Office, the source of the deformation lies at a great depth, and the most likely explanation is the accumulation of magma. It is likely that the earthquakes at the southern end of Keilir, which began in late September and lasted for about a month, are linked to this deformation. However, no deformation of the surface was observed in connection with the eruption, which would mean that there are signs that the magma has approached the surface.
Magma buildup sometimes occurs under volcanic systems after eruptions.

No lava flow has been seen from Fagradalsfjall crater since September 18. Gas emissions are still measured, but in very small amounts.

(Subject to incorrect translation from Icelandic) The Ovsicori reports a small area of ​​incandescence visible on the southwest inner wall of the Turrialba summit vent on November 11. Vigorous degassing was recorded at this vent.

The volcano's activity level fell from 2 to 3, on a scale of 5, in early November. The rainy season in Indonesia can cause damage. This Tuesday, November 16, on the island of Java, landslides affected the sub-districts of Tosari and Tutur, affected by incessant rains. The landslide in Tosari even closed access to the Bromo volcano and the road could only be traveled by one vehicle.

On Sumatra, heavy rains caused significant degassing in Sinabung. The activity level remains at 3 / siaga. Seismicity does not reflect significant changes in activity. Sinabung - degassing under the effect of rains on 11.17.2021 - photo Nachelle homestay