The eruption of Cumbre Vieja de La Palma, which began on September 19, was active for 70 days yesterday.

The PEVOLCA report indicates the appearance of new emission centers, which have opened up in the NE sector of the cone and the effusive flows they emit are moving in the NW direction. New centers located at a lower level have effusive activity, and those located at higher altitudes exhibit Strombolian and phreatomagmatic activity. IR thermography allows you to see what cannot be observed by visible spectrum cameras, such as the size and distribution of the rash mouths.

This results from a new surge of magma which was announced by the inflation recently observed yesterday and the day before. Instead of erupting through the existing vents at the cone, like Thursday, the magma chose to create new vents nearby - likely, the older ducts at the cone have become too high and too "hard" to. reach relative to the creation of new cracks at the base of the cone. La Palma / Cumbre Vieja - IR thermography allows you to see what cannot be seen by visible spectrum cameras, such as the size and distribution of the rash mouths. - photos InVolcan - one click to enlarge

The Pevolca informed the population about the air quality in the presence of sulfur dioxide emissions: it is considered "very unfavorable to Tazacorte, Los Llanos de Aridane and El Paso", with an exceeding of the alert rate of 500µg / m³ for 3 consecutive hours. The SO2 concentration reached 724 µg / m³.

Seismicity at intermediate depths has increased and continues to be localized in the same areas. At depths greater than 20 km, it remains at low levels. Regarding the wind arrangement, the ash cloud and SO2 are expected to continue to move west-southwest for at least the next 24-48 hours, which represents a favorable scenario for the operation of La Palma airport. Cumbre Vieja - New emission centers within sight of the drone. They have opened in the NE sector of the cone and the effusive flows they emit move in the NW direction. - Video CSIC- IGME 28.11.2021

In the past 24 hours, the Taal volcano network has recorded eight volcanic earthquakes, including seven volcanic tremor events lasting 2-3 minutes, one low-frequency volcanic earthquake, and one earthquake of low level which has persisted since July 7, 2021..
The activity of the main crater was dominated by the upwelling of hot volcanic fluids in its lake which generated plumes 500 meters high that drifted southwest. Sulfur dioxide emissions averaged 4,084 tonnes / day on November 27, 2021.
Based on ground deformation parameters from electronic tilt, continuous monitoring by GPS and InSAR, Taal Volcano Island and Taal region began to deflate in October 2021.

Alert level 2 (increased unrest) prevails over the Taal volcano. DOST-PHIVOLCS reminds the public that at Alert Level 2, sudden explosions of steam or gas, volcanic earthquakes, minor ash falls and fatal accumulations or expulsions of volcanic gas can occur and threaten areas in and around TVI. DOST-PHIVOLCS strongly recommends that entry into the volcanic island of Taal, the permanent danger zone or PDZ of Taal be strictly prohibited, especially the surroundings of the main crater and Daang Kastila fissure, and prolonged stays on Taal lake. 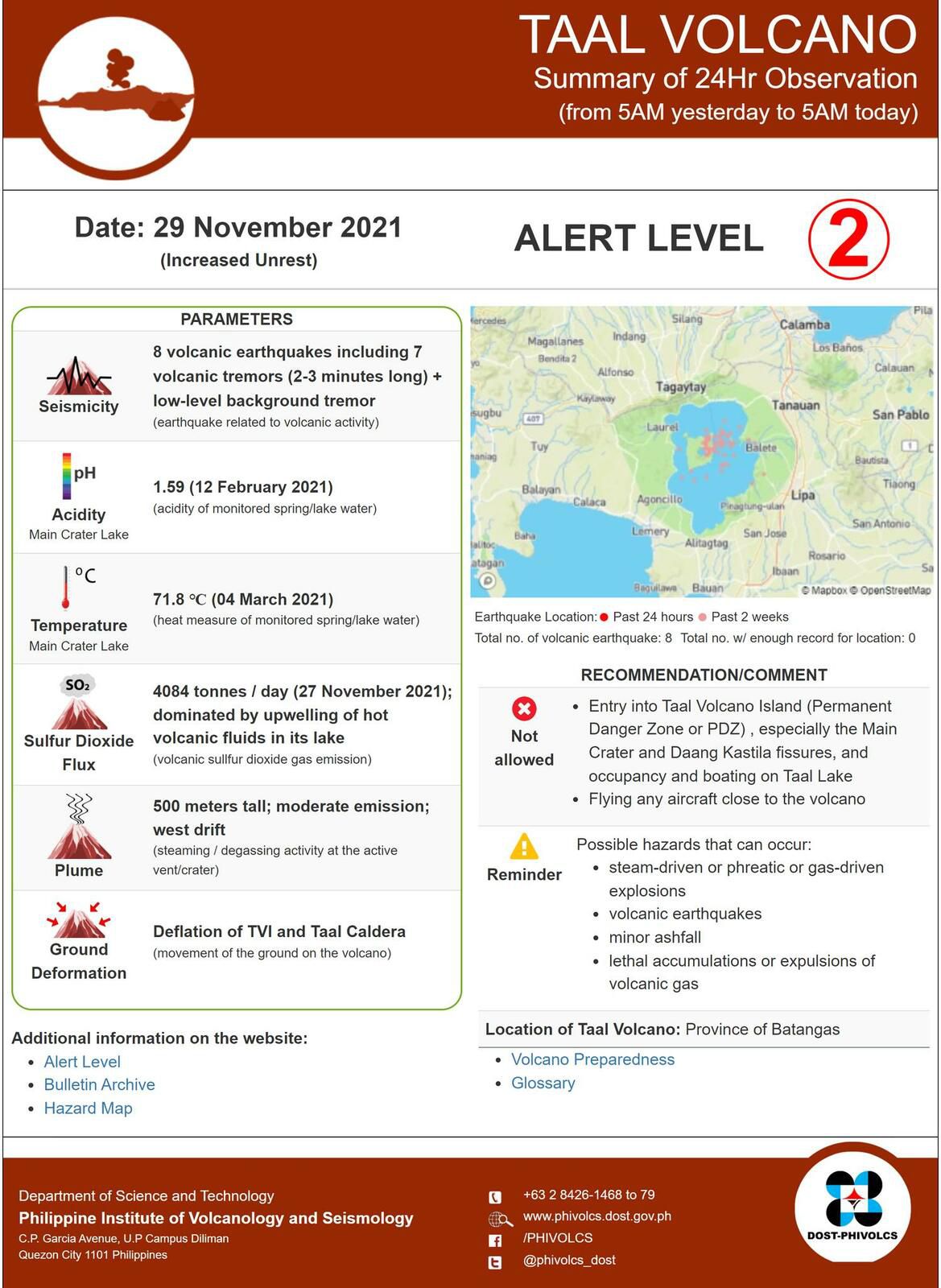 From 11:00 a.m. (TL), thanks to the cameras of the IG-EPN, an emission of water vapor and gas was observed from the crater of the Cotopaxi volcano, which reached 800 meters above the summit level .

These emissions are associated with the transformation into steam of the intense rains that have occurred in the area in recent days. The prevailing northwesterly and northwind direction causes gases to be perceived by climbers in the upper area of ​​the volcano.

In this context, there is the possibility of phreatic explosions. These explosions are difficult to predict and can be dangerous for people near the crater. In addition, exposure to high concentrations of volcanic gases can affect human health.