Activity of La Fournaise, Sabancaya, Suwanosejima, in the Reykjanes Peninsula and on Ambae. The eruption that began at Piton de La Fournaise on 12/22/2021 at around 3:30 a.m. local time continues. Over the last 24 hours the amplitude of the eruptive tremor (indicator of an emission of lava on the surface) shows less rapid fluctuations than the previous days. The amplitude of the tremor is this morning at about 35% of its initial amplitude. The relative stabilization of the tremor, perhaps linked to the consolidation of the cone, which has now reached a size making it more stable. The lava tunnel activity set up at the foot of the cone since December 23, thanks to the closure of the cone, continues, with occasional resurgences of flows. Lava fountain activity within the cone is low, and lava fountains exceed the height of the cone (<15m) only intermittently. Piton de La Fournaise - Morning activity of the volcano on 12/28/2021, with a view of the flows downstream of the cone - Doc. OVPF / copyright PGHM)

- The lava flow estimates, established by satellite method with the HOTVOLC platform (OPGC - Clermont Auvergne University), are between 2 and 8 m3 / sec. These variations are explained by the method, which is based on the infrared radiation of the flow, the perception of which by satellites can be largely influenced by the weather conditions above the flows.

- The front of the flow, in graton, currently on a relatively flat area, does not seem to have progressed significantly since yesterday. 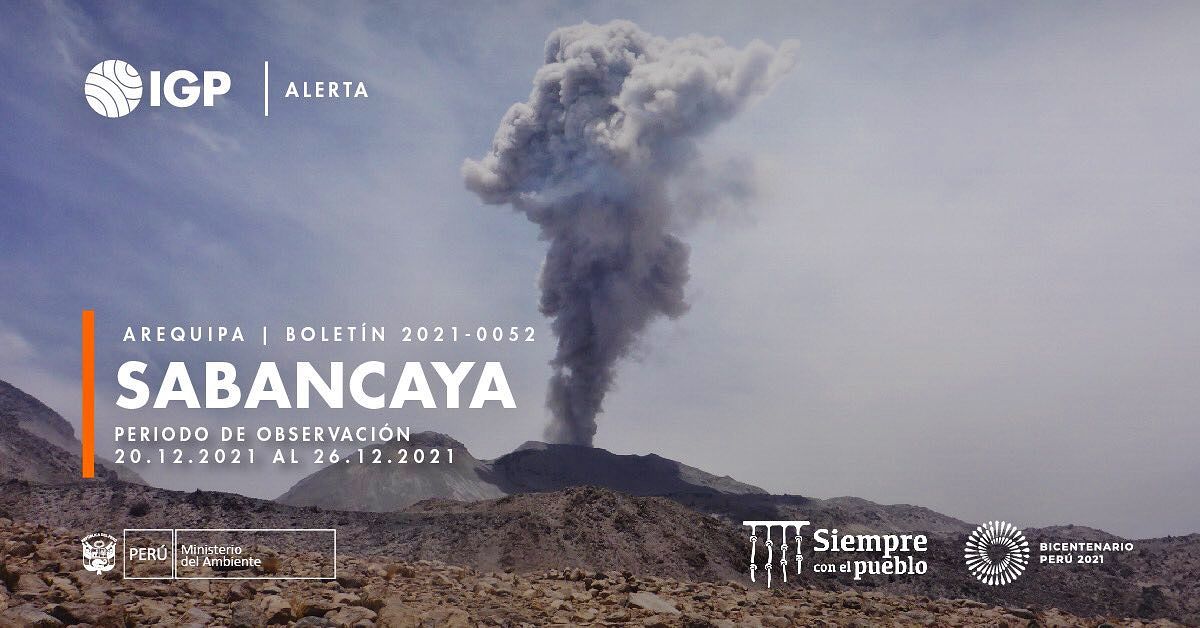 I.G.Peru informs us that the eruptive activity of Sabancaya remained at moderate levels during the week of December 20 to 26, 2021. It notes an average of 27 explosions per day, which generated plumes of gas and ash reaching a height of 2,500 meters above the summit.

During this period, 512 earthquakes of volcanic origin, associated with the circulation of internal magmatic fluids were detected and analyzed. VT earthquakes, related to the fracturing of rocks, occurred in the northwest, north and east region of the volcano, of magnitudes between 1.9 and 2.9.

No significant abnormalities of deformation. ; two thermal anomalies were identified, with a max. of 4 MW, associated with the presence of a lava body on the surface of the crater.

JMA reports that between December 24 and 27, 2021, the number of explosions at Ontake Crater in Suwanosejima increased, with a provisional figure of 361 episodes. The projections reached up to 1,500 meters above the crater rim, and large bombs were thrown up to 800 meters from the center of the crater.

The alert level is 3 / entry restrictions on the volcano Since the seismic swarm began on the Reykjanes Peninsula on December 21, more than 18,000 earthquakes have been detected, including a magnitude of 4.0 or greater. The past 24 hours have slightly reduced seismic activity, and the largest earthquakes have occurred outside the area where magma would accumulate.

An earthquake rocked the southwest corner of Iceland at 8:25 a.m. this morning. According to figures from the Icelandic Meteorological Office website, it measured 3.6 km, 3.7 km north of Krýsuvík and a depth of 4.3 km.

Three earthquakes around magnitude 3 occurred on the Reykjanes peninsula in the same minute in the early afternoon. (RUV 12/27/2021 / 2:23 p.m.)
The former had its epicenter 7.8 kilometers southwest of Raufarshólshellir, which is further east and closer to Þorlákshöfn than usual.
Five seconds later, a magnitude 3.4 earthquake struck 1.5 kilometers southeast of Fagradalsfjall.
The third, an M3, rocked Krýsuvík a second later. This earthquake occurred at a depth of barely 100 meters. 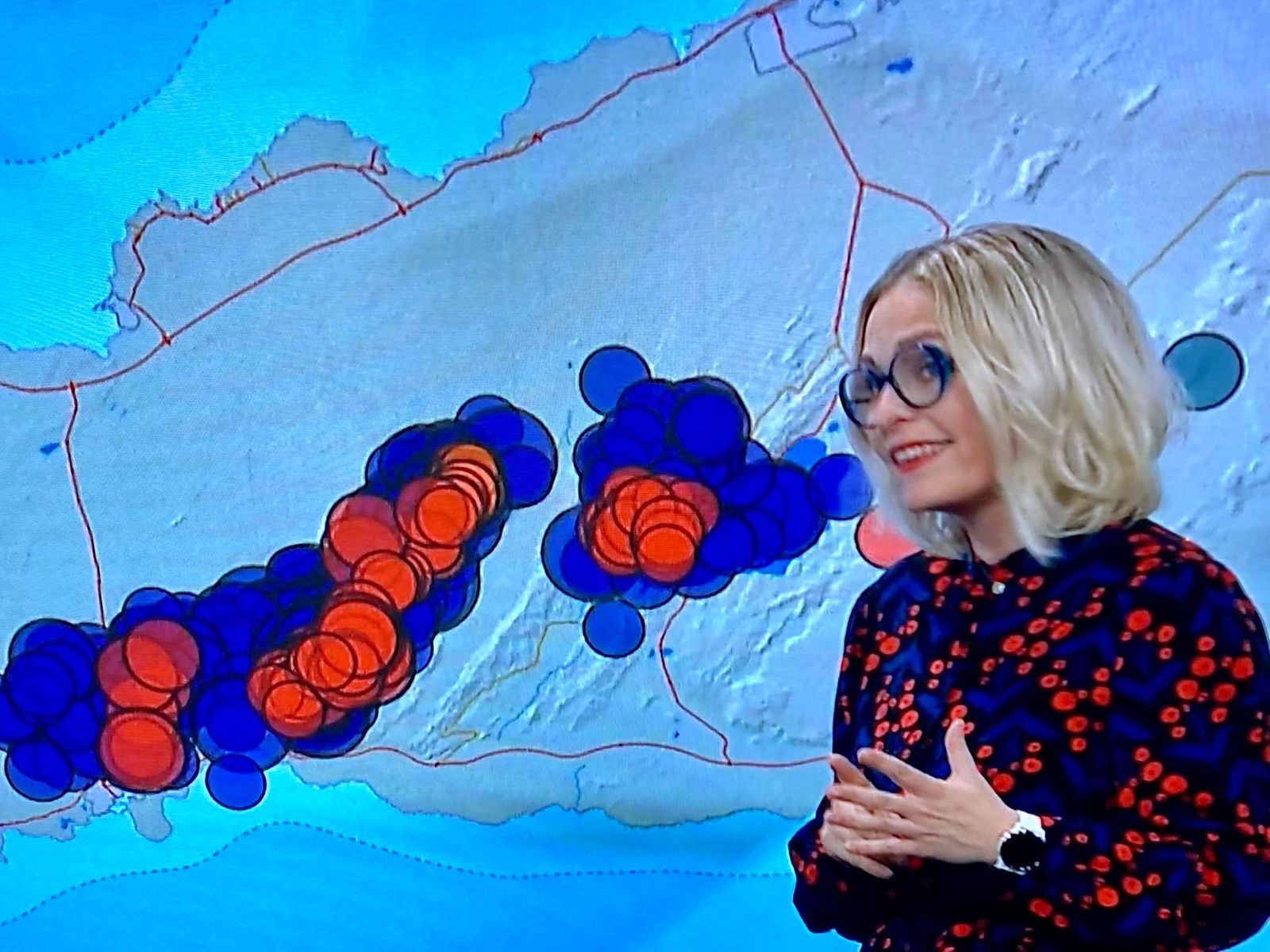 Kristín Jónsdóttir, group leader for nature monitoring at the Icelandic Meteorological Bureau, says it is not known exactly how close the magma is to the surface, but based on the latest models the greatest expansion is at a depth of two kilometers and it may be expected to approach the surface in the near future. They had started seeing signs of magma at a depth of two kilometers three weeks before the March eruption.

Kristín believes a new eruption in the area is likely and will likely occur very near Fagradalsfjall, where an eruption has continued for six months this year. Volcanic activity on Ambae Island, Vanuatu has now grown from minor unrest to major unrest. The volcanic alert level has gone from level 1 to level 2.

Since December 5, 2021, volcanic activity consists of the emission of steam and explosions of wet tephra ejected over the surface of the lake. New analyzes suggest that the activity of the Ambae volcano has increased considerably.

The danger zone (Danger zone A) is approximately 2 km in radius compared to the 2017-2018 active vents. An additional danger zone is found in areas of runoff during heavy rains, with remobilization of remaining ash from the eruptions of 2017 and 2018.

New observations have confirmed that the volcanic cone has built up inside Lake Voui and that the Ambae volcano continues to emit volcanic gas and ash.