After the intense activity of this Saturday, eruptive episodes followed at Semeru on December 5 and 6, 2021: The Vona remains red; According to VAAC Darwin, the ashes could not be identified by satellite, due to my cloud cover. The pyroclastic flows continue according to observers on the ground. The INGV OE reports to on December 4 09:55 loc. sporadic and diluted ash emissions from the south-eastern crater of Etna. Due to cloud cover, observations are made discontinuously. From the seismic point, the tremor increases slightly on the average values. The infrasonic activity is at low levels and does not show significant changes.

Strombolian activity is observed at the southeast crater from 4:10 p.m. GMT.
From the seismic point of view, the gradual increase in the amplitude of the tremor continues. An increase in infrasound activity is also observed from 3 p.m.

Strombolian activity continued at the southeast crater during the day on December 5. The activity produced some sporadic ash emissions scattered around the summit area. At dusk, a few glimmers are observed in the clouds, but due to the presence of dense cloud cover in the summit area, it was not possible to assess the intensity and frequency of the explosions.
The amplitude of the tremor is stable on average values ​​and its location remains close to the south-eastern crater. As of 12.05.2021 10h UTC, a total of 36 earthquakes have been located in the area affected by the volcanic reactivation of Cumbre Vieja on the island of La Palma, none of them were felt by the population.
Seismicity continues below the central area of ​​Cumbre Vieja in the same areas of the previous days, 33 of these earthquakes are located at depths of 9 to 17 km and only 3 at depths greater than 34 km. The maximum recorded magnitude is 3.4 (mbLg) corresponding to two earthquakes yesterday, at 12:19 UTC and 14:48 UTC, with depths of 36 km and 13 km respectively.
The amplitude of the tremor signal remains weak and more stable than the previous days. 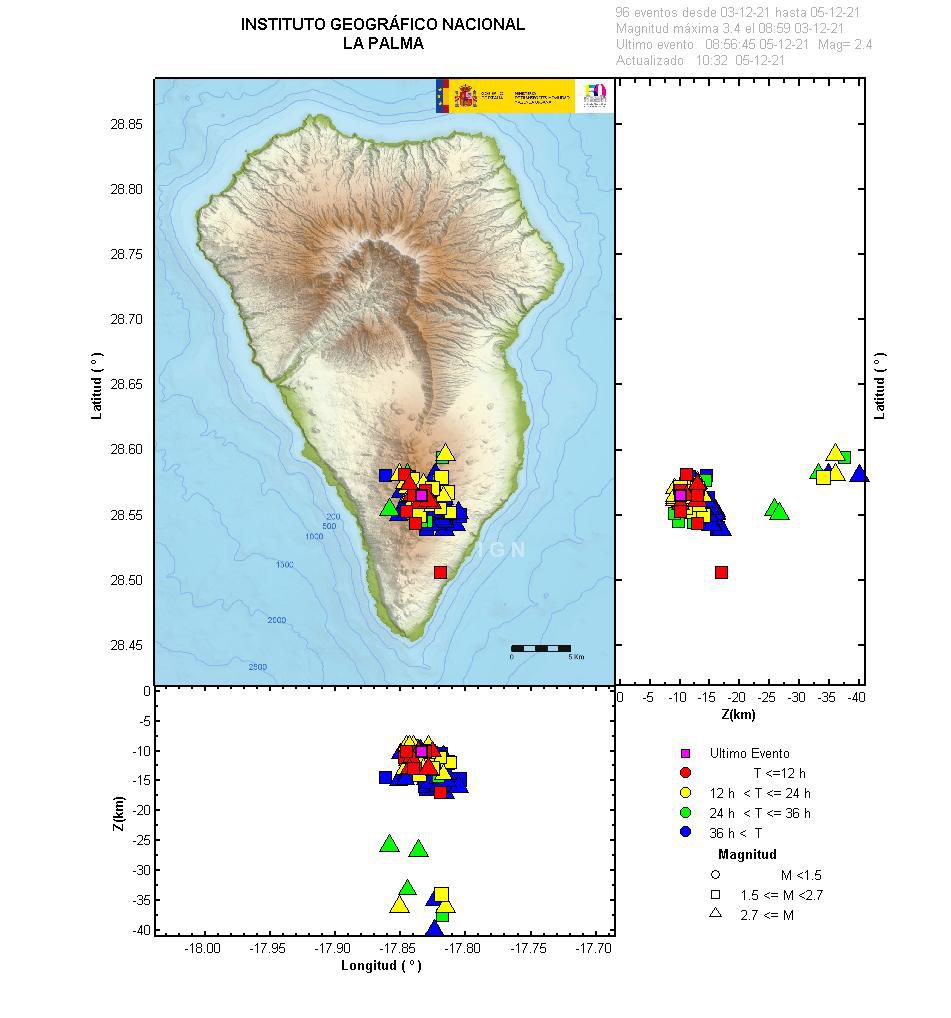 The lava emission continues, produced by new cracks that have opened to the west of Montaña Cogote, affecting a new surface of dwellings in an area already evacuated. A total of 9 vents and two major fissures have been more or less active since December 4 in this southern area.

Strombolian activity is noted in the late afternoon at the northern mouth. Note that large cracks have opened in the main cone.

In view of the image calibrated at 08:45 UTC, a degassing cloud height of 1400 m is estimated.
The height of the cone is measured by obtaining a value of 1,124 m. asl.

Regarding the air quality due to sulfur dioxide (SO2), yesterday the levels remained between reasonably good and regular in almost all the stations of the island. 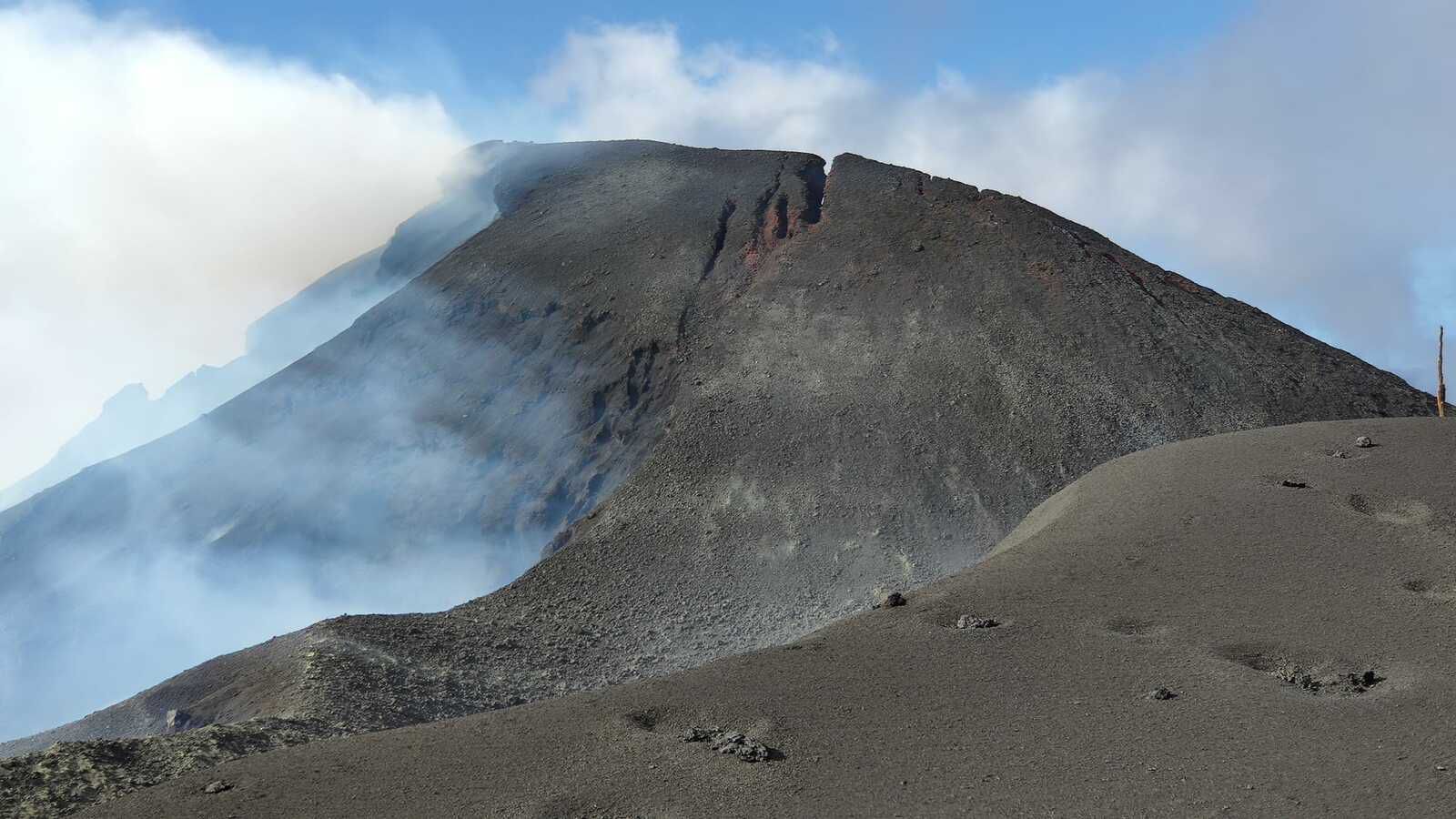 According to the latest measurements taken on December 4, 2021 between 9:40 am and 12:30 pm, the flow at Gígjukvísl is 2220 m3 / s and the electrical conductivity is now measured at 550µS / cm. These measurements are in line with the flow forecasts that have been made and the flood is expected to peak again tomorrow Sunday. If there are major changes in the development of the Grímsvötn flow, this will affect when the flood peak is reached. Hlaupórói continues to grow on Grímsfjall and neighboring stations and several earthquakes have been detected in the area, some of them probably originated in the ice above the lakes, or where water flows. The area is closely watched.

Flow measurements show that the maximum flow from Grímsvötn was on December 5 by noon and since then the flow to Gígjukvísl has decreased somewhat.

A magnitude 3 earthquake rocked Grímsvötn around 6 a.m. this morning. The earthquake originated about a kilometer and a half northeast of Grímsfjall at a depth of about 100 meters.
Bjarki Kaldalón Friis, nature conservation expert at the Meteorological Office, says it's hard to say whether the earthquake is related to the ice cave subsidence. There are no signs of rashes so far. Several smaller earthquakes were detected after and just before the larger one.