After the first announcements of the eruption around 8:30 p.m. UTC on December 19, of the eruption of the Hunga Tonga-Hunga Ha'apai volcano, shorthand HTHH, in the Tonga Islands, the details are starting to fall.

Satellite imagery indicated an ashless steam plume; it appears that the eruption is continuing on December 21.

A view of the eruption by the Korean weather satellite GeoKompsat on December 19, transmitted by Simon Proud, shows an impressive plume of ash and gas, which rose up to 16 km asl, according to the chief geologist of Tonga , Taaniela Kula. This plume is crossed by lightning on the satellite images.

The eruption was so loud and violent that it was heard by several people in Vava'u, 261 km northeast of the volcano.

Small pumice rafts of just under 50 km² (after 24 hours) are visible in a MODIS / Nasa Worldview image from December 21. The approximately 150-meter-high volcanic island, referred to as Hunga Tonga-Hunga Ha'apai (HTHH), was formed by hydro-volcanic eruption processes leading to the construction of a classic tephra cone volcano with pyroclastic flows on the flanks. High-resolution satellite imagery began immediately after the construction phase was completed using the DigitalGlobe WorldView system, and shortly thereafter with the Radarsat-2 C-band Synthetic Aperture Radar (SAR) from the Canadian Space Agency (CSA). Digital Elevation Models (DEM) were periodically produced by the National Geospatial-Intelligence Agency (NGA) using Worldview imagery in a time series that began in May 2015. 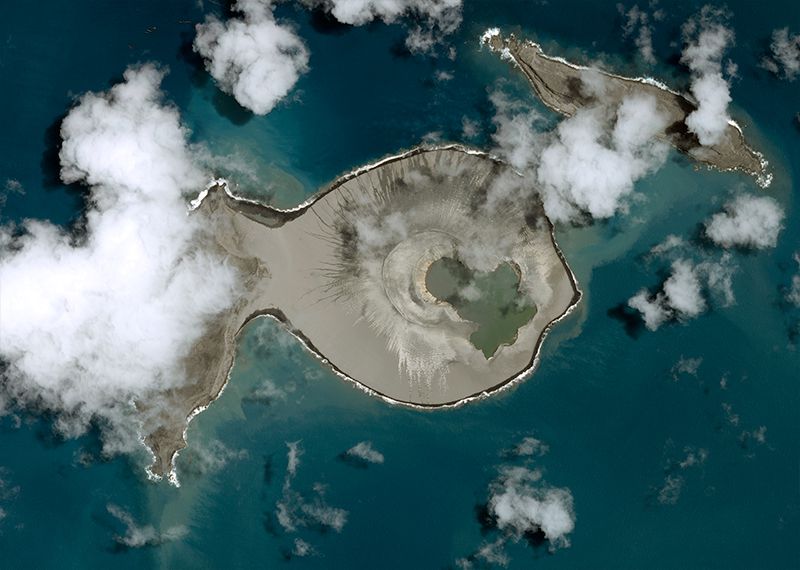 HTHH's DigitalGlobe WorldView-2 image from January 15, 2017 with the shoreline boundaries overlaid. The outline of the original island just after the volcanic construction was completed in January 2015 is shown in yellow. The red outline is the geometry of the shoreline as of early 2016. The development of accreted sandy isthmus regions northeast and west of the new island core is apparent. Courtesy of NGA. / apogeospatial - one click to enlarge

The eruption of Cumbre Vieja continues its stopping process, a little slower than the previous days.

Episodes of seismicity and residual deformation (up to 6 cm in LP03) occur, which is normal, as these are intense processes that require readjustment time.

The tasks of monitoring the visible emission of volcanic gases continue, which are punctual and sporadic, concentrating in the area of ​​the eruptive centers and in the jameos of the volcanic tubes, where the incandescence is still visible, linked to the presence of washes in the cooling process. Sulfur in liquid form is noted, indicating temperatures above 190 ° C.

The magma is still stopped, except for a few residual conduits (or volcanic tube) where there was still lava flow activity yesterday, including a video with a jameo (skylight) open.

The lava deltas are already part of the new geography of La Palma and we can guess their final morphology, with the future beaches and coves that many palm trees will surely invest. Over 48 hectares of new land stretch along the coast of the Aridane Valley and have a length that exceeds 1,500 meters. 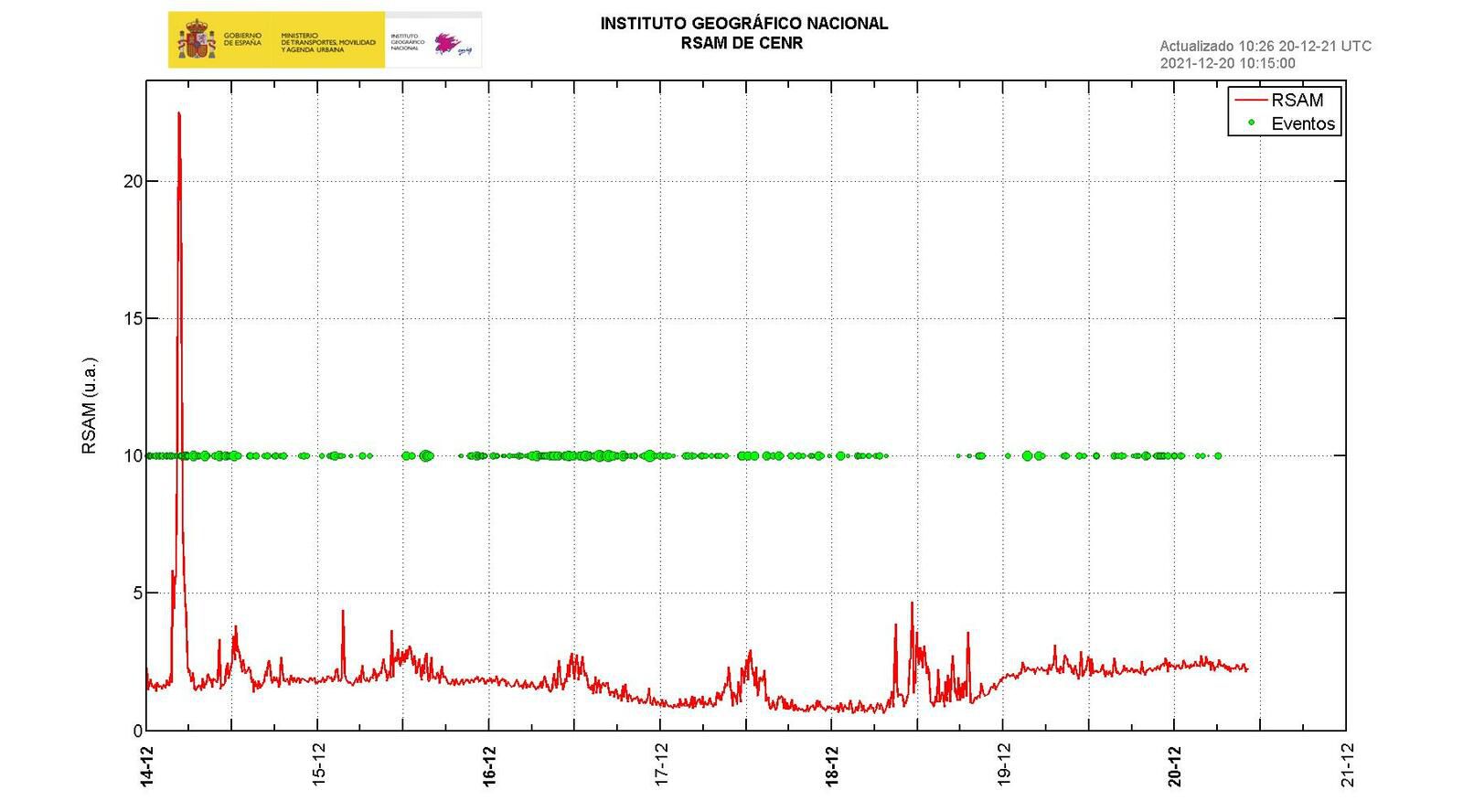 Cumbre Vieja - 12.19.2021 - Overview of the active jameos. In the flight on Sunday morning, an investigation was made into the condition of the jameos who let out the gases given off by the lava which still passes through them. Video Servicio de Trabajos Aéreos del IGME (STA) junto con el Grupo de Emergencias y Salvamento (GES) del Gobierno canario. Cumbre Vieja - fumarolic gas measurements on 20.12.2021 near the vents by InVolcan 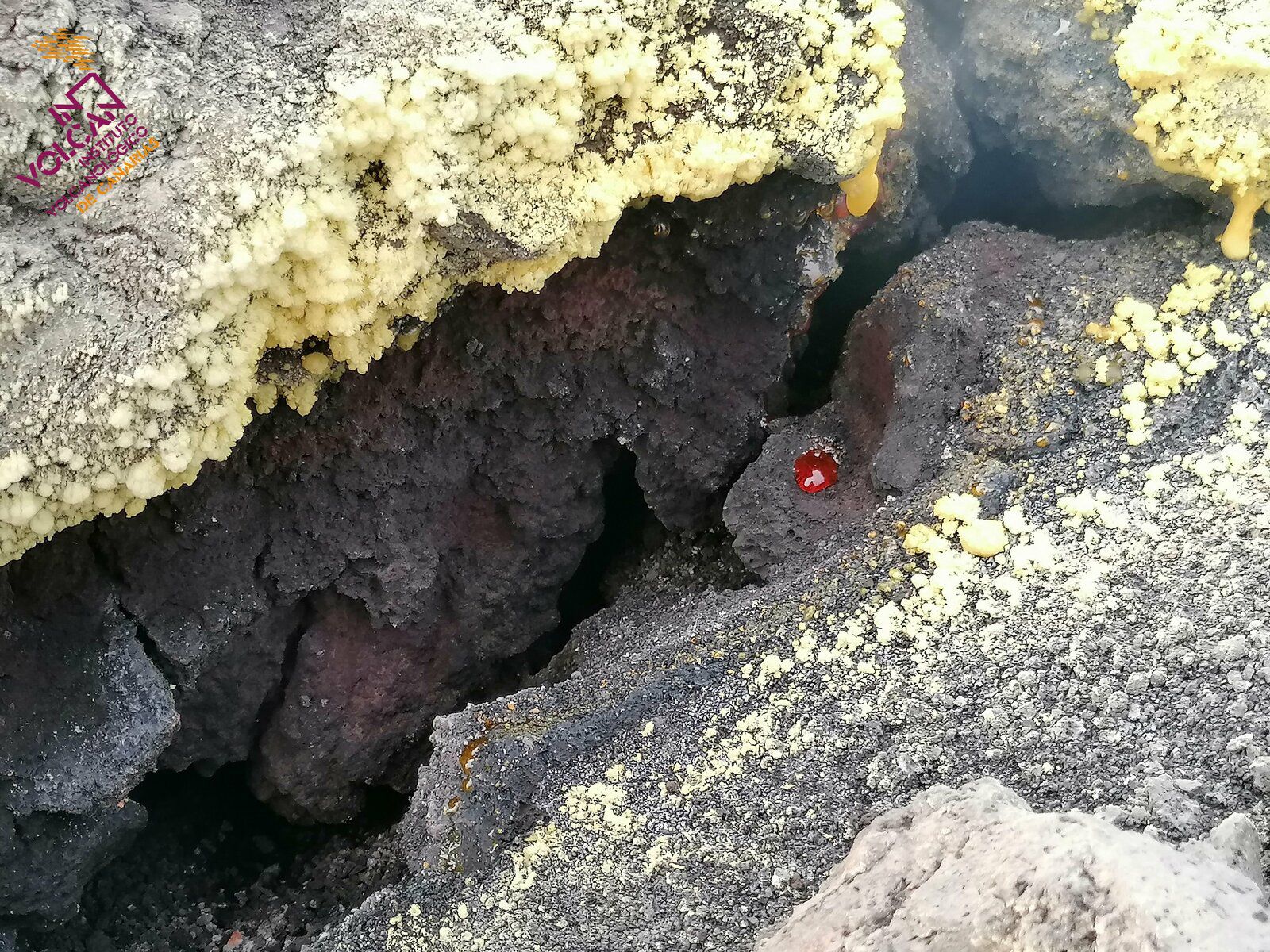 Cumbre Vieja - Drops of liquid sulfur, like drops of blood coming from the arteries of the volcano, stain certain areas of the interior of the crater - photo InVolcan 20.12.2021 The activity of the Yasur volcano, in the Vanuatu archipelago, in a state of major unrest continues with emissions of volcanic gases and ash in progress. The volcanic alert level remains at level 2.
An increase in activity was recorded yesterday, December 18, 2021 around 9:00 p.m. and was confirmed by data from observations of bombs ejected from the vent towards the cone of the volcano.

The level of risk for visitors accessing areas located in danger zone A (areas around the edge of the crater up to the parking lot) REMAINS HIGH. Areas and villages located near the volcano can continue to expect volcanic gas impacts and / or ash fall following wind directions (currently south-southeast wind directions).