Between September and November 2021, the Alaska Volcano Observatory observed a change from the long-term deformation pattern of the Okmok volcano, measured by two continuous Global Navigation Satellite System (GNSS) stations in the caldera. The deformation pattern at Okmok generally consists of almost continuous inflation, with episodes in which this movement accelerates, and is generally believed to be related to the injection of magma somewhere between 2 and 4 km (1 , 2 to 2.5 miles) below the caldera floor.

In contrast, the changes we have observed recently are consistent with an increase in pressure at a shallower depth, less than 1 km (0.6 miles) below the caldera floor. The location on the map of this new source of deformation is near cone D, just south of the young cone of tephra Ahmanilix, created in the 2008 eruption. The deformation has since returned to background levels. There was no noticeable change in seismic activity during this period, and satellite images showed no change in surface.
The recently observed deformation is consistent with a small intrusion of shallow magma, but other non-magmatic processes such as hydrothermal activity cannot be excluded. If the deformation was caused by a shallow magma intrusion, it can increase the likelihood of an eruption. Previous eruptions at Okmok have occurred with little precursor seismic activity, and AVO continues to closely monitor the volcano.

The volcanic alert is: normal, with an aviation code: green. The Vanuatu Department of Meteorology and Geohazards (VMGD) reported that vapor emissions were visible up 250m on average from Lake Voui in Ambae from December 5-7. A still image from a video taken from an airplane showed brown water surrounding an active and growing cone that ejected wet tephra less than 10m above the surface of the lake.

The alert level remained at 1 (on a scale of 0 to 5) and the public was warned to stay outside the danger zone defined as a radius of 2 km around the 2017-2018 active vents in the lake Yes and far from drainages during heavy rains.

Ambae, is a basalt massif of 2500 km³ and the largest active shield volcano in the arc of Vanuatu. Its summit area has two concentric calderas, the largest of which is 6 km in diameter and the smallest comprising three lakes (Manaro-Ngoru, Manaro-Lakwa and Manaro-Voui). A large central building is also called Manaro Voui or Lombenben volcano. Post-caldera explosive eruptions formed the summit craters about 360 years ago. A tuff cone was built in Lake Voui (or Vui) about 60 years later. The last known flank eruption, around 300 years ago, destroyed the population of the Nduindui region near the west coast. 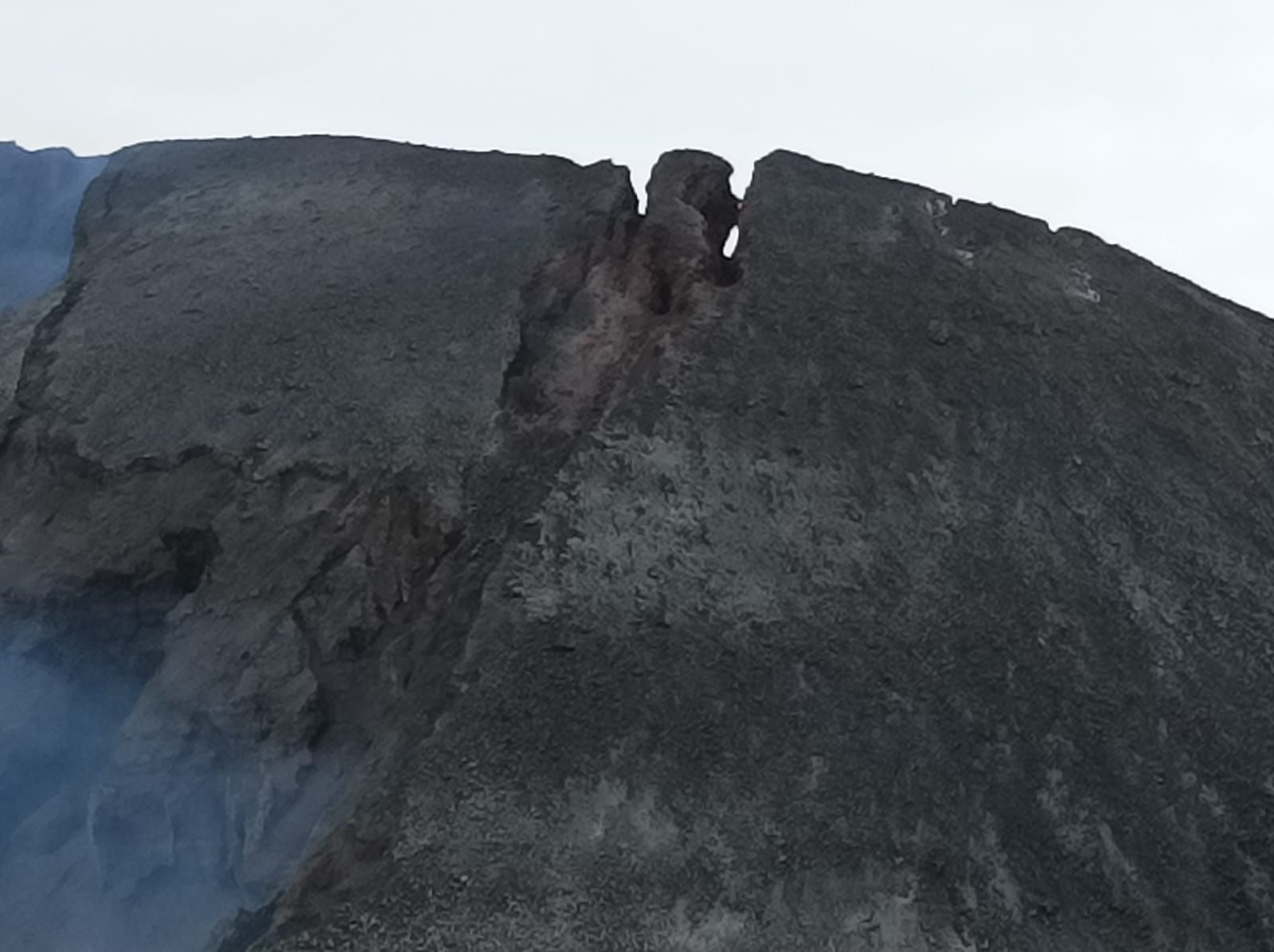 Communication from Pevolca concerning the eruption of Cumbre Vieja in La Palma:

The cracks and fractures observed in the previous days in the upper part of the secondary cone remain without significant changes or modifications. Lava flows mainly through the central sector of the flows, through pre-existing lava tubes, gaining ground in south and west directions. The affected area is estimated at 1,184 hectares.

Regarding seismicity, the values ​​remain low in the intermediate range, while the number of earthquakes at depths greater than 20 kilometers remains at very low values ​​and the tremor level is at low values ​​with little variability.

Air quality levels due to sulfur dioxide yesterday exceeded the recommended daily value at the El Paso station and the alert threshold at Los Llanos de Aridane, then fell to good levels and reasonably good. 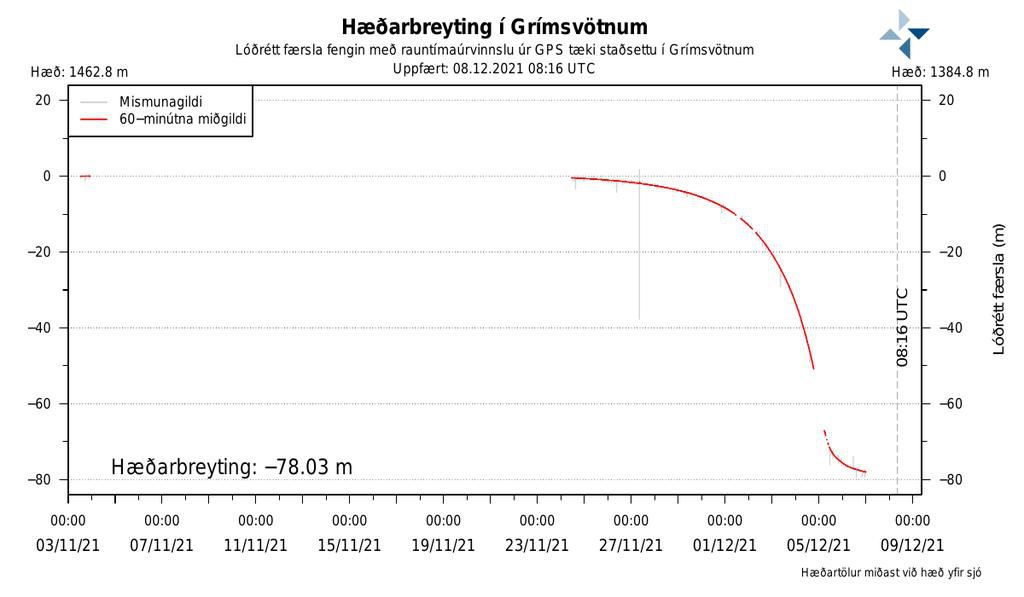 The Grimsvötn ice cap has dropped 80m! The jökulhlaup decreases rapidly, as does the seismic tremor. Seismic activity has been low since Monday's M3.6 and the aviation color code for this volcano was turned volcano back to yellow on December 7, in line with the decreased likelihood of an eruption.

Scientists will continue to monitor the area closely although there is currently no indication of an impending eruption in Grísmvötn. A swarm of earthquakes began on December 7, 2021 about 400 km off the Oregon coast. The swarm occurred along the Blanco Fracture Zone, a right lateral transform fault zone marking the boundary between the Pacific Plate to the southwest and the Juan de Fuca Plate to the northeast. During the first 12 hours of the swarm, the USGS recorded 37 earthquakes of M3.4 or greater, including nine earthquakes of M5 or greater. In this time range, the two largest earthquakes in the swarm were M5.8. There have been sparse reports of light tremors associated with these earthquakes along the Pacific Northwest coast.

Considering the moment tensors and the orientation of the fracture zone, these events probably occurred on a steeply dipping fault, right lateral and oriented southeast. At this location, the Juan de Fuca Plate slides past the Pacific Plate at a speed of 49 mm / year along an azimuth of 110 degrees from the north. The Juan de Fuca Plate eventually sinks beneath North America along the Cascadia Subduction Zone about 360 km (220 miles) east of this swarm; therefore, this earthquake did not occur over the subduction zone, but rather is the result of interactions between the Pacific-Juan de Fuca plates further west.