Ambrym Volcano, in Vanuatu, has gone from a state of minor unrest to a state of major unrest. The Volcanic Alert Level has been raised from Level 1 to Level 2.
New scientific analyzes suggest that the activity of the Ambrym volcano has increased considerably today January 25, 2022 early in the morning around 4 am. Steam has been observed over Marum Crater and a significant amount of steam, ash and gas has been observed over Benbow since 05:15 this morning. Volcanic hazards remain in the area of ​​the summit craters and in the southeastern part of Ambrym Island (eg major fissures in 2018). The quantities of sulfur dioxide emitted can generate acid rain and affect the populations of the east of the island. Volcanic hazards are always present on Ambrym, specifically at the top and in the eastern part of the island. These are related to the presence of cracked areas. In addition to the summit hazards, the presence of faults and active faults (major ground cracking) in the southeast area of ​​Ambrym is also hazardous, they will continue to be eroded and affected by seismic activity. The danger zone for life safety in the summit area remains limited within the permanent exclusion zone at Benbow and danger zone A at Marum (see Ambrym caldera safety map below). These danger zones are approximately 1 km around the Benbow and 2 km around the Marum craters including Maben-Mbwelesu, Niri-Mbwelesu and Mbwelesu. An additional danger zone southeast of Ambrym remains within 500 meters of major fissures.

The latest observations and daily analysis of seismic data from Ambrym from the volcano monitoring system confirm that the activity of the Ambrym volcano continues at the level of major unrest. The lava lakes that appeared in Benbow and Marum craters have disappeared since the December 2018 eruption. The remaining activity inside the active craters is continuous steaming. Residents of Ambrym and neighboring islands will not see the volcanic glow at night. With this current volcanic activity, it's a helpful reminder that eruptions can occur at any level of unrest with little or no warning. This Tuesday, January 25, 2022 at 11:40 a.m. Costa Rican time, an explosion is recorded in the Rincón de la Vieja volcano, which generated the partial flow of the acid lake on the northern flank.
On 2022-01-25 at 11:39 local time, an eruptive column rises 800 meters above the height of the crater and 2716 meters above sea level. (meters above sea level Wed).
Duration of the activity: 1 minute.
Neighbors share these photos from the event.
Caution is required on the bridges and ravines of the Pénjamo, Azul and Azufrada rivers because this explosion will form acidic and hot lahars in the next few minutes. After several days of intermittent minor activity confined to a small pond north of the western vent cone of Kilauea's Halema'uma'u Crater, At 5:52 a.m. this morning, activity restarted rigorously with a lava flow from the western vent cone that flowed west and north along the crater margin. At 6:30 a.m. HST the lava lake began to rise and by 8:20 a.m. HST had risen 11 meters to a total depth of 84 meters from when the lava emerged on September 29, 2021.

All recent lava activity has been confined to the crater, and there is no indication of activity migrating elsewhere on Kīlauea.

At midnight, summit tiltmeters recorded inflation, which continued until about 6 a.m. HST this morning; since then the incline has been flat and stable. The volcanic tremor associated with the eruption - as recorded by nearby seismometers - was barely above pre-eruption background values ​​until about 4:10 a.m. this morning when it began to rise. 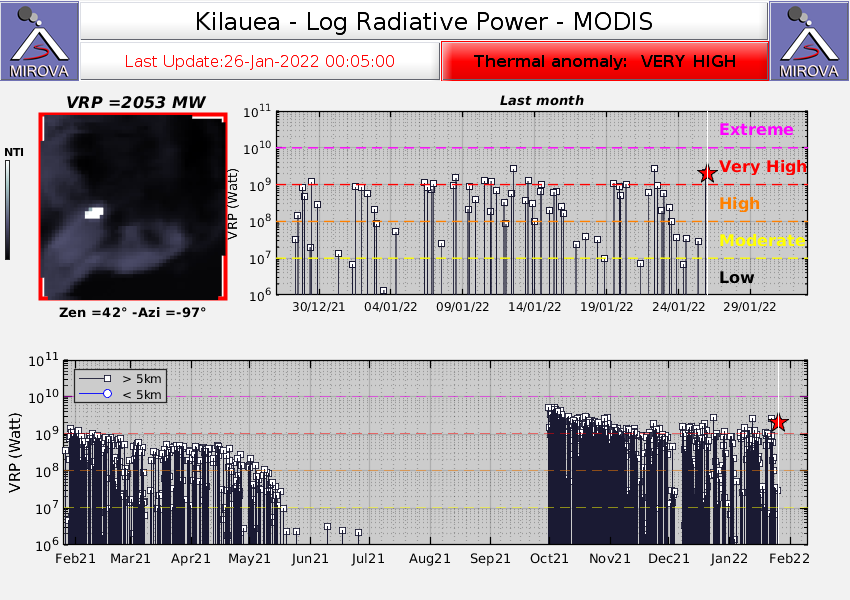 In Suwanosejima, in the Ryukyu archipelago, the explosive activity continues, with this January 25, 2022 at 6:17 p.m. local time an explosion, accompanied by a plume of ash at 1,200 m. or more above the Mitake crater. The dispersion of the ashes was made towards the south.