Activity of Etna, Sangay and Wolf. The INGV-OE, reports that from 00:15 GMT this January 30, 2022, we observe the resumption of a modest and sporadic explosive activity at the southeast crater of Etna, the activity produces weak ash emissions brown (old materials) that disperse quickly in the summit region. According to reports from SNGRE, a slight fall of ash has been confirmed in Macas, in the province of Morona Santiago.
According to the simulation of the ash cloud and the direction of the winds, this phenomenon could continue and generate ash falls in the province of Morona Santiago. This phenomenon has been recurrent throughout the current eruptive period of Sangay.
It is recommended to take appropriate measures and receive information from official sources.

Between January 29 and 30 at 11 a.m., seismicity is characterized by 122 explosion earthquakes, 10 LP earthquakes and 70 episodes of emission tremor.

The level of activity remains high, without changes. In the Galapagos, the Washington VAAC did not record observed satellite emissions at Wolf Volcano.
WORLDVIEW applications recorded 18 thermal anomalies and MIROVA recorded 1 high thermal anomaly (672 MW), and three smaller ones on January 30 in the past 24 hours. 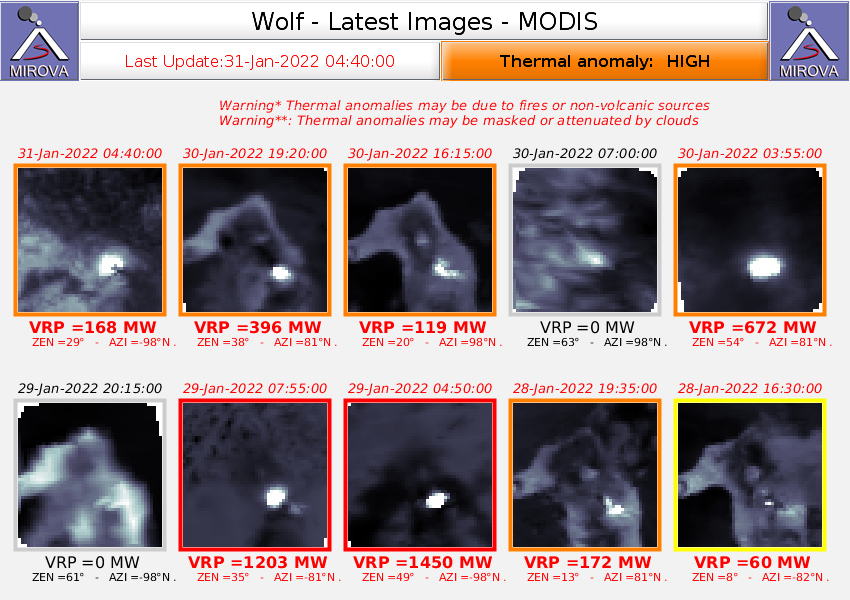