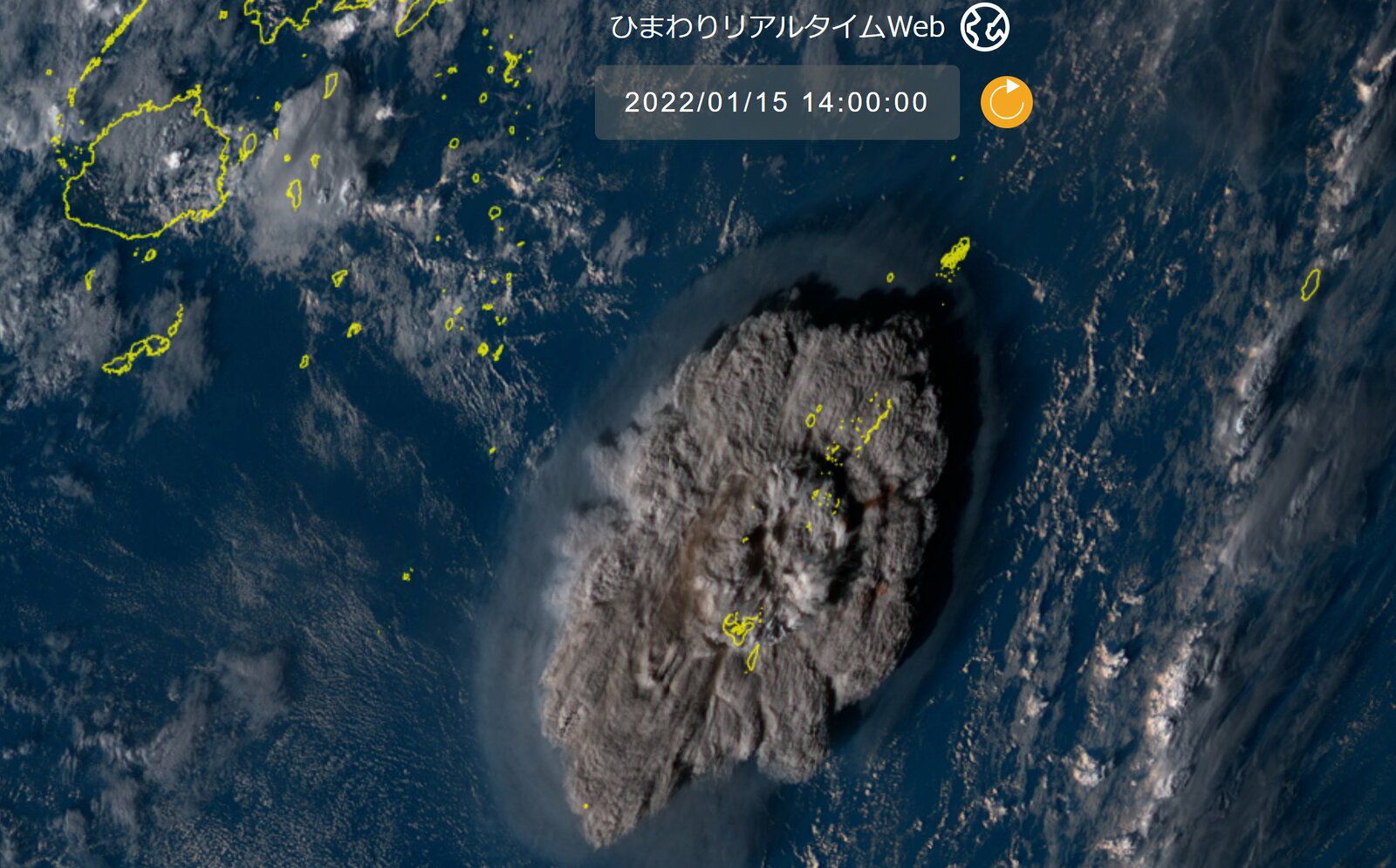 Observations from satellite images captured of the eruption at Hunga Tonga- Hunga Ha'apai between 5:00 a.m. on 01/15/2022 and 12:40 p.m. on 01/15/2022 are as follows:
The volcanic eruption is continuing, with ash emitted and detected at 7:20 a.m. this morning. This ash plume was due to an eruption that lasted 10-15 minutes and was drifting downwind to the east of Hunga.

All domestic flights in Tonga have been canceled for today, Saturday, due to the active volcano, located 65 km north of the capital.

No other eruption has been detected since then.

TGS reported this morning that observations from satellite images between 5:10 p.m. and 11:30 p.m. had shown the eruption to be ongoing, with a sustained 5 km-wide plume of ash, steam and gas rising to an altitude of 18 to 20 km above sea level.

The plume extended radially out to a radius of 240 km from the volcano, passing over the Tongatapu, 'Eua, Ha'apai and Vava'u groups. At 10:30 p.m., the plume had descended to an altitude of 18 km above sea level. Coastal water turbulence caused by the eruption is expected to have ceased for all shores of Ha'apai and Tongatapu islands. The public is advised to watch the currents before entering the water.

At 10:00 a.m. this Saturday morning, the National Tsunami Warning Center canceled the marine tsunami warning for Tongatapu, Ha'apai and southern Tonga. Based on observation data recorded by the Nuku'alofa tide gauge, he said the sea level condition has returned to normal. The sea level fluctuation recorded in the Nuku'alofa tide gauge was less than 10 cm for the past six hours (until 10 a.m. Saturday).

Apart from Tonga, the impact of the tsunami has been confirmed in Fiji (Vanualevu) which is now under an official tsunami warning. The NWS Pacific Tsunami Warning Center has issued a warning to American Samoa, saying sightings are higher than forecast.

The trans-Pacific tsunami warning is maintained.

Owners of rainwater harvesting systems throughout Tonga are advised to check your roofs for ash fall before reconnecting your gutter systems. Please clean up if ash fallout is evident.
For resident locations where the acrid smell of sulfur or ammonia is felt, use breathing masks if helpful. The eruption of the Semisopochnoi volcano continues. Small explosions producing low-level ash clouds from the northern crater of Mount Cerberus on Semisopochnoi Island have occurred intermittently throughout the past week.

These explosions were detected by local seismic and infrasound sensors. When weather conditions permitted, small ash emissions were observed in web camera images. For most of the week, these low-level broadcasts could not be seen on satellite views.

However, an ash plume drifting south could be seen by satellite on Thursday January 13 at an altitude of around 1,500 meters above sea level. (picture above)

Small explosions that produce minor ash deposits near the active north crater of Mount Cerberus, and ash clouds generally less than 3,000 meters above sea level have characterized recent activity and show no signs of slowing down.

The Semisopochnoi is monitored by local seismic and infrasound sensors, satellite data, web cameras, and remote infrasound and lightning networks. The eruption of Piton de La Fournaise, which began on 12/22/2021 around 3:30 a.m. local time, continues. Over the last 24 hours, the amplitude of the tremor has been decreasing for about thirty hours. 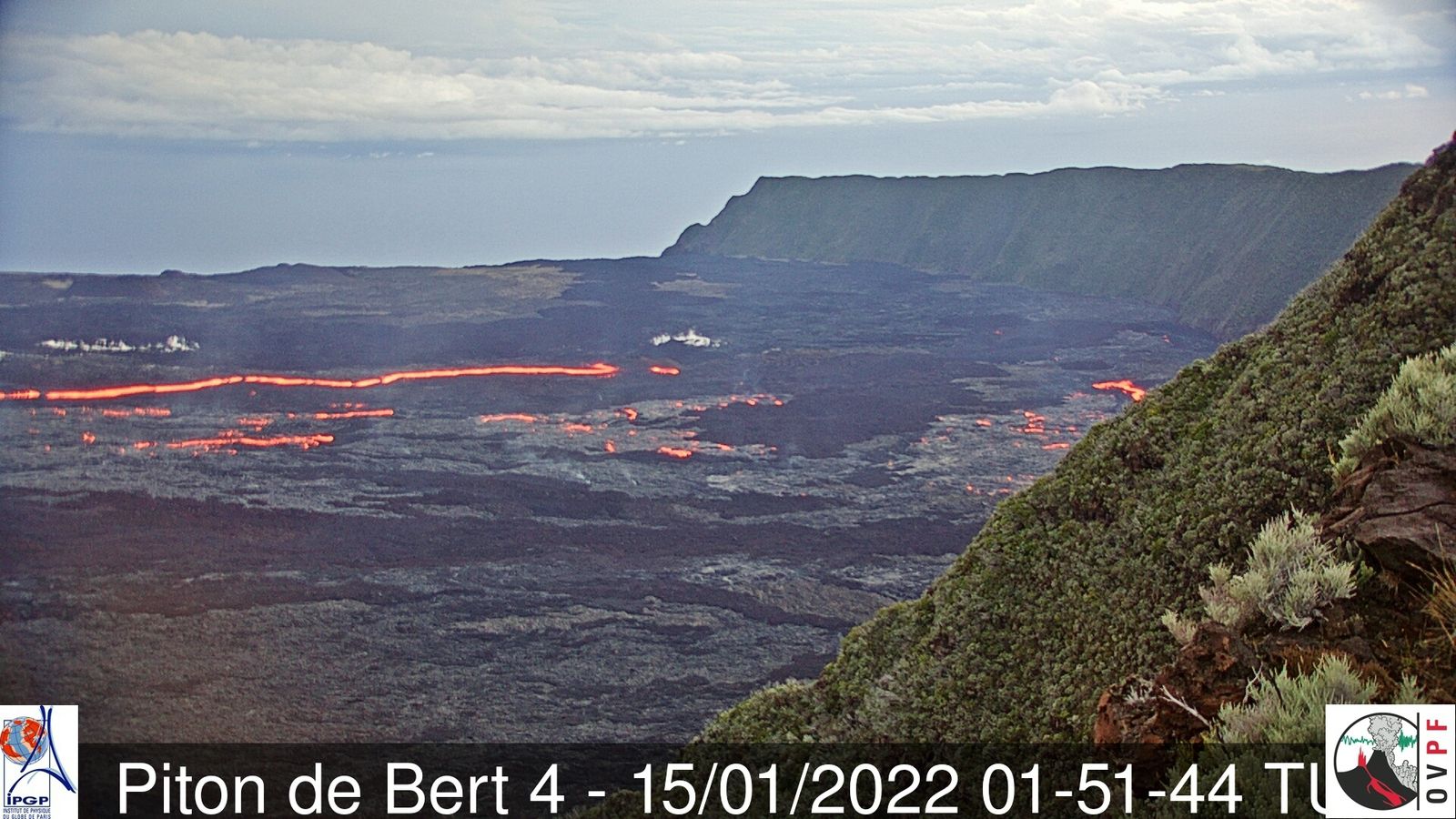 The observations made show that the lava projections at the level of the cone above the cone have almost disappeared (we can however see the traces). In addition, no overflow from the lava lake has been reported in the past 24 hours.

- The surface deformations always show a deflation at the level of the summit zone, linked to the emptying of the magma reservoir located under the summit (at about 2-2.5 km depth) feeding the eruptive site.

- Due to temporary improvements in meteorological conditions at the eruptive site, a series of lava flow estimates have been made over the past 24 hours by satellite method with the HOTVOLC platform (OPGC - Clermont Auvergne University). The flows could be estimated between 3 and 68 m3 /s. The dispersion of these measurements as well as the very high measured value (68 m3/s) do not reflect the real flow of lava and must be attributed to the method used (die from the IR radiation of the flow which increases when the liquid lava reappears on the surface of the lava field) as well as the events observed yesterday: emptying of the lava lake and a large number of associated resurgences throughout the lava field. Sangay - Visual and thermal images of the southeastern and northern flanks. The presence and location of the central and western vents are clearly observed by their thermal anomalies in B and C (red-yellow colors on the upper part of the summit), as well as the lava flow emplaced in this ravine (reddish anomaly elongated). On the other hand, in E we observe the anomaly corresponding to the lava flow located in the northern ravine. - Doctor. IGEPN / 14.01.2022 - - one click to enlarge

Thanks to the coordination of the National Risk and Emergency Management Service (SNGRE) and the logistical support of the Aeronautical Group of the Army N ° 45 PICHINCHA, technicians from the IG-EPN, carried out overflights at the volcano Sangay on Monday, December 27, 2021 from the city of Macas, province of Morona Santiago in order to carry out visual, thermal and gaseous monitoring works, as well as the technical maintenance of the multiparametric monitoring station (SAGA).

Thanks to the preliminary analysis of the thermal images, it was possible to measure maximum apparent temperatures (TMA) of up to 645°C, determined at the level of the central vent; The western and northern vents had values ​​of 410 and 515°C respectively.

Additionally, active lava flows emplaced in the southeast and north gullies have been observed to reach lengths of 540 and 370 m, respectively, and have TMAs of 580 and 450°C.

The eruptive activity of Sangay in recent years has profoundly changed its morphology. The changes observed have been present mainly on the summit, the southeastern flank, and currently also on the northern flank.

At the time of publication of this report on January 14, 2022, the activity levels of the Sangay volcano are considered to be :

- high with an upward trend internally, and

- high with an upward trend in superficial.