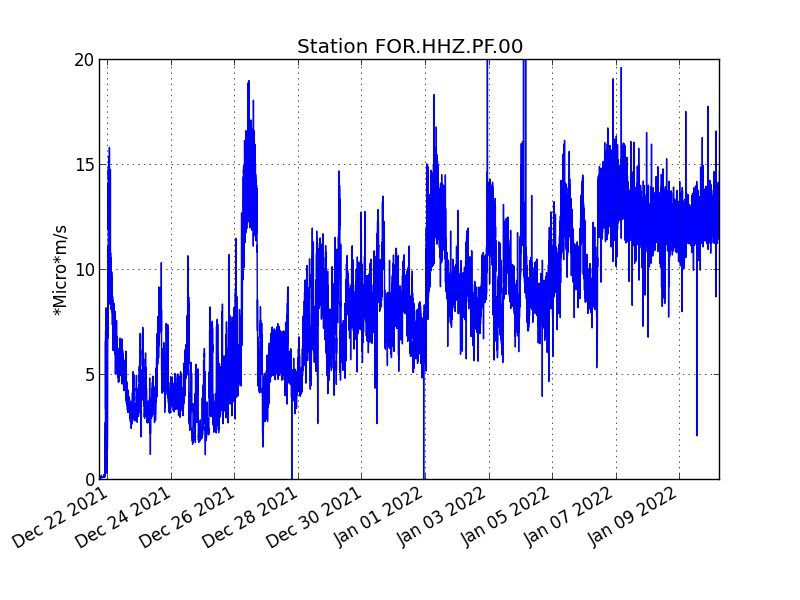 The eruption that began on December 22, 2021 at around 3:30 a.m. local time at Piton de La Fournaise continues. Over the last 48 hours, the amplitude of the tremor has been relatively stable. Fluctuations in the amplitude of the tremor can still occur; they are partly linked to the level of the lava lake which varies depending on the degassing mode, and the sporadic openings of the tunnels which allow emptying of the cone.

Observations show that the lava projections at the level of the cone are still present and occasionally exceed the height of the cone. Numerous resurgences of lava flows are still visible at the roof of the lava tunnel downstream of the cone. 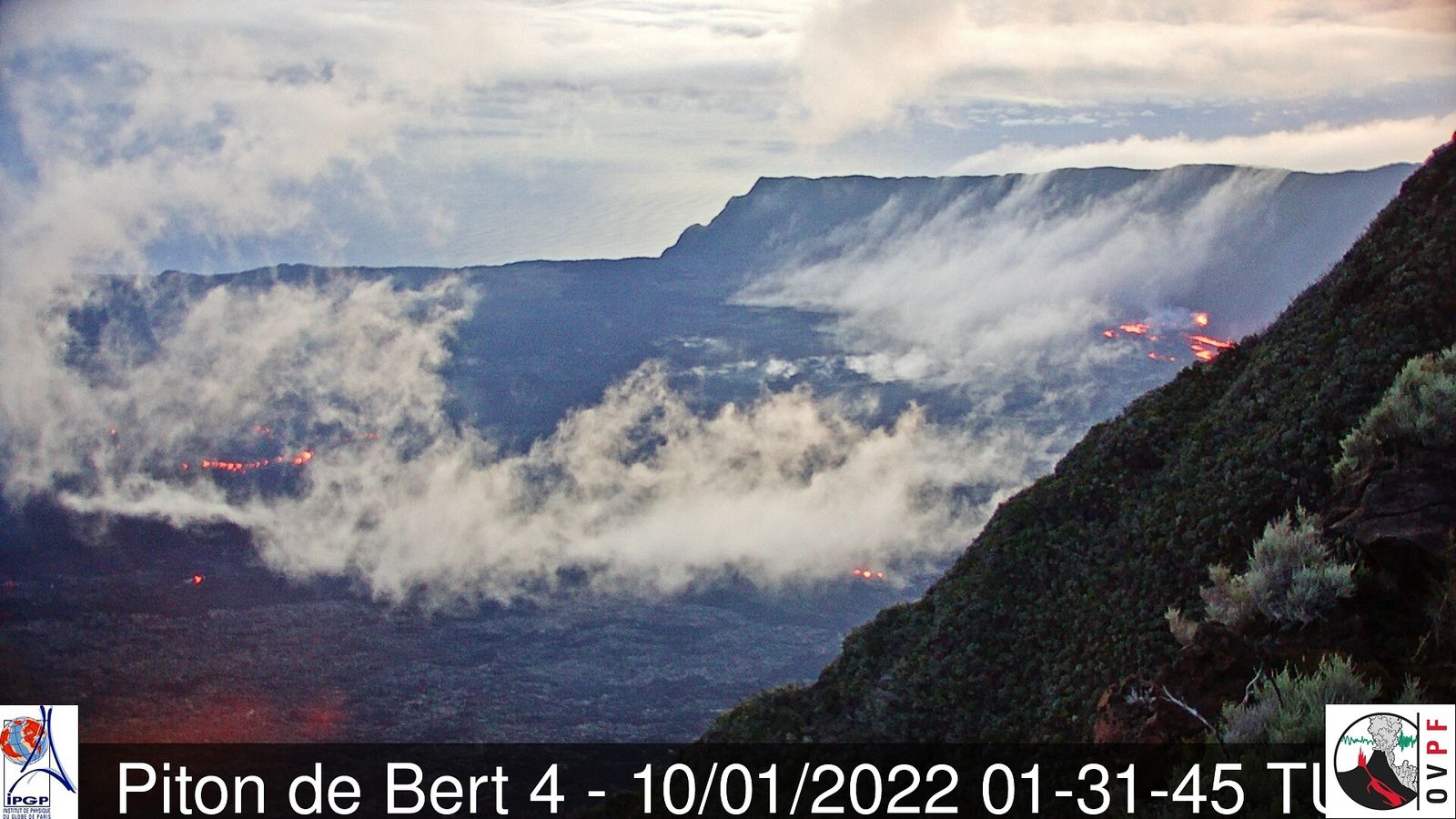 The images from the OVPF-IPGP-IRT webcam located at Piton de Bert show that a new lava flow tongue has taken place over the past 24 hours and runs along the southern rampart. Hikers early this morning reported the presence of smoke at the foot of the southern rampart, certainly linked to the outbreak of fire in the heavily vegetated rampart. According to the images, the front of this lava tongue is around 1800 m above sea level.

- Six volcano-tectonic earthquakes of low magnitudes (<0.5) were recorded under the summit.

- The surface deformations still show a deflation at the level of the summit zone, linked to the emptying of the magma reservoir located under the summit (at about 2-2.5 km deep) feeding the eruptive site.

- Lava flows could be estimated by satellite method with the HOTVOLC platform (OPGC - Clermont Auvergne University). They were between 3 and 20 m3 / sec. These variations are explained by the method, which relies on the infrared radiation of the flow, the perception of which by satellites can be largely influenced by the weather conditions above the flows as well as the surface conditions of the flows. The particularly bad weather conditions on the eruptive site over the past 24 hours have only allowed the acquisition of five measurements (the acquisitions being made every 15 minutes). GOES-16 satellite images show the gas emission column from the eruption of Wolf volcano in the Galapagos, looking southwest. The Washington VAAC reported four alerts, mostly for gas, with heights up to 700 meters above sea level and heading southwest.

GOES 16 satellite images at 11:20 UTC (TL GALÁPAGOS: UTC-6) show that the thermal anomaly associated with the lava flows has slightly altered its course from SSE to E. The lava flows continue to move towards the sea , situation on January 9, 2022/11 a.m.
The WORLDVIEW satellite system has reported hundreds of thermal alerts to Wolf during the past 12 hours. Likewise, the MIROVA system reported 1 very high thermal anomaly (2756
MW), 1 high (572 MW) and 1 moderate in the last 24 hours.
Seismicity is characterized by 12 VT earthquakes, 2 hybrid earthquakes and an emission tremor period. The growth of the lava dome continues at Sheveluch, accompanied by strong fumarole activity, and incandescence of the lava dome and hot avalanches -. KVERT satellite data shows strong gas-vapor activity from the volcano. A gas-vapor plume containing a certain quantity of ash extends in a cloud to 4,000 m. asl. over 140 km west-northwest of the volcano. (Time and method of ash plume / cloud height determination: 20220110 / 0240Z - Himawari-8)

The extrusive eruption of the volcano continues. The aviation color code has remained orange since January 7. Ash explosions up to 10-15km. altitude could occur at any time. Current activity could affect international and low-flying aircraft. Hunga Tonga Hunga Ha'apai - Planet satellite image 02,01,2022 (the coastline at 10,12,2021 is in yellow - the ivory lines illustrate the bathymetry carried out in 2016 by the research vessel Falkor - Doc. Tonga Geological Services. - Gov. Tonga Public notice from Tonga geological survey monitoring Hunga-Tonga-Hunga-Ha'apai (HTHH) eruption issued at 6:30 a.m. on January 10, 2022.
The observations of the satellite images captured between 6:00 a.m., Saturday January 8, 2022 and 6:00 a.m., January 10 / .2022 are as follows:
No volcanic plume was detected during this observation period. More than 6 days have passed since the last volcanic activity at Hunga-Tonga-Hunga-Ha'apai.

Volcanic activity is considered to have ceased and the volcano has returned to its normal, non-eruptive state. Monitoring will continue for 1 more day before declaring the total inactive.

There is no risk to the aviation industry at this time.
For public safety, sailors passing near the volcano are advised to stay 5 km away at all times. For your own safety, please follow the instructions on the Hunga Volcano Hazard Map.
Satellite imagery of the new island of the Hunga volcano was captured on 02.01.2021. Note the discoloration of the seas near the island shows the volume of volcanic fluids (steam, condensates loaded with chemical elements) discharged into the sea contaminating seawater. It is recommended not to consume fish from The area.