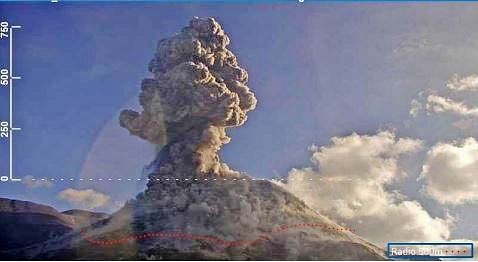 Since December 3, 2021, a significant increase in failure seismicity (VT earthquakes) has been observed in Nevados de Chillan. It continues to this day with several VT earthquakes reported to date.

Volcanic activity continues in a phase of low fluid seismic energy, but with sporadic explosive events, with a greater presence of particulate matter. The ongoing volcanic eruption on the Hunga Tonga-Hunga Ha'Apai Islands has expelled a modest amount of pumice which, over the days, has been carried around the ocean by sea currents.

Most of the pumice stone emitted during the current eruption was transported west to an area completely free of islands. Small amounts, however, also advanced south. The pumice stone that we see in the image above is the one heading south, towards Tongatapu. At the submarine volcano in the Ogasawara Islands, the Niijima # 福 徳 岡 ノ 場, which was created in August last year by the eruption of Fukutoku, has been submerged.

During an aerial observation by Asahi Shimbun on January 6, 2022, the location of Niijima was shallow and white waves marked the location; by the time the waves retreated, only a few deposits were visible. The latest observations still show lava fountain activity within the cone that has built up since the start of the eruption. Videos from OVPF-IPGP-IRT webcams show activity with lava fountains that occasionally exceed the height of the cone.

Numerous sporadic lava flow resurgences are still visible on the roof of the lava tunnel that has developed downstream from the cone.

In the early afternoon of January 6, 2022, an increase in activity at the level of the eruptive cone was observed, causing the lava lake to overflow outside the cone. It is the source of a lava flow coming along the tunnel lava field located downstream of the cone. This morning the overflow was being absorbed and the flow was starting to freeze. - A volcano-tectonic earthquake of low magnitudes (<0.5) was recorded under the summit.

- The surface deformations again show a slight deflation at the level of the summit zone, linked to the emptying of the magma reservoir located under the summit (at about 2-2.5 km deep) feeding the eruptive site.

- Lava flows could be estimated by satellite method with the HOTVOLC platform (OPGC - Clermont Auvergne University). They were between 2 and 5 m³ / sec. These variations are explained by the method, which relies on the infrared radiation of the flow, the perception of which by satellites can be greatly influenced by the weather conditions above the flows as well as the surface conditions of the flows.

In the absence of overflight, no precise assessment of the position of the flow front could be made. But given the relief with gently sloping slopes in the area, the lava field continues to extend mainly laterally and by thickening at the level of the network of lava tunnels set up on the plateau downstream of the eruptive cone. Observed from the vicinity of the vent, the flow front does not appear to have progressed significantly. La Palma - nature comes back to life after the eruption of Cumbre Vieja - photo Ruben Lopez 06.01.2022

In La Palma, after the end of the eruption of Cumbre Vieja, nature takes back its rights. In Jedey, the plants come out of their lethargy and grow back. Ferns begin to emerge from the ashes.

PEVOLCA has reduced the exclusion zone which still exists in certain areas affected by the volcanic eruption, which began on September 19, 2021 in Cumbre Vieja, and which remain evacuated, considering that they meet safe conditions for the return of their inhabitants.

The recommendations not to access underground spaces alone (garages, storage rooms, cellars, etc.) without prior gas measurement are maintained. In addition, it is first necessary to ensure that there are no bulges, deformations or cracks in the walls or ceilings.

It is also advisable to turn off all sources of ignition (smoking, turn on lights, etc.) until the building is ventilated, and to open doors and windows to ventilate, waiting 15 minutes before get inside.
In case of dizziness, shortness of breath, nausea or a lack of strength, you must quickly leave the building and call the emergency number 112.

On the other hand, for ash cleaning work, it is necessary to protect the skin (shirt, pants, gloves, non-slip shoes, head protection), the respiratory tract (FFP2 mask or higher) and the eyes (anti-slip goggles). -spatter), and water lightly to avoid raising dust. Clean only flat roofs, for the rest call on specialized services.

The recovery and redevelopment of homes will not be easy for the Palmeros. Good luck to all.