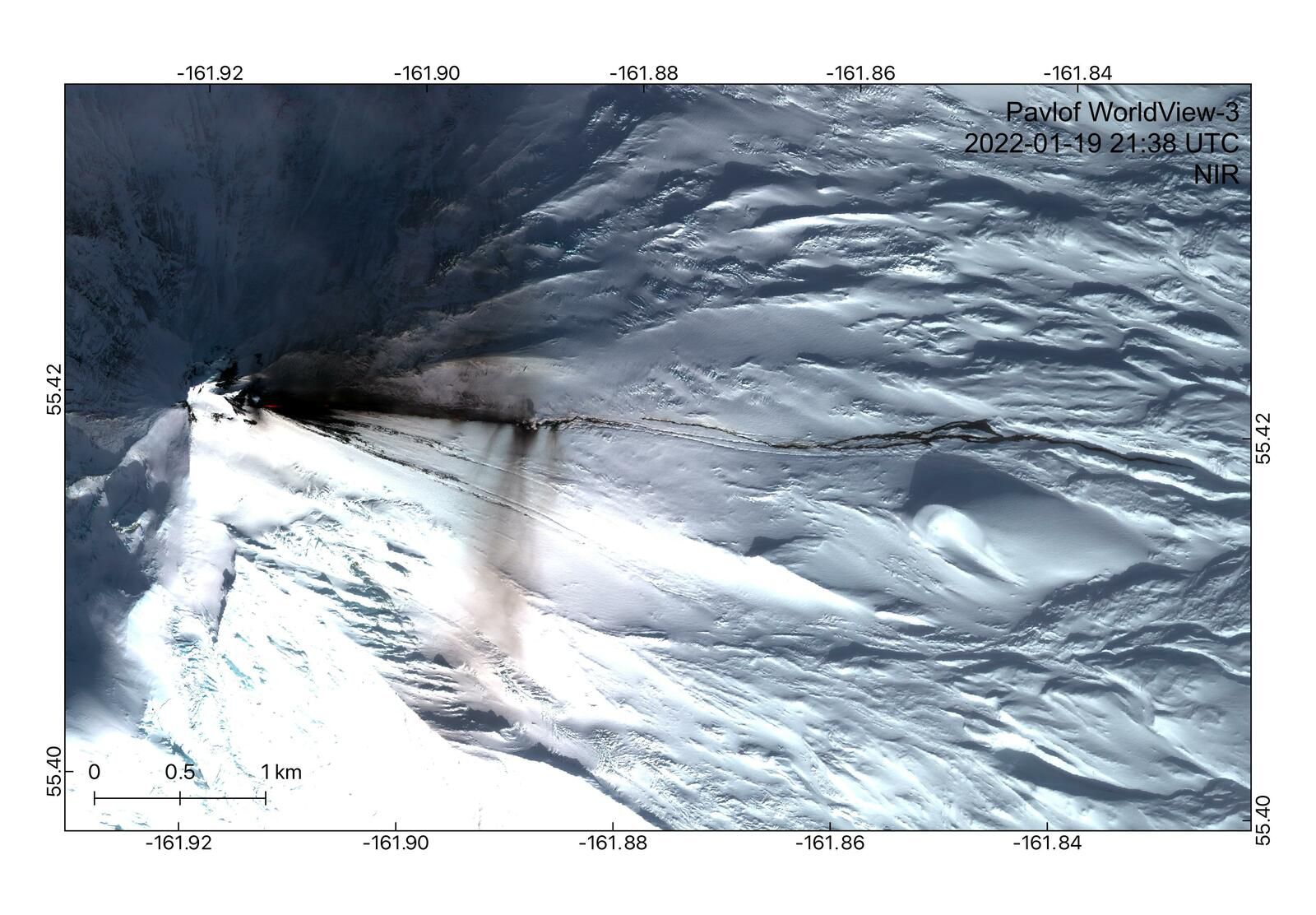 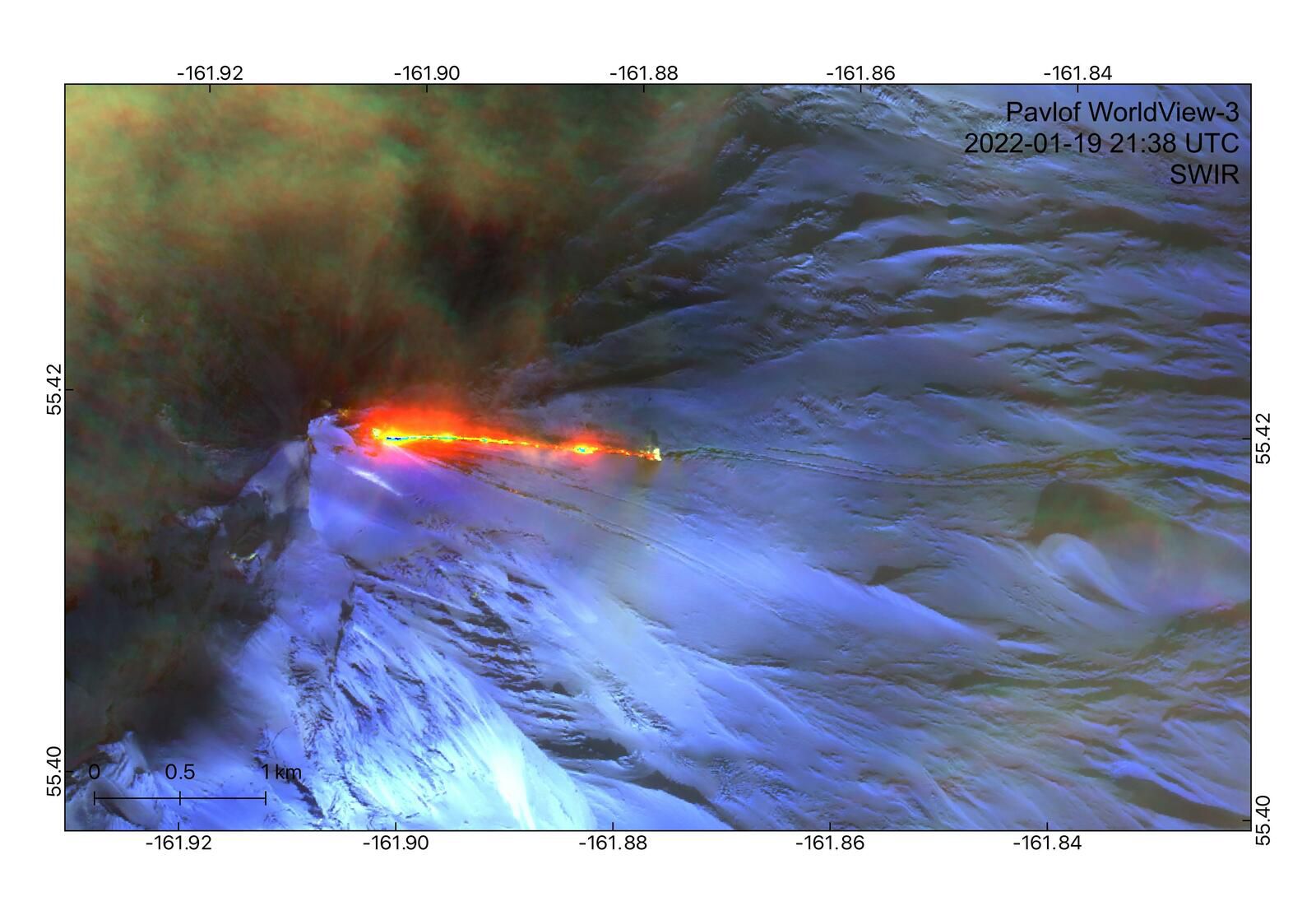 Pavlof - An active lava flow is pouring out, extending 1.3 km to the east. Meltwater from the interaction between lava and snow and ice then produces lahars that extend beyond the lava flow up to 4.4 km east of the vent. Minor ash deposits are also visible as dark streaks on the snow - worldview-3 images from 19.01.2022 / 21:38 UTC, respectively in NIR (top) and short-wave infrared false color (bottom) - Dietterich, Hannah / AVO - one click to enlarge

The eruption of the Pavlof volcano continues in the Alaskan Peninsula. Strongly elevated surface temperatures consistent with the active lava flow on the eastern flank of Pavlof were observed in satellite data throughout the week. Web camera views were mostly obscured throughout the week, but occasional clear views showed continued steaming. Clear satellite images from Wednesday January 19 showed a lava flow and lahar extending 1.3 km and 4.4 km (0.8 and 2.7 miles), respectively, east of the volcano's summit.

Periods of lava fountaining from the vent on the volcano's upper southeast flank have been occurring since mid-November 2021. This activity has built a small cone and sent flows down the flank that are melting snow and ice and produce varying amounts of meltwater. Meltwater usually incorporates loose debris on the volcano's flank and forms thin (<2 m thick) lahars. The lahar deposits extend down the east-southeast flank for several kilometres, not quite to the base of the volcano.

High seismicity, consisting of periods of sustained tremor, was detected throughout the week, and minor explosive activity was recorded by local and regional infrasound sensors on Wednesday.

Previous eruptions at Pavlof indicate that the level of unrest can change rapidly and progression to greater eruptive activity can occur with little or no warning.

The Pavlof is monitored by local seismic and infrasound sensors, satellite data, web cameras, and remote infrasound and lightning networks. In the Galapagos, the level of surface and internal activity of the Wolf volcano remains high, but decreasing.
Only two long-period earthquakes are mentioned in the last 24 hours.
There is no observation of gas emissions in the satellite images.
MIROVA reported thermal anomalies for this January 21, between 122 and 5729 MW, and FIRMS recorded hundreds of thermal alerts in 24 hours, observed due to advancing lava flows. At 10:27:00 p.m. local time on January 20, 2022 (rectified), an eruption is detected by infrasound and seismic signal at the level of the Rincon de la Vieja volcano, the height reached by the column is unknown due to the visibility conditions of the site .

After the eruption, no significant tremor is detected. No significant deformation is observed either.
Duration of the activity: 2 minutes.
Seismic activity is similar, compared to yesterday.
Wind direction is unknown at this time. Merapi activity report from January 14 to 20, 2022:
This week, a pyroclastic flow was observed in the southwest, upstream of the Bebeng River with a maximum slip distance of 2,000 m.

Seismicity this week is still quite high. Mount Merapi's deformation, which was monitored using EDM this week, showed a distance shortening rate of 0.2 cm/day.
The activity level remained at 3 / siaga.
The current potential danger consists of avalanches of lava and hot clouds in the south-east-south-west sector for a maximum of 3 km to the Woro river and 5 km to the Gendol, Kuning, Boyong rivers , Bedog, Krasak, Bebeng and Putih. Meanwhile, the ejection of volcanic material in the event of an explosive eruption can reach a radius of 3 km from the summit. 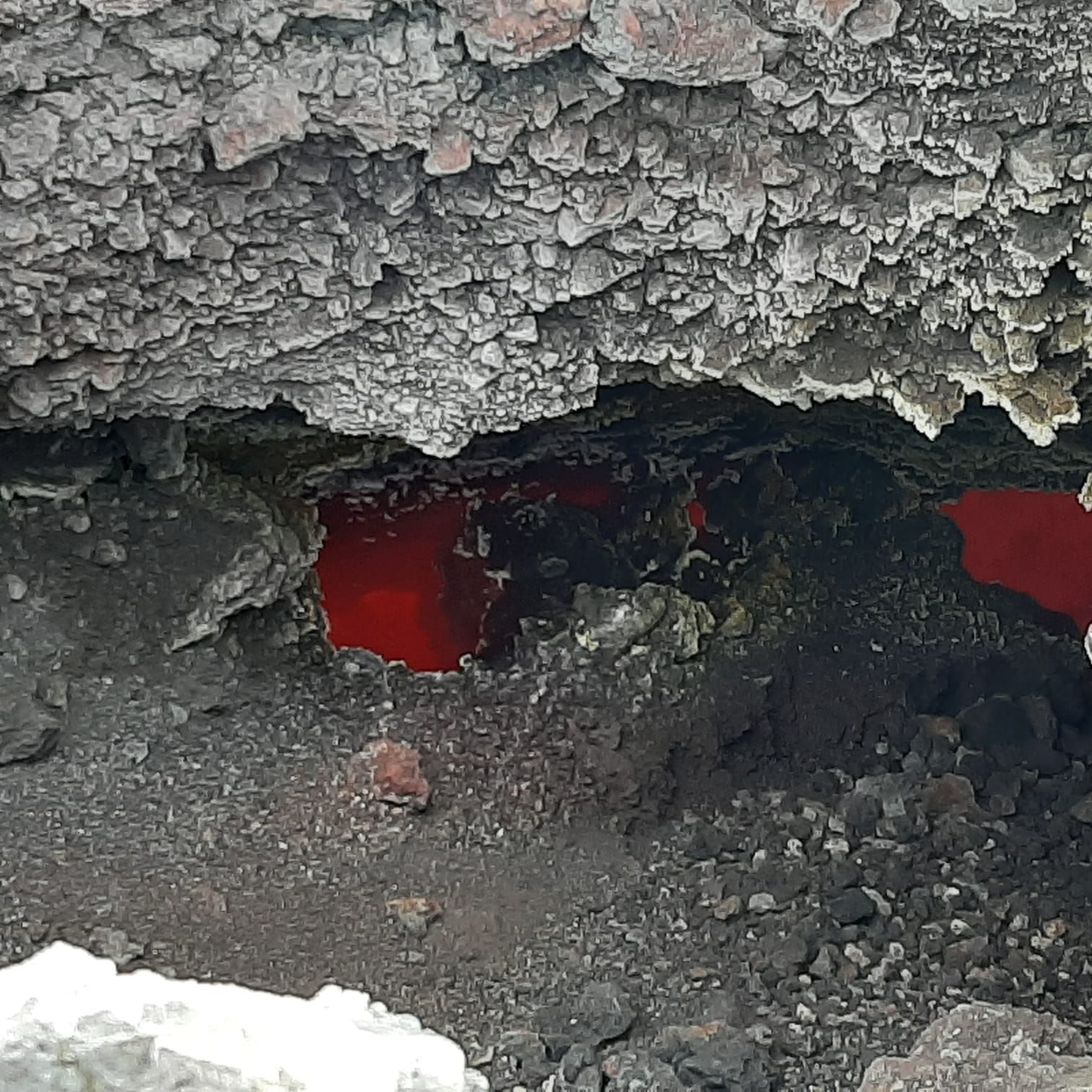 Cumbre Vieja - temperature and gas flow measurements by IGN - more than 400°C in the crater (photo Maria J.Blanco) - one click to enlarge

On January 21, 2022, measurements were made by teams from IGN, Involcan, assisted by INGV at the craters of Cumbre Vieja, La Palma.

Measurements of temperature and CO2 flow to control the remaining activity were carried out by the IGN. According to Maria José Blanco, 400°C are exceeded on the surface, where incandescence is still visible in the crater.

La Palma Cumbre Vieja - the outcrop has a thickness of more than 2 m, composed of alternating ash, lapilli and slag - photo Involcan & INGV