Minister Gustavo Manrique flew over the area of ​​the Wolf volcano in Isabela island, confirming that the eruptive activity continues. The lava flows are located less than five kilometers from the coast, towards the east side of the island.
"The direction taken by the lava flows and the general development of the eruption allows us to stress that the pink iguana population remains out of danger," Minister Manrique said.

Thermal anomalies continued to indicate the advance of the lava from January 8 to 12. Plumes composed mainly of gas reached an altitude of 1.3 km. and drifted west and southwest.

Photos released on January 11 by the Parque Nacional Galápagos showed a lava fountain at a growing cone and fluid lava flows jutting out from the base of the cone. The magma has traveled approximately 15 kilometers since the start of the activity, it has moved through ancient lava fields from previous eruptions and over vegetation in the arid zone of the Galapagos, where the rosewood forests , chala, romerillo and other species of the predominant and endemic native flora. Little impact on the fauna, which remains located north of the volcano, where historically there has been less volcanic activity.

According to the preliminary map of the eruption, based on satellite images from Planet Scope and Sentinel-2, the lava flow (s) covered an area of ​​approximately 7.6 km². The estimated maximum range of lava flows is 16.5 km from the highest vent
(blue triangle: possibly inactive) and 15 km from the active crack (purple triangle). The eruption that began on 12/22/2021 at around 3:30 a.m. local time at Piton de La Fournaise continues. Over the last 72 hours, the amplitude of the tremor has increased. 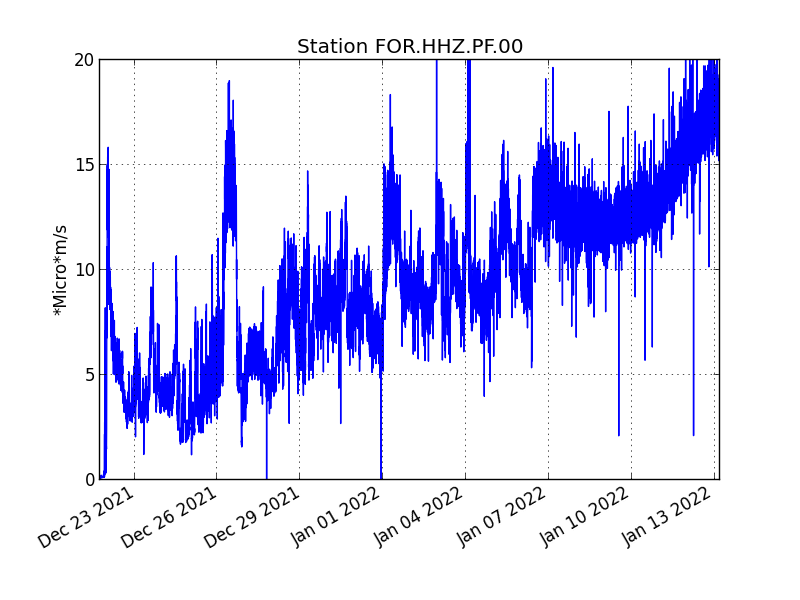 As in most of Reunion, bad weather conditions persist on the eruptive site. However, some observations could be made thanks to short clearings. These show that the lava projections at the level of the cone are still present and occasionally exceed the height of the cone. Regularly overflows of the lava lake are observed as well as numerous resurgences of lava flows at the roof of the lava tunnel downstream of the cone.

The front of the last flow arm put in place reached the southern rampart of the Enclosure Fouqué several days ago and is progressing very slowly given the relatively low slopes in the area. - Twelve volcano-tectonic earthquakes, of low magnitude (<1.5), were recorded under the summit.

- The surface deformations still show a deflation at the level of the summit zone, linked to the emptying of the magma reservoir located under the summit (at about 2-2.5 km deep) feeding the eruptive site.

- Due to very bad weather conditions, extremely few estimates of lava flow by satellite method with the HOTVOLC platform (OPGC - Clermont Auvergne University) could not be made. At around 8:00 p.m. (local time) last night, the flow was estimated at 4 m3 / s. A Sentinel-2 satellite image shows a rarely clear view of the crater with near IR incandescence.

These data need to be supplemented by in situ observation. 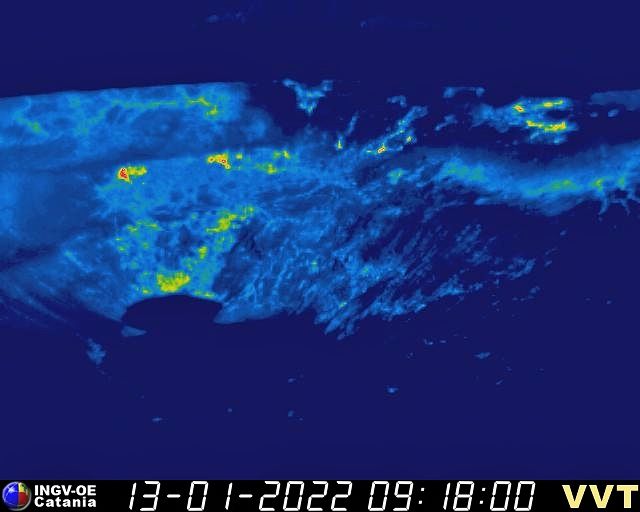 In the Aeolians, at Vulcano, the temperature values ​​are stable both on the edge of the crater of La Fossa and on its internal face.
The analysis of the CO2 fluxes at the base of the La Fossa cone and in the area of ​​Vulcano Porto shows a slight increase, reaching medium-high values.

Following an order from the mayor of Lipari, the exclusion zone was reduced at the top of the crater of La Fossa. The PVMBG reported that the incandescence of the northern crater of Karangetang was periodically visible from January 5 to 10.

Daily white gas and vapor emissions were typically 150 m above the summit, but sometimes up to 200 m. From January 9 to 10, white and gray plumes rose up to 200 m.