During the last sedimentary phase of the Euganean Hills, around 43 million years ago, a first eruptive cycle took place.

Magma escaped from fractures in the sea crust and spread to the bottom forming dark basalt colored rocks. This type of volcanic rock can be observed near Teolo and on Monte Gemola.

At the end of this first eruptive cycle, a period of inactivity ensues during which the process of formation of the Euganean marls continues.

The second eruptive phase took place between 33 and 30 million years ago, in the Lower Oligocene.

It is still an underwater phase, but unlike the first eruptions, in this second cycle, the escaped magma was more acidic and viscous. The different types of magmatic material probably originate from the fusion of the basalt mantle and the base of the earth's crust. The ascending lava stationed in a shallow underground basin (between 3000 and 3500 meters) and, following fractional crystallization, the emergence of the lighter, or more acidic, magma was favored, while the more basic and the heaviest remained at the bottom of the eruptive canal. The discharge of this viscous magma led to the formation of the characteristic Euganean volcanic cones, which consist of rhyolite, trachyte and latite volcanic rocks. 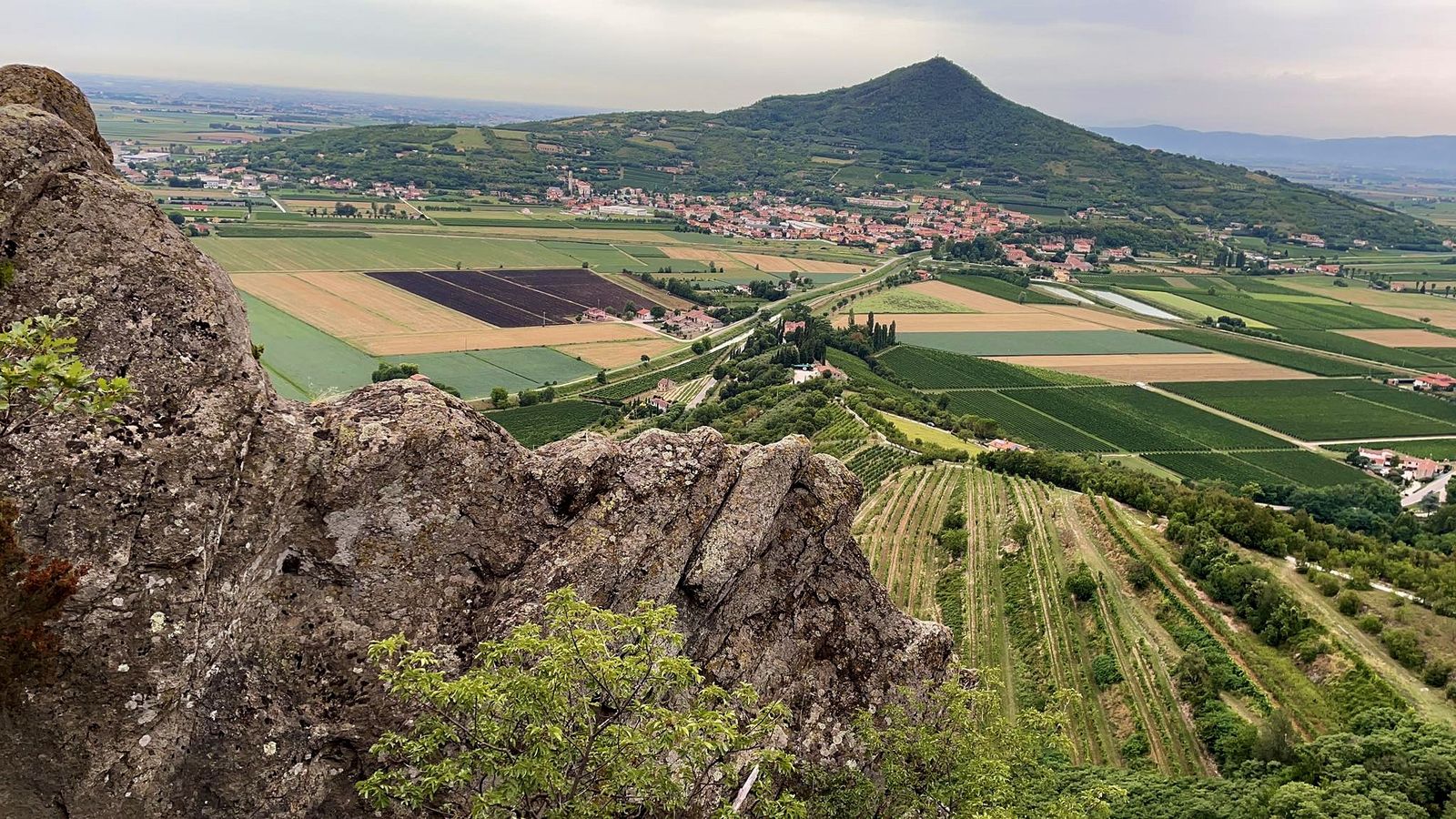 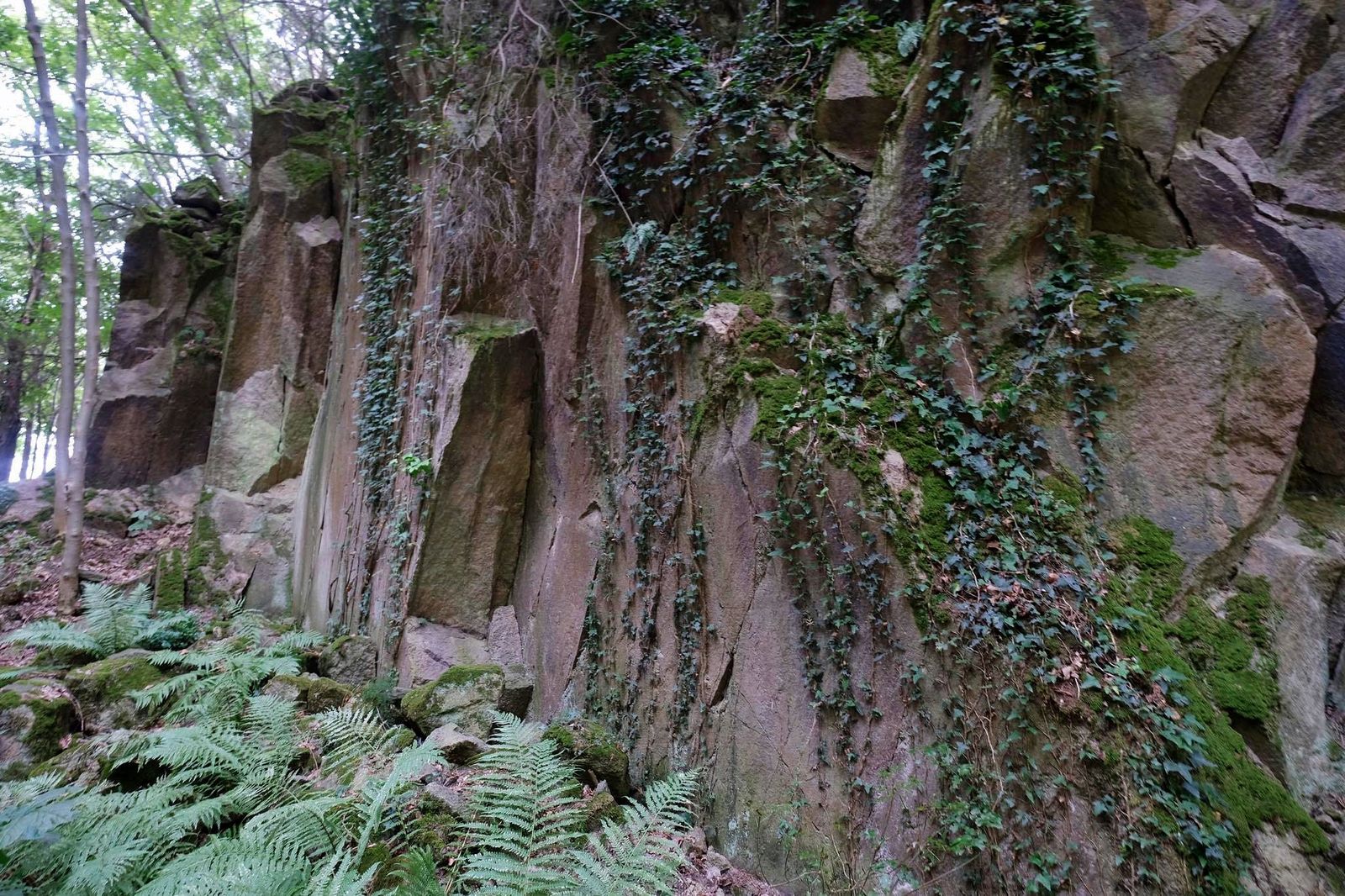 Trachyte is an effusive igneous rock, gray or yellowish in color with small dark crystals of mica and lighter areas of feldspar, which are very important from an economic point of view.
From a chemical point of view it is a neutral rock, with a percentage of silica between 65% and 55%. The term of transition between rhyolite and trachyte is alkaline quartzotrachyte, followed by alkaline trachyte and finally trachyte in the strict sense.

The trachyte can be found brecciated, as in the explosion chimney of Villa Draghi or in veins, even imposing, like Rocca Pendice, where it shows a columnar fissure.

Latite, dark in color, has a percentage of silica between 55% and 50% and phenocrysts of pyroxene, amphibole, plagioclase.
This rock is found at Baone in the laccolite of M. Cecilia, on M. Croce, M. Ceva and M. Sengiari. In the latter, the explosion chimney filled with latitic breccia is visible. The Mount Ceva group is also covered with an imposing carpet of breaches produced by the sudden cooling of the lava in contact with water. At the end of the eruptive cycle, the highest peaks emerged from the ancient sea forming an archipelago of craggy islets. Selective erosion over millions of years has created a diverse landscape, with the softer sedimentary blankets being broken down and washed away, creating the hard, polished and thin volcanic conical bodies.

The Euganean eruptive activity thus manifested itself while the other regions of the Veneto were in a phase of tranquility.

In Lessini, in fact, volcanism was active in the Paleocene and the Lower and Middle Eocene, and it was only at the end of the second Euganean eruptive cycle that the emission of basaltic lava resumed in the Berici and Marosticano.

Thermalism, known since Roman antiquity, has made the region famous. The thermal waters of the Euganean zone, of meteoric origin, come from the uncontaminated basins of the Lessini Mountains in the Venetian Prealps, at an altitude of around 1,500 meters. They flow underground to a depth of 2,000-3,000 meters where they are enriched with mineral salts and, after a journey of about 80 kilometers necessary to reach the establishments of the Euganean Baths, they spring again. at the surface at very high temperatures, sometimes above 85 ° C. It is assumed that the permanence times in the basement are about a few tens of thousands of years.

These waters, thanks to their chemical, physical and therapeutic properties, are qualified according to a medical classification of the 1930s still in use: they are salso-bromo-iodic hyperthermal waters. Colli Euganei - Apre a Montegrotto- the museum of ancient thermalism

Any land of volcanic origin has assets for crops.
Veneto wine was sung as early as the 14th century by the poet Francesco Petrarch (1304-1374), who retired here in his old age to cultivate grapes. The area covers approximately 1,300 hectares of vineyards on the slopes of volcanic and very limestone mountains; they have had a DOC designation since 1969 ... but that is another story ! 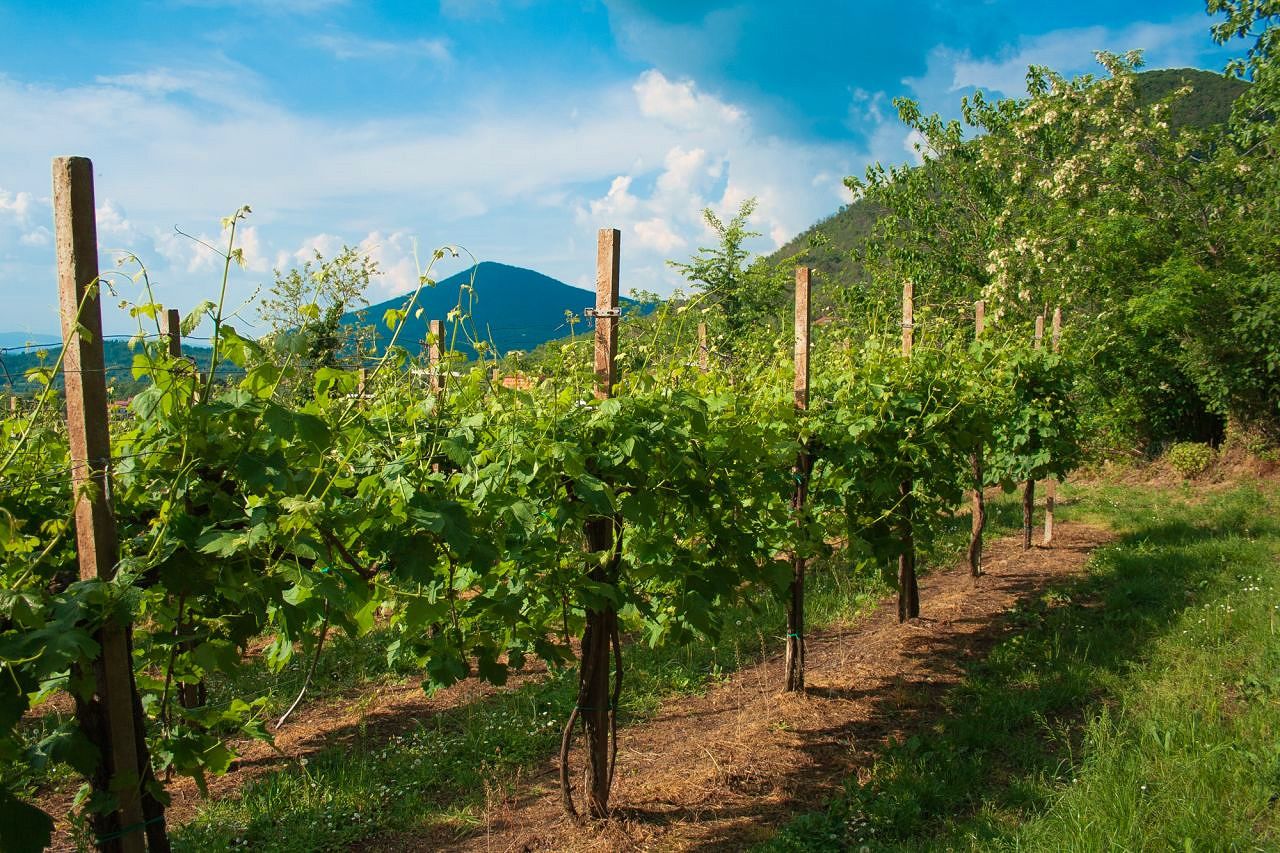