Pyroclastic avalanche flows were recorded at Merapi on February 2, 2022 at 3:58 p.m. WIB; the trace on the seismogram has an amplitude of 13 mm and a duration of 129 seconds. The glide distance is 2,000 m towards the Bebeng River (southwest). The Merapi remains in activity level 3 / siaga since November 5, 2020 The nocturnal incandescence of the crater began to be visible at least since January 11. A total of 14 thermal anomalies were identified in satellite data from January 13-28; anomaly intensity increased on January 17 and peaked on January 22. 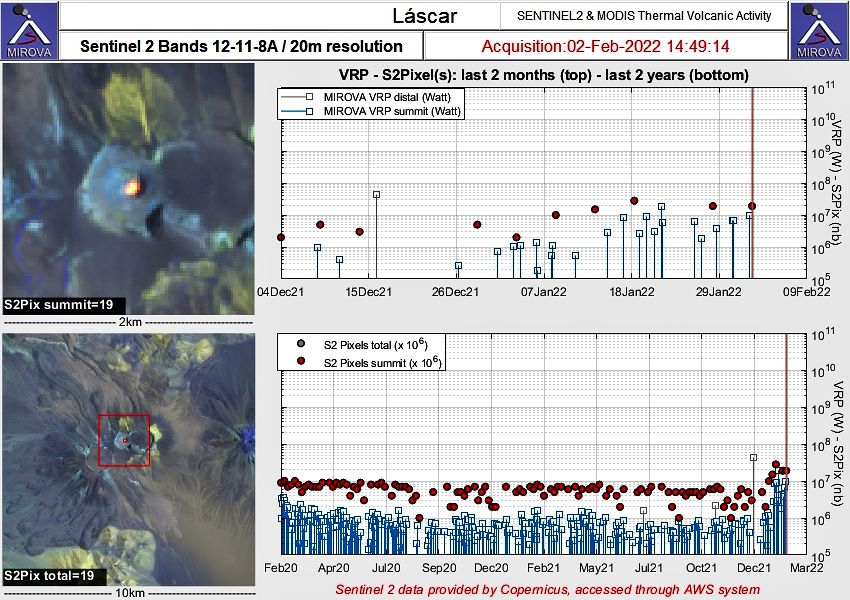 Gas and steam emissions were more frequent and robust compared to previous months, with the highest plume rising more than 1 km above the crater rim on January 22. Sulfur dioxide emissions were identified in satellite data on January 8 and 17; instruments at the EMU station, 6 km ESE, recorded increased emission rates from 17 to 19 January with an average peak of 1,787 tonnes per day on 18 January.

Seismicity was at normal levels throughout January 12-28. Low numbers and magnitudes of volcano-tectonic (VT) and long-period (LP) earthquakes were recorded by the seismic network, although 27 low-magnitude (M 1 or less) VT events were recorded on January 22 . Satellite images acquired on January 26 showed no recent morphological changes at the crater or deposits around the crater area.

The alert level remained at green (the lowest level on a four-color scale). MIROVA recorded 3 very high thermal anomalies (6005 MW, 3392 MW and 1532 MW) and 1 moderate, while FIRMS recorded more than a hundred thermal anomalies at Wolf Volcano, on Isabela Island in the Galapagos, during of the last 24 hours.These anomalies are related to lava flows to the south.