During the last 24 hours, thanks to the monitoring systems of the Popocatépetl volcano, 60 low intensity exhalations have been detected, accompanied by water vapor and gas. Today at 07:15 a small explosion was detected, generating an eruptive column less than 1 km above the crater. The winds scatter the ashes towards the Puebla side.

During the preparation of this report, a slight emission of volcanic gases with a North-East direction was observed.

The Popocatépetl volcanic alert traffic light is in YELLOW PHASE 2. Following the announcement of the eruption in yesterday's article, the latest update on the activity of the Ambae Volcano was released by the Vanuatu Department of Meteorology and Geohazards on February 18, 2022 at 2:08 p.m. local time:

"With this current volcanic activity, it's a helpful reminder that eruptions can occur at any level of unrest with little or no warning."
Areas and villages near the volcano, especially those exposed to wind directions, can continue to expect impacts from volcanic gases and/or ashfall.
The danger zone (danger zone A) remains 2 km around volcanic vents and in the area of ​​flowing streams. Additionally, the presence of remnant volcanic ash at the summit and around the island (deposited during the 2017/18 eruption) may be mobilized by precipitation. Villages near flowing streams (dangerous flow areas) can expect changes in stream behavior and higher than normal flows during heavy rains (CURRENTLY IN LA NINA SEASON) .
Residents of Ambae Island should be aware of dangerous water flows when approaching these creeks during heavy rains. It is a useful reminder that all tourism agencies, visitors, local authorities, residents of Ambae Island and the general public take this information into consideration.
The Department of Meteorology and Geohazards will continue to monitor this volcanic activity closely. More information will be provided if needed. 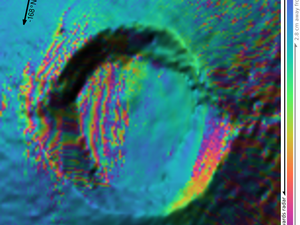 A small lava lake finally formed inside the crater of the Nyiragongo volcano, around 9 months after the last eruption on May 22, 2021.
This information is reported by MONUSCO experts after an overflight, Tuesday, February 15 of this volcanic mountain.

MONUSCO volcanologist expert, Dario Tedesco, after an observation flight above Mount Nyiragongo, indicates that, "for the first time since its eruption in May 2021, the formation of a small lava lake inside the crater”.

In his report, Dario Tedesco specifies that the current state of the Nyiragongo volcano is normalizing as after the 2002 eruption.
Small collapses of the old internal terraces are, according to him, at the origin of the dust or volcanic ash which is released into the atmosphere. He calls on the inhabitants, in particular of Goma, to follow the hygiene procedures enacted.

The Fuego Volcano Observatory reports 3 to 6 explosions per hour, with weak, moderate and some strong characteristics, which raise columns of gray ash to heights of 4,500 to 4,800 meters above sea level ( 14,764 to 15,748 feet), which disperse to the west and southwest for a distance of up to 20 kilometers;

They cause a weak fall of ash in San Pedro Yepocapa, Sangre de Cristo, Finca Palo Verde, Panimaché I, Morelia and other communities in this direction.

In addition to the avalanches produced by the explosions, avalanches are observed almost constantly towards the ravine of Ceniza, due to the outpouring of lava from the crater, maintaining a flow of 200 meters in length.

During the night and early in the morning, incandescent pulses reaching up to 100 meters high were observed above the crater. The explosions produce low and moderate rumblings with shock waves that vibrate the roofs and windows of houses in communities near the volcano. Sounds similar to a locomotive train changed from almost constant to periods lasting between 3 and 8 minutes.