- Strombolian activity with lava fountain from the Southeast Crater;

- continuous degassing and sporadic emissions of ash from the Bocca Nuova crater;

- fumarolic degassing of the Voragine crater;

- ordinary degassing with booming, discontinuous and modest emissions of ash from the northeast crater.

The observatory reports very low seismic fracturing activity; average amplitude of the volcanic tremor generally on low and medium levels with the exception of the lava fountain on February 10 where very high values ​​were reached.

At the geochemical level, the flow of SO2 is at a low level
Soil CO2 flux shows average values.
The partial pressure of dissolved CO2 in the aquifer shows values ​​in seasonal variability.
Latest available data shows Medium-High values ​​(data 01/26/2022) equal to 0.63, settling at Medium-High values.
Thermal activity in the summit area was high to very high in correspondence with the February 10, 2022 lava fountain. 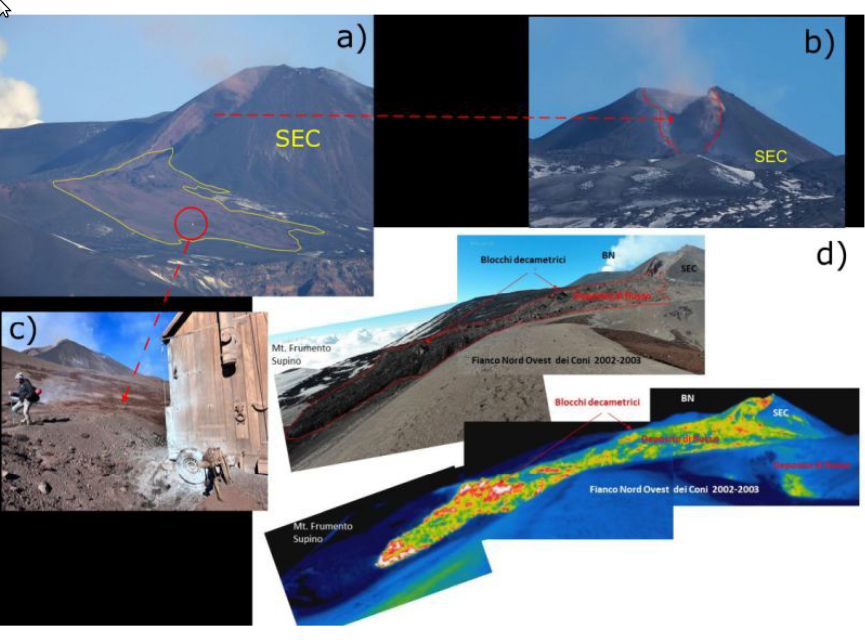 Etna - Overview of the pyroclastic flow deposit at 21:26 UTC on February 11 (a) with detail of the large niche on the southern flank of the Southeast crater and the damage caused to the hut along its course (c). - (d) overview in the visible and in the thermal of the same deposit, taken during the inspection of February 13, from which its high temperature is evident despite the time that has elapsed since its placement in place.- Doc. INGV OE

You will find the detailed activity by following the link to the complete bulletin, and the previous articles on this blog.

Some details on the pyroclastic flows of February 10:

Around 20:35 UTC, the first pyroclastic flows formed on the southern flank of the SEC. In particular, at 8:40 p.m. and 9:19 p.m., two streams of pyroclastic material traveled a few hundred meters towards Valle del Bove.
At 21:26 UTC, the largest pyroclastic flow occurred, which extended south and southeast, completely covering the northernmost of the 2002-2003 eruption craters (Mti Barbagallo), covering 1 .6 km and stopping at an altitude of 2750 m above sea level, after having damaged a hangar which was on its way. The flow generated a deposit consisting of materials with variable grain sizes ranging from decametric blocks to fine sand. Stromboli - 13.02.2022 - The crater terrace seen by the thermal camera placed on Pizzo above the Fossa with the delimitation of the crater areas Zone Centre-Sud and Zone Nord (Area N, Area C-S respectively). Abbreviations and arrows indicate the names and locations of active vents, the area above the crater terrace is divided into three height ranges relating to the intensity of the explosions. - webcam therm. INGV OE

Normal activity was observed during this period,
Strombolian-type explosive with projection activity in the North zone. The total hourly frequency of explosions fluctuated between medium values ​​(12 events/h) and high values ​​(21 events/h). The intensity of the explosions was low in the area of ​​the North crater and variable from low to medium in the area of ​​the Center-South crater.
The explosive activity was mainly produced by 3 (three) eruptive vents located in the North crater area and 3 (three) eruptive vents located in the Center-South crater area. All the mouths are placed inside the depression which occupies the terrace of the crater.

The seismological parameters monitored do not show any significant changes.
Stromboli soil deformation monitoring networks
Regarding the geochemistry: the lux of SO2 is at an average level; the CO2 flux in the crater area remains stable at high values.
The C/S value in the updated and validated plume in the plume is 11.84, settling at medium-high values.
The isotopic ratio of helium, slightly decreasing, is at average values ​​of R/Ra 4.36
The thermal activity observed by satellite was at a low level. The eruption at Kīlauea Volcano's summit in Halema'uma'u Crater has continued with minor fluctuations in lava production over the past 24 hours. All recent lava activity has been confined to the crater, and there is no indication of activity migrating elsewhere on Kīlauea.

Halemaʻumaʻu Lava Lake Observations: Lava effusion from the western vent in Halemaʻumaʻu Crater has continued over the past 24 hours. On February 14, 2022, at 3:50 a.m. HST, the surface of the lava lake began to rise, in conjunction with summit inflation, and at noon that day its elevation was 835 m above sea level. from the sea. The surface level of the lava lake then remained relatively constant until 2:40 a.m. HST this morning, when the summit entered a period of deflation. At 8:30 a.m. HST this morning, the surface of the lava lake dropped 5m. The active lava lake is now about 89 meters deep compared to when the lava emerged on September 29, 2021. Measurements on January 25, 2022 indicated that the total volume of lava effused since the start of the eruption was about 45 million cubic meters at that time. Summit Observations: Summit tiltmeters indicated that Kīlauea's summit was entering a period of inflation beginning at 3:45 a.m. HST yesterday. Inflation continued until 11 p.m. yesterday, at which time summit tiltmeters indicated static or unchanged deformation at the summit. As of 2:40 a.m. HST this morning, the top entered a period of ongoing deflation. Seismic data shows that the volcanic tremor signal persisted throughout the 24-hour period. However, at 7:50 a.m. HST this morning, the volcanic tremor signal strength has diminished. Seismic activity at the summit remains below the background level. A sulfur dioxide (SO2) emission rate of around ~2,800 tonnes per day (t/d) was measured yesterday, February 14. Since February 9 of this year, the activity of the Fuego volcano begins an effusive phase which generated a lava flow in the direction of the Ceniza ravine, with a length which varied between 75 and 200 meters.

Seismic and acoustic monitoring parameters and field observations made by OVFGO observers indicate that starting yesterday (February 14), said effusive activity has increased, generating periods of high activity that last a few minutes. a few hours away. As a result, the extrusion of magmatic material generates greater degassing and incandescence at night and early in the morning.

Strombolian-like explosions increased in number and intensity, and sounds similar to train locomotives and airplane turbines were more prolonged.

The RSAM graph reflects the increase in amplitude of seismic station FG16 and its tendency to continue to show periods of increase above its baseline activity.

Due to the above, it is expected that the lava flow will continue to be active and even increase its length in the following hours or days, causing constant avalanches towards the Ceniza ravine and degassing and prolonged incandescence in the crater. In the next few hours or days, moderate and strong explosions of the Strombolian type should continue, accompanied by rumblings, shock waves, noises of degassing and avalanches through the various ravines. It is not excluded that other lava flows will be generated in the other ravines or that an explosive activity of greater intensity and with abundant material (gas / ash).