Isla San Jorge - Velas and its port - photo via InVolcan

Since March 19, the island of São Jorge, in the Azores archipelago, has been hit by a seismic swarm that has registered more than 400 earthquakes with a magnitude of up to 3.3 according to information provided by the Azores Seismo-Volcanic Monitoring and Information Center (CIVISA). 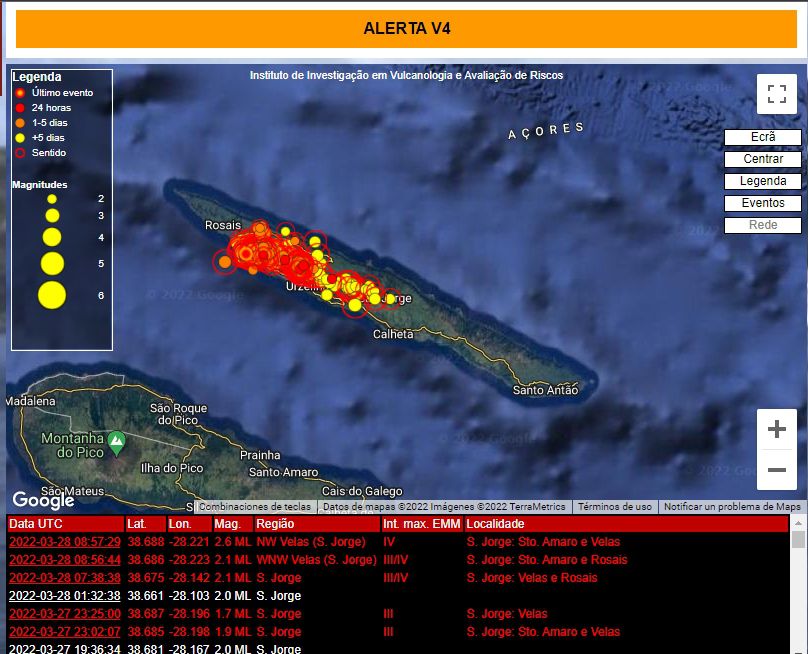 In the initial phase of this recent seismic swarm, it was questioned whether the earthquakes had a volcanic or tectonic origin, given that the Azores archipelago is a volcanic and tectonically active region.

The Volcanological Institute of the Canary Islands (INVOLCAN), thanks to the analysis of synthetic aperture radar data acquired by the Sentinel-1 satellite of the European Space Agency, has been able to observe that in recent weeks the said island has suffered a deformation of the terrain consistent with a source of volcanic nature. In concrete terms, a technique known as "satellite interferometry" was used, which compares the radar images obtained at two different dates to detect phase variations which could be associated with deformations of the relief of the earth's surface. São Jorge - Sentinel-1 / Copernicus interferometry - modeling of an intrusion in the form of a dyke - Doc. via InVolcan - one click to enlarge

The figure shows the observed data and the synthetic model of a magmatic intrusion along a subvertical fracture, a dyke. The estimated volume for this intrusion is around 20 million m³, a value comparable to what was observed by ground deformation before the Cumbre Vieja eruption in 2021.
This activity was possible thanks to the VOLRISKMAC II project (MAC2/3.5b/328) co-funded by the INTERREG V-A Spain-Portugal MAC Cooperation Program 2014-2020. More than three months after the end of the volcanic eruption in La Palma, in the Canary archipelago, temperatures in parts of the Cumbre Vieja craters are still close to a thousand degrees.

This was measured by scientists from the National Geographic Institute (IGN), who recorded 974 degrees in a fissure in the volcano's southernmost crater, where incandescent rock is observed, as reported by the Tuesday March 22.

After the heavy rains of March 28 in the Llano de Aridane, La Palma, the temperature of the lava flows is still high enough to evaporate the water, which then condenses into a low fog. GUAYOTA La Palma as of 03.25.2022 - Weekly informative graph of seismo-volcanic activity on the island of La Palma - enlarge at: https://www.involcan.org/wp-content/uploads/GUAYOTA/guayota-lpa -en-co.pdf

With each incursion by researchers from the Canary Islands Underwater Volcanology Project (Vulcana), the Spanish Institute of Oceanography (IEO) and the Higher Center for Scientific Research (CSIC), a new aspect of the Enmedio volcano is discovered, a Underwater crater located just between Gran Canaria and Tenerife, in the Canary Islands, in an area that records some seismic activity. 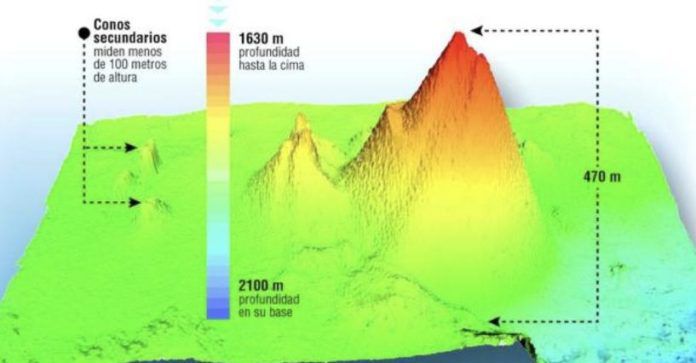 Enmedio submarine volcano - IEO-CSIC bathymetry revealing a terrace on its western side at 1,900 meters depth and two secondary cones 500 meters southwest of the main building

In this latest expedition, conducted between February 14 and March 3, the researchers have new measuring and sampling instruments capable of reaching a depth of about 2,100 meters, where the base of a underwater mountain 470 meters high, whose peak is located 1,630 from the surface of the sea. "It is a typical volcano, the one a child would draw; a very triangular mountain. Its crater is split, with landslides on the north and south slopes. In addition, it has a terrace on its western side at 1,900 meters depth and two secondary cones 500 meters southwest of the main building", explains Eugenio Fraile, oceanographer and leader of this research project, about the aspect of the volcano defined with precision thanks to the new multibeam probe of the "Ángeles Alvariño" which has made it possible to increase the resolution of the 3D digital model of the volcano, with pixels representing grids of 15x15 mè very.

The presence of hydrothermal activity must be corroborated by chemical analysis of the samples to identify the content of nutrients, heavy metals and carbon dioxide that it could emit.

The challenge of the next Vulcana campaign concerning the Enmedio volcano will be to explore the upper part of the crater with the Liropus 2000 unmanned underwater vehicle.