According to I.G.Peru, the activity of Sabancaya remained at moderate levels during the period from February 21 to 27, 2022.

An average of 35 daily explosions, accompanied by plumes of gas and ash, reaching up to 2,500 meters above the summit, are mentioned.

The I.G. recorded 210 earthquakes of volcanic origin, associated with the circulation of internal magmatic fluids, and VT-type earthquakes, related to rock fracturing, mainly to the northwest of the volcano.

No significant deformation anomalies. Three thermal anomalies, with a maximum value of 20 MW, are reported, in connection with the presence of a superficial lava body in the crater.

The volcanic alert level remains at naranja, with an inaccessible zone of 12 km radius around the crater. During February, the OVPF recorded at the level of the Piton de la Fournaise massif in total:

• 58 superficial volcano-tectonic earthquakes (0 to 2.5 km above sea level) under the summit craters;

• 401 collapses (in the Cratère Dolomieu, the ramparts of the Enclos Fouqué and the Piton de Crac, and of the Rivière de l'Est). 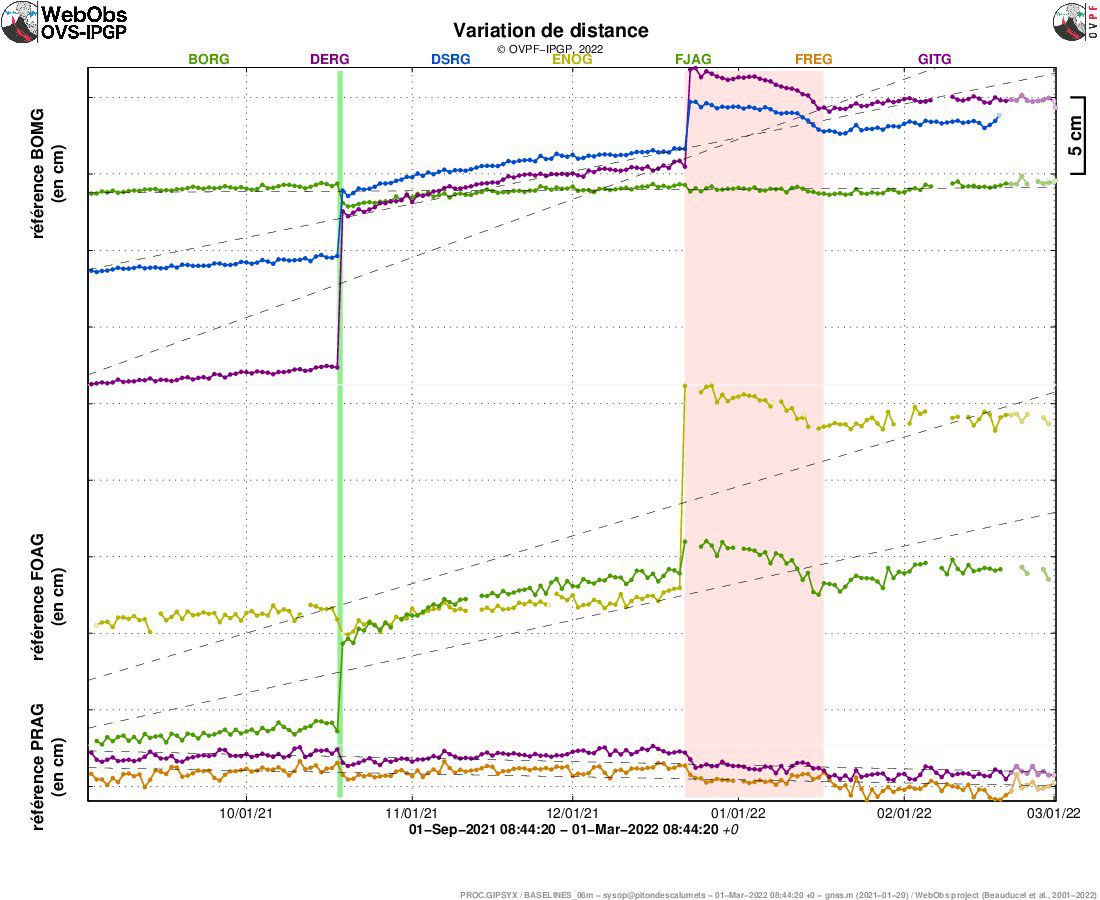 Piton de La Fournaise: Illustration of the deformation over the last six months (the eruptive and intrusive periods are respectively in red and green). Here are represented the variations in distance between two GPS receivers crossing the Piton de la Fournaise building, at the top, at the base of the terminal cone and in the far field. A rise is synonymous with elongation and therefore swelling of the volcano; conversely a decrease is synonymous with contraction and therefore deflation of the volcano (© OVPF IPGP).

The month of February was also marked by numerous landslides (in the Cratère Dolomieu, the ramparts of the Enclos Fouqué and the Piton de Crac, and the Rivière de l'Est) following the passage of cyclones Batsirai and Emnati at most near Réunion, on 2-4 February and 20-21 February respectively. Between February 21 and 27, the INGV reports for Etna:

Strombolian activity and lava fountains from the Crater of
South East; degassing at the Bocca Nuova crater and the Voragine crater; degassing and ash emissions from the northeast crater.

Seismic fracturing activity is low; the average amplitude of the volcanic tremor generally remains on low and medium levels, with the exception of the lava fountain on February 21, where
very high values ​​were reached.
Weak infrasonic activity, with the exception of the February 21 lava fountain, during which the infrasonic signals reached very high values.

SO2 flux at a medium-low level and moderately increasing.
The soil CO2 flux shows average values ​​with an upward trend recorded over the past three days.
The partial pressure of dissolved CO2 in the aquifer shows values ​​in seasonal variability. Map of the Etna summit area on a shaded model of the terrain, flows and morphological characterization of the SEC crater rim. The map was established by integrating the analysis of Sentinel-2 and PlanetScope satellite images, respectively from February 23 and 24, and the GPS track acquired by INGV staff on February 24, 2022.

In less than half an hour, the Strombolian activity evolved into a lava fountain which, while intensifying, produced an eruptive column at 11:20 UTC, which reached a height of 10 km above the level of the sea, always extending in a southeasterly direction.

In addition, from 11:05 UTC, the formation of an overflow of lava was observed which from the southern slope of the
DRY, spreading in a southwesterly direction.

At around 12:40 UTC, the fountain episode was over, having produced a volcanic cloud that had reached an estimated maximum height of about 12 km above sea level Strombolian activity, which still persisted, gradually ceased around 12:50 UTC.
Regarding the effusive activity, at 13:00 UTC, the lava flow that propagated in the South-West direction was still under tension, while from 14:00 UTC, the surveillance cameras and the INGV-OE field staff reported another poorly fed lava flow that propagated down the slope to the east of the SEC, the front of which was at an estimated altitude of around 2900m.

At 18:00 UTC, both lava flows appeared to be poorly fed. February 22, due to adverse events
meteorological conditions, the observation of the state of activity was only possible from approximately 18:00 UTC. From the images of the cameras, it was observed that weak activity still persisted
Intra-crateric Strombolian in the SEC and also the presence of a lava flow which propagated along the east side of the crater.
Subsequently, in the days of February 23 to 25, the weak Strombolian activity produced sporadic and occasional ash emissions which quickly dispersed near the summit area. As for the effusive enterprise, on the morning of the 23rd, the lava flow from the evening before was already cooling. Finally, during the week, following the episode of the lava fountain of the morning of the 21st, several modest collapses were observed
in the southern SEC breach and on the eastern upper slope resulting in very dilute ash puffs.