Ash falls were reported in several sectors of the city of Manizales and the municipality of Villamaría, which is linked to the emissions of gas and ash from the Nevado de Ruiz volcano recorded during the day of April 25, during the night and April 26.
These emissions were linked to seismic signals of moderate energy level, associated with the movement of fluids inside the volcanic conduits.

The emission of ash is such that the activity of La Nubia airport has been constantly interrupted due to the possibility of contaminating the windows with these ashes and causing an accident. 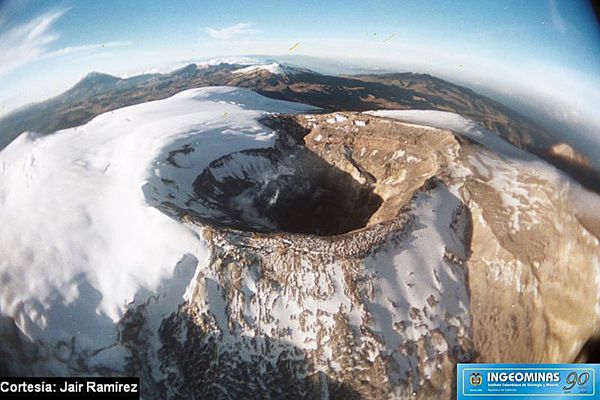 Seismicity related to fluid dynamics inside volcanic conduits decreased the number of earthquakes and increased the seismic energy released, compared to the previous week.

Seismicity associated with rock fracturing increased in number of earthquakes and seismic energy released, compared to the previous week. This seismic activity was located mainly on the western and southeastern flank of the volcano and to a lesser extent in the northeastern and southwestern sectors.
from the Arenas crater. The depth of the earthquakes varied between 0.5 and 6.2 km. The maximum magnitude recorded during the week was 2.0 ML (Local Magnitude), corresponding to the earthquake that occurred on April 25 at 4:48 p.m. (local time), located 2.2 km southeast of the Arenas crater, at a depth of 3.6 km.

Changes were observed in the relative temperature of the material emitted by the FLIR cameras (Thermal Cameras) of the network
multi-parameter volcanic monitoring from the SGC. Among the signals associated with gas and ash emissions, those that occurred yesterday and this morning stand out, corresponding to several multiple fluid events.
The deformation of the volcanic surface, measured from GNSS (Global Navigation Satellite System) stations and electronic inclinometers, continued to show a stable trend.
The volcano continues to emit water vapor and gases, mainly sulfur dioxide (SO2). Emission levels were estimated from data obtained from Scandoas stations and
satellite image processing. During the past week, thermal anomalies have been reported in the volcano.
The column of gas and steam reached a maximum height of 2333 m measured at the top of the volcano on April 24. The dispersion of the column was governed by the direction of the wind, which showed a predominant trend towards the northeast, southeast, west and northwest of the volcano.
the level of volcanic activity is maintained at YELLOW or III, however, an acceleration of the volcanic process and consequently changes in the level of activity of the volcano are not excluded. The main crater plume of Gunung Api Ibu is white and gray with fine, medium to thick intensity, about 200-1500 meters from the summit.

The activity level is at 2 / waspada; Communities around Mount Ibu and visitors/tourists are advised not to travel within the 2.0 km radius and the sector expansion is 3.5 km to the crater opening in the northern part from the active crater of Mount Ibu. At 01:56:00 local time on April 26, 2022, an eruption is recorded at the Rincon de la Vieja volcano. The height reached by the column is unknown due to the visibility conditions of the site.
Duration of the activity: 2 minutes.
Seismic activity is similar, compared to yesterday.
At the time of this report, the winds are blowing to the southwest.
A discontinuous tremor of variable amplitude and dominant frequency is recorded. A probable low amplitude eruption was detected at 01:56 with no visibility. Map of the Campi Flegrei caldera (left) and the Pisciarelli hydrothermal area (right). In the left panel, the red line indicates the edge of the caldera and the orange circle highlights the Solfatara-Pisciarelli hydrothermal area. The right panel shows the fumarolic field of Pisciarelli. The blue circles indicate the position of the seismic stations (CPIS, CPS1 and CPS2) and the green circle indicates the position of the main fumarole. (Modified by Giudicepietro et al.2019).

In the week of April 18 to 24, 2022, 66 earthquakes were recorded in the Campi Flegrei area (Mdmax = 2.9 ± 0.3).
The average value of the uplift velocity in the maximum deformation zone from December 2021 is about 13 ± 2 mm/month. Inflation recorded at the RITE GPS station is approximately 88.5 cm in January 2011.
Soil CO2 fluxes measured last week showed no significant changes. The temperature sensor installed in a fumarole emission 5 meters from the main Pisciarelli fumarole showed an average value of ~95°C with a minimum value of ~87°C in conjunction with rainfall events.