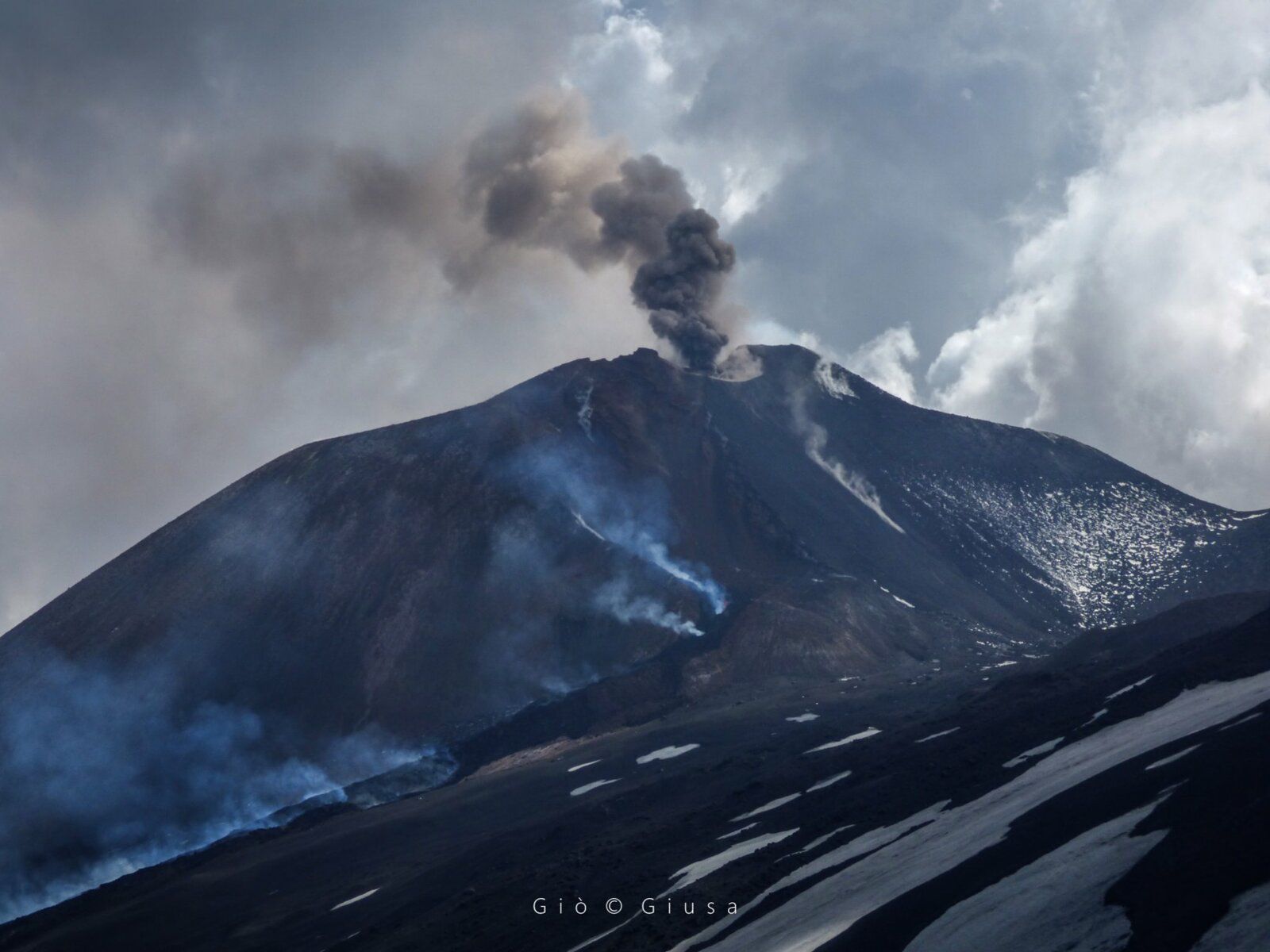 After the opening of an effusive vent on the northern flank of the Southeast Crater of Etna, on May 12, 2022 at 8:38 p.m. local time, placed at an altitude of approximately 3250 m. asl., the effusive activity stabilized in the following days, producing a lava flow which is developing towards the ENE in the desert Valle del Leone, whose most advanced front has currently reached an altitude of between 2400 and 2300 m a.s.l.
At the same time, the SE crater is affected by a discontinuous Strombolian explosive activity of variable intensity which, in the most intense phases, produces a modest emission of ash which is rapidly diluted in the atmosphere.

From the seismic point of view, the trend towards the gradual increase in the average amplitude of the tremor continues in the range of high values. The sources of the tremor are located in the Southeast crater around 3000 m. above sea level.

The infrasonic activity is of medium-low level and is mainly located in the Bocca Nuova region and from day 14 also in the southeast crater. The amplitudes are medium-low.
From a ground deformation perspective, the GNSS and tilt monitoring networks have not shown any significant changes over the past few hours. 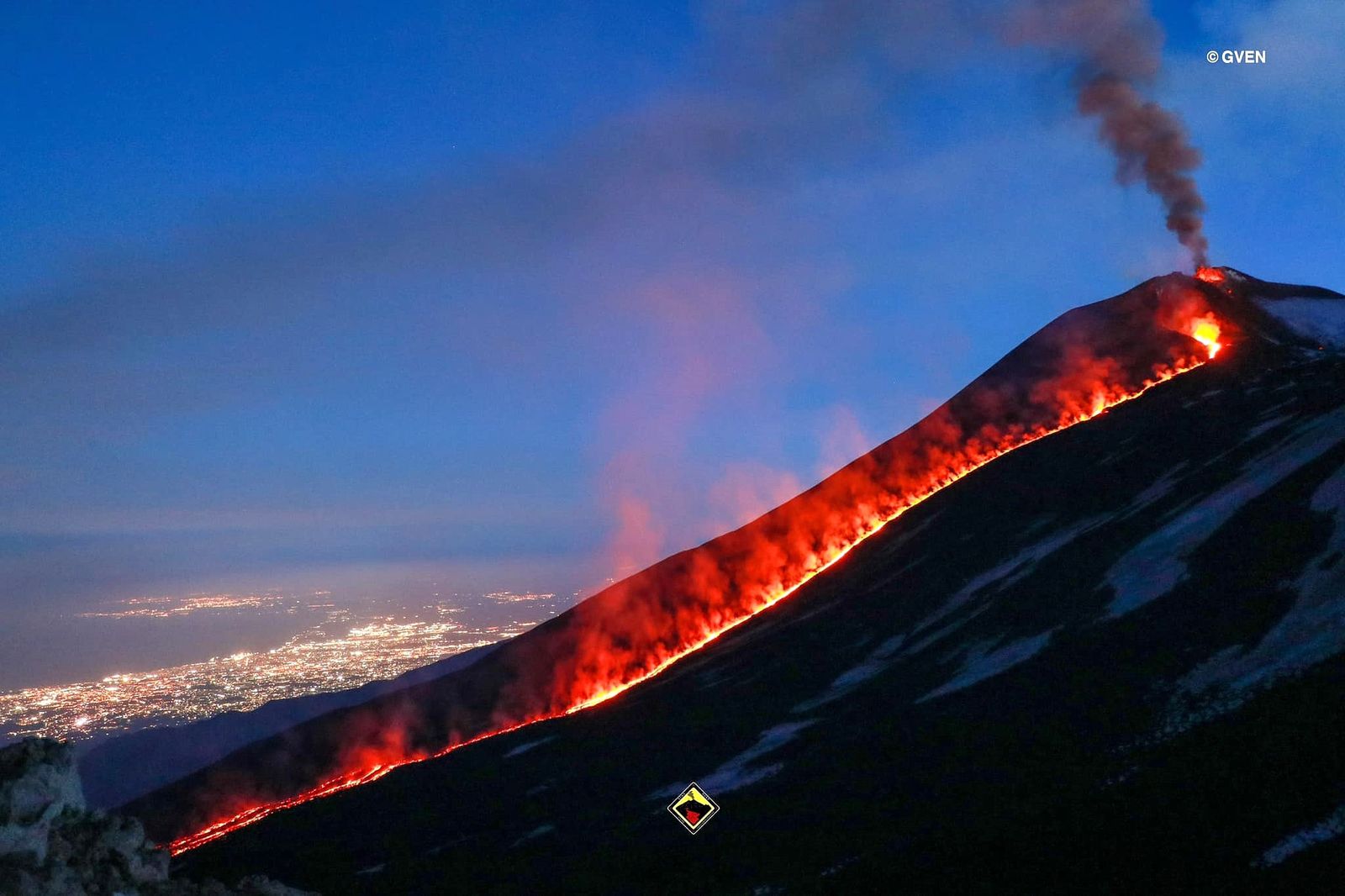 Etna SEC - the lava flow, the ash plume and Catania after sunset, at an altitude of 2830 meters. - photo Guide Vulcanologiche Etna Nord - one click to enlarge

The INGV reports that the maximum temperatures of the fumaroles emitted at the level of the crater of La Fossa in Vulcano are stable around 380°C, for the week of May 9 to 15, 2022.
Soil CO2 flux in the summit area is not available; the CO2 flux at the base of the La Fossa cone and in the Vulcano Porto area continue to show a slight downward trend, but remain at medium-high values; in the Faraglione site, there are values ​​close to the basic values.
due to technical issues at the station, which are being resolved.
The SO2 flux in the crater area is at a medium-high level and decreasing
The concentration of magmatic species (CO2, He, N2) in fumarole gases is slightly decreasing.
The physico-chemical parameters of the thermal aquifers show stable or decreasing anomalies.
Local low-level seismic activity.
The network of permanent GNSS stations has not registered any significant changes. According to the Smithsonian Global Volcanism Program, Kavachi Volcano entered an eruptive phase in October 2021 and satellite data showed discolored water around the seamount for several days in April and May 2022.

Images acquired May 14, 2022 by the Operational Land Imager-2 (OLI-2) on Landsat 9, show a plume of discolored water emitted by the submarine volcano, which is about 24 kilometers (15 miles) away. south of Vangunu Island / Solomon Islands.

Prior to this recent activity, large eruptions were observed at Kavachi in 2007 and 2014. The volcano erupts almost continuously, and residents of nearby inhabited islands often report visible steam and ash.