Mont Garet / Gaua - plume of gas and ash, seen from the airport on May 3, between 9 and 9:30 a.m. - photo Vanuatu Geohazads Observatory

The alert bulletin for Gaua / Vanuatu was published by the VGO on May 3, 2022 at 3:16 p.m.:
This is the latest update indicating that Gaua's volcanic activity has increased in the high level of major unrest. The Volcanic Alert Level remains at Level 2.
Ground observations and satellite data have confirmed that current activity is an ongoing volcanic vapor cloud that may contain volcanic gases at Mount Garet.

This morning, a large thick plume of ash was emitted from the vent after a loud explosion sound reported by villagers, especially in the village of Naveto, northeast of Gaua.
Volcanic hazards remain on the Gaua Volcanic Cone (eg, volcanic gases). The level of risk for visitors accessing the areas around Mount Garet is high. Villages exposed to the direction of the wind can expect the impact of volcanic gases and/or ashfall and other volcanic hazards could occur at any time in such a state of major unrest.

The Volcanic Alert Level (VAL) for Gaua Volcano has been at Level 2 since January 31, 2018. Current observations are consistent with Volcanic Alert Level 2 activity. Level 2 indicates “Major Level of Unrest ; The danger zone is on the volcanic cone”. With this current volcanic activity, it's a helpful reminder that eruptions can occur with little or no warning.

The Vanuatu Meteorology and Geohazards Department will continue to monitor this volcanic activity closely. More information will be provided if needed. 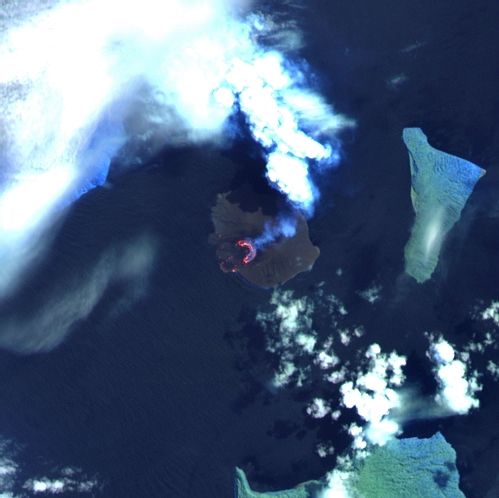 At Anak Krakatau,  Sentinel-2 images from May 2 shows an incandescent horseshoe edging the new cone and a few hot spots where the lava meets the sea.

Seismicity is characterized, between 00 and 12h, by continuous tremor with an amplitude of 0.5 to 10 mm dominating at 2-1 mm.

During the afternoon, 5 low frequency earthquakes, 4 shallow volcanic earthquakes, and continuous tremor with an amplitude of 0.5 to 10 mm, dominating at 1 mm, were recorded.

The activity level remains at 3 / siaga, with a non-accessible zone of 5 km radius. In April 2022, the OVPF-IPGP recorded at the level of the Piton de la Fournaise massif in total:

- 42 superficial volcano-tectonic earthquakes (0 to 2.5 km above sea level) under the summit craters;
- No deep earthquakes (below sea level);
- 1.222 landslides (in the Cratère Dolomieu, the ramparts of the Enclos Fouqué and the Piton de Crac, and the Rivière de l'Est).

Seismicity at Piton de la Fournaise was down slightly in April 2022 compared to the previous month with an average of 1.4 superficial volcano-tectonic earthquakes per day compared to around 2.5 earthquakes per day in March. Most of these events were located below the southeast rim of the Dolomieu crater. The month of April was also marked by numerous landslides (in the Cratère Dolomieu, the ramparts of the Enclos Fouqué and mostly at the broken of the Rivière de l'Est).

The inflation which continued throughout the month of April, as well as the increase in CO2 fluxes in the ground, witnessed a replenishment and a pressurization of the superficial magmatic reservoir by upwellings of deep fluids. This process of recharge from the depths to the superficial reservoir can take several days to several weeks before the reservoir roof weakens and ruptures, giving rise to an injection of magma towards the surface and an eruption, but can also stop without giving rise to an eruption in the short term. Piton de La Fournaise - Illustration of the deformation over the last six months (the eruptive and intrusive periods are respectively in red and green). The variations in distance between two GPS receivers crossing the Piton de la Fournaise building are shown here, at the top (reference BOMG; top), at the base of the terminal cone (reference FOAG; middle) and in the far field (reference PRAG; bottom) (see location in Figure 5). A rise is synonymous with elongation and therefore swelling of the volcano; conversely a decrease is synonymous with contraction and therefore deflation of the volcano (© OVPF-IPGP)