After small phreatic eruptions from June 11 to 15, moderate activity continues at Ebeko, in the Kuril archipelago.

According to visual data from Severo-Kurilsk volcanologists, explosions sent ash up to 2.0 km a.s.l., ash clouds drifted northeast from the volcano. Satellite data showed the volcano was obscured by clouds.

The aviation code is Yellow. During the past 24 hours, thanks to the monitoring systems of the Popocatépetl volcano, 40 low intensity exhalations have been detected, accompanied by water vapor, volcanic gases and slight amounts of ash. In addition, low amplitude tremor segments were recorded which totaled 41 minutes and a volcano-tectonic earthquake of magnitude 1.4.
The volcano is no longer observed after due to the intense clouds in the area. They generate weak to moderate avalanches in the rim of the crater, with material reaching the limit of the vegetation.

The rains in the area of ​​​​the volcanic complex are currently generating a lahar in the Barranca Ceniza, a tributary of the Achíguate River, with moderate to heavy characteristics due to the rains that persist in the area. The lahar descends fine and hot volcanic materials, in addition to carrying branches and tree trunks, as well as blocks from 30 cm to 1.5 meters in diameter. The rains of the past few days have kept the volcanic deposits saturated with moisture, so lahars will continue to be generated at night and early in the morning. - 2 earthquakes of magnitude less than 0.1, between 0.5 and .9 km deep below the surface. This superficial volcano-tectonic seismicity is associated with the formation of micro-fractures in the volcanic edifice.

- 1 earthquake with a magnitude of 1.6, located 13.8 km deep below the surface, about 8 km away north-northwest of Le Prêcheur. This earthquake could be associated with fracturing inside the Caribbean plate located under the volcanic edifice.

None of these earthquakes were felt by the population.

The zone of degassing at sea at shallow depth between St Pierre and le Prêcheur is still observed. The IGP took fluid samples in order to understand the origin of this degassing and to assess its possible relationship with the Mount Pelée hydrothermal system. 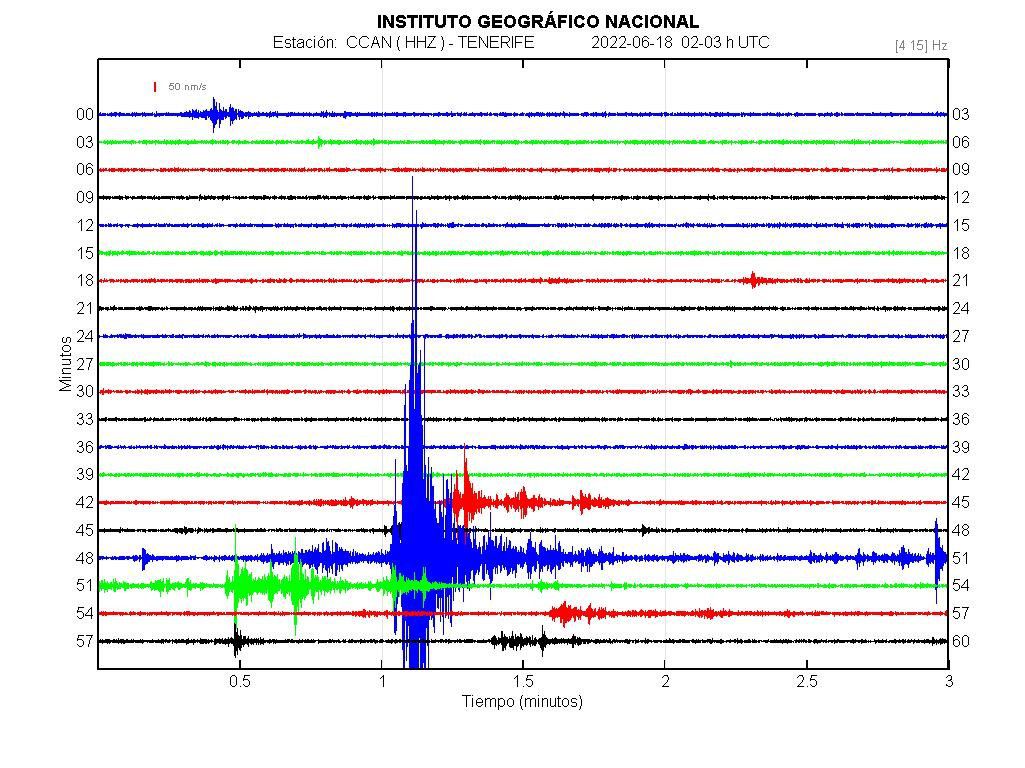 The seismo-volcanic swarm continues in Tenerife.

A new, much deeper point of activity at 23-26 km, with at least three localized events, all of the largest localized magnitudes of 2, 1.3 and 1.6. These events nearly flank a line in a NNW - SSW direction, as happened at El Hierro or the La Palma eruption area.

On the other hand, there were more tremors between the most superficial 17 and 11 km in the southwestern area of Pico Viejo and the Caldera de Ucanca, highlighting the presence of some more superficial between 8 and 9 km, indicating that the system is under pressure.

A deep magma intrusion towards the magma chamber is possible, but remains to be confirmed.