On Etna, new fractures have been observed at the base of the northern wall of the Valle del Bove, in the Serracozzo area, from the most downstream part of this fracture system, lava is released.

The inspection carried out by INGV-OE staff shows that the effusive vent opened at the end of the afternoon of June 7, 2022 is located at an altitude of approximately 1900-1950 m. The flow it emits is poorly fed and the lava flow has expanded by a few tens of meters. On the other hand, the effusive activity of the vents opened on May 29 continues unchanged, between 2900 and 2700 m, the active lava fronts reaching an altitude of about 2000 m. Etna Valle del Bove - new fractures at the base of the north wall - photo Braconi 07.06.2022 via INGVvulcani

Regarding the average amplitude of the volcanic tremor, since late yesterday evening, there is a phase of gradual decrease which has increased this parameter from high to medium-high values. The sources of the tremor are located in the SE crater area at an altitude of approximately 2900 meters above sea level. Infrasonic activity is weak, however the strong wind this morning may have affected the detection of infrasonic events . From an analysis of the ground deformation signals, no noise-free variation in the last hours at the clinometric stations and the GNSS network is deduced 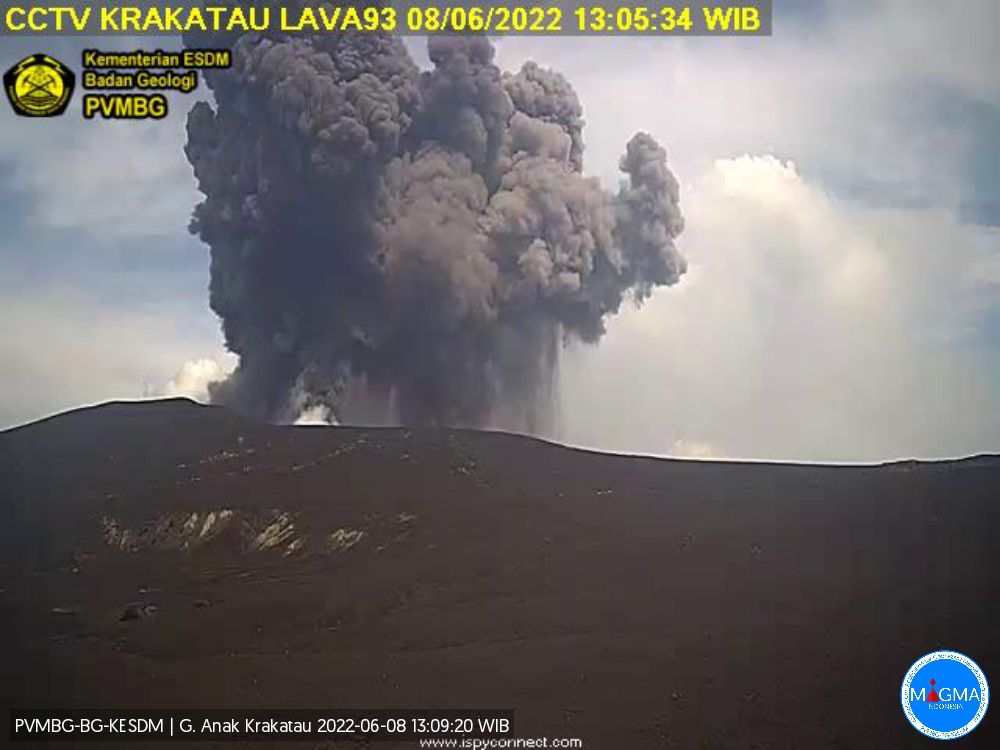 Mount Anak Krakatau experienced an eruptive episode on Wednesday, June 8, 2022 at 1:04 p.m. WIB, with a gray and thick ash plume observed ± 500 m above the summit (± 657 m above sea level). This eruption was recorded on a seismograph with a maximum amplitude of 50 mm and a duration of 75 seconds.

People/visitors/tourists/climbers should not approach Anak Krakatau or engage in activities within 5 km of the active crater. The I.G.Peru informs us of the moderate activity of Sabancaya during the week of May 30 to June 5, 2022; it is characterized by an average of 9 daily explosions, accompanied by plumes of gas and ash reaching 1,500 m. above the top.

The seismicity counts 230 earthquakes of volcanic origin, associated with the circulation of magmatic fluids and VT earthquakes, linked to the fracturing of rocks.

Six thermal anomalies, with a maximum value of 9 MW, are associated with the new lava dome in the crater. At Vulcano, the maximum emission temperatures remain stable around 382°C., with a weekly average of 379°C.
The soil CO2 flux in the summit area shows an average value of about 6000 g/m²/day.
The SO2 flux in the crater area is at a medium-high level
The CO2 flux at the base of the La Fossa cone and in the Vulcano Porto area recorded in the C. Sicilia sites, and P4max remain at medium-high values; there is a slight downward trend, on the Faraglione site the values ​​are stable.
The physico-chemical parameters of the thermal aquifers show values ​​without significant changes.
The phase of general increase in local micro-seismicity continues, linked to
hydrothermal fluid dynamics.
No earthquake with Ml >= 1 in the Vulcano area.
Data from the permanent GNSS network did not show any significant variations
during the week.

Data from the network of clinometric stations on the island did not show any significant changes during the week.

Monthly CO2 flux campaign: a slight decrease in CO2 emissions is observed in the Porto volcano area; average CO2 emissions from soils still remain at abnormal levels.
Monthly well campaign: a decrease in the supply of spring fluids is generally observed in the thermal aquifer, which however still remains at abnormal levels in certain monitored sites.