Activity of Etna, Puracé, Nevado del Ruiz and Cities on Volcanoes 11 in Crete. Etna - map of active and cooling flows, and recent fractures (in blue) - Doc INGV latest bulletin 06.2022 - one click to enlarge

The National Institute of Geophysics and Volcanology, Etna Observatory, announces that from the inspections carried out by the staff of the Observatory on June 13, 14 and 16 and from the surveillance cameras, it has been observed that the effusive activity at the mouth of about 2700 m s.l.m. , reported in the previous release, ceased on June 13, while between June 15 and 16 the flow of lava at the mouths at an altitude of about 1900 m a.s.l. in the Serracozzo region. In addition, no ash emission was observed from the southeast crater.
The average amplitude of the volcanic tremor was in the range of average values. The sources of the tremor are located between the Bocca Nuova and the Southeast Crater, at an altitude between 2900 and 3000 m a.s.l..

Infrasonic activity is weak and located mainly in correspondence with the Bocca Nuova crater.
The stations of the clinometric and GNSS networks do not show any significant deformations of the ground. From the analysis and evaluation of the information obtained through the monitoring network of the Puracé volcano - Los Coconucos volcanic chain, during the week of June 7 to 13, 2022, the SGC. - Popayan Volcanological and Seismological Observatory informs us that during this week, the strong occurrence of earthquakes associated with the movement of fluids inside the volcano continues.

A total of 1,650 seismic events were analyzed, of which 51 were associated with rock fracturing processes (type VT) and 1,599 with fluid dynamics in volcanic conduits.

The sulfur dioxide emission fluxes recorded by the telemetry stations showed a stable behavior, reaching a maximum emitted of 544.25 t/day for June 12.

Degassing of the volcanic system is observed, with a white plume oriented preferentially towards the northwest.

The activity level remains at III (yellow level), which could progress to higher activity states. 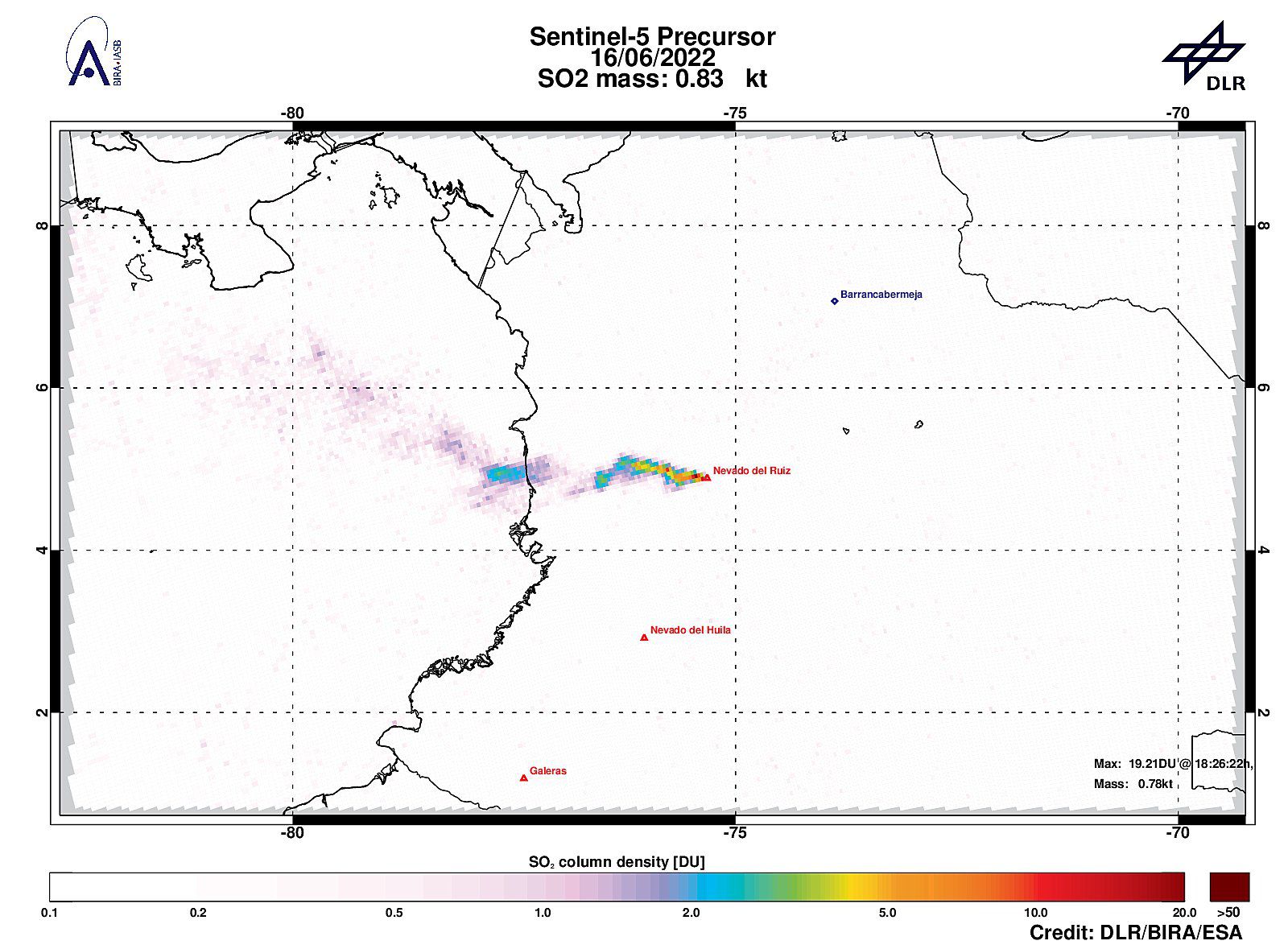 The Nevado del Ruiz continues to show instability in its behavior.
Seismicity related to fluid dynamics within volcanic conduits decreased in terms of the number of earthquakes and maintained similar levels of seismic energy released, compared to the previous week. This seismic activity was characterized by the occurrence of continuous volcanic tremors, pulses of tremors, long and very long period earthquakes. In general, these signals exhibited moderate to low energy levels, variable spectral content, and were localized primarily in Arenas Crater.

Gas and ash emissions associated with some of these seismic signals have been confirmed. Likewise, through the FLIR cameras (thermographic image cameras) of the volcanic monitoring network, changes in the relative temperature of the emitted material have been observed.

Seismicity associated with rock fracturing decreased in terms of the number of earthquakes and maintained similar levels in released seismic energy, compared to the previous week. This seismic activity was located mainly in the Arenas crater and its surroundings and, in a scattered manner, in the northeast, east-northeast, east-southeast and southeast-south sectors. The depth of the earthquakes varied between 0.6 and 6.6 km.

The recording of several episodes of drumbeat type seismicity, of low energy and of short duration, associated with the fracturing of the rocks and the seismicity of the fluids were noticed on June 06, 07 and 11, 13 and 14.
This seismicity has been linked to the processes of ascent, emplacement-growth and evolution of a lava dome at the bottom of the Arenas crater.

The deformation of the volcanic surface, measured from GNSS stations and electronic tiltmeters continued to show a stable trend.
The volcano continues to emit water vapor and gases, mainly sulfur dioxide (SO2)

The column of gas and steam reached a maximum height of 1800 m measured at the top of the volcano on June 10 and 11. The dispersion of the column was directed by the direction of the wind, which presented a predominant tendency towards the NW and the NNO of the volcano.

Last week, the MIROVA and NASAFIRMS web portals reported several thermal anomalies in the Arenas Crater, with a low level of energy.

The Nevado del Ruiz volcano continues at the Amarillo level of activity. End of the "Cities on volcanoes 11" session in Crete.

The University's Seismic Research Center (UWI SRC) has played a key role for nearly 70 years in monitoring active volcanoes in the Caribbean island arc and is well deserving of this 2022 award.

The next IAVCEI 2023 meeting will take place in New Zealand and the next Cities on Volcanoes 12 in Guatemala in 2024.

Next Cities on Volcanoes 12 in Antigua Guatemala