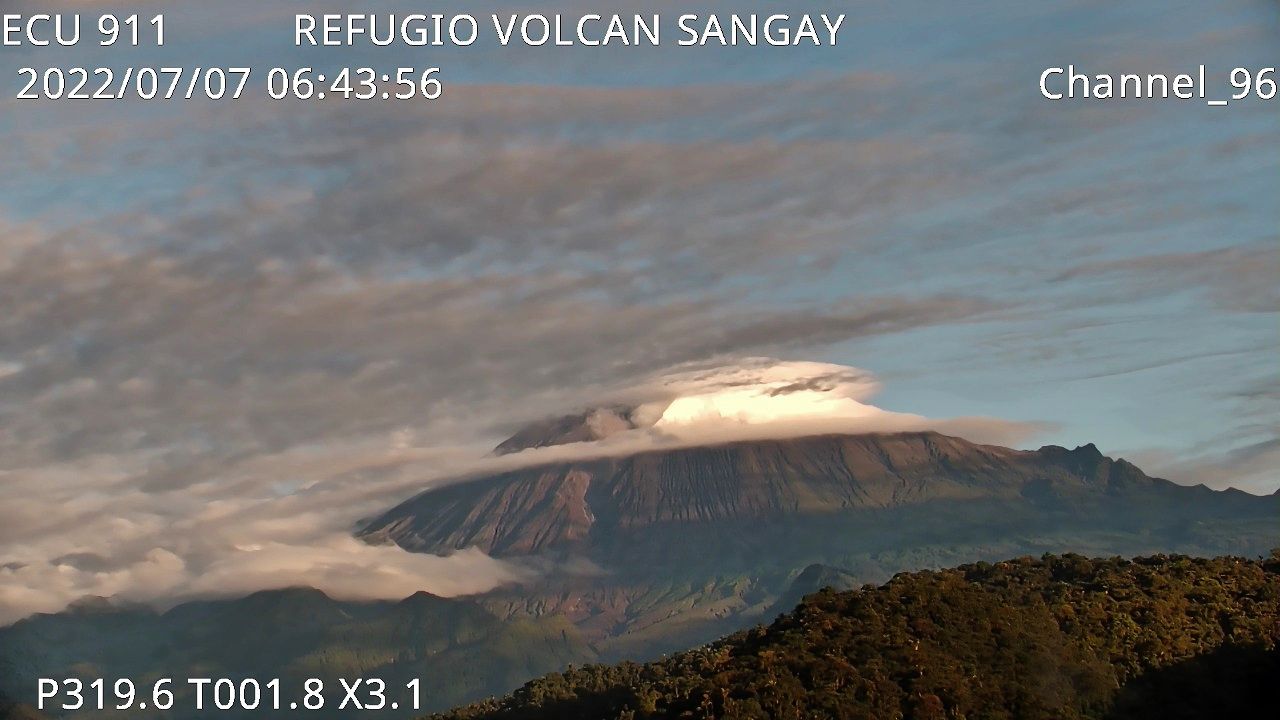 The Washington VAAC reported three ash releases with heights varying between 870 m and 1,170 m above crater level and with a westerly direction.
The FIRMS system records 65 thermal anomalies, while the MIROVA system records 1 very high (1326 MW) and 1 high (196 MW) thermal anomaly, on the southeastern flank. These anomalies continue.
Incandescent materials were observed on the southeast flank. 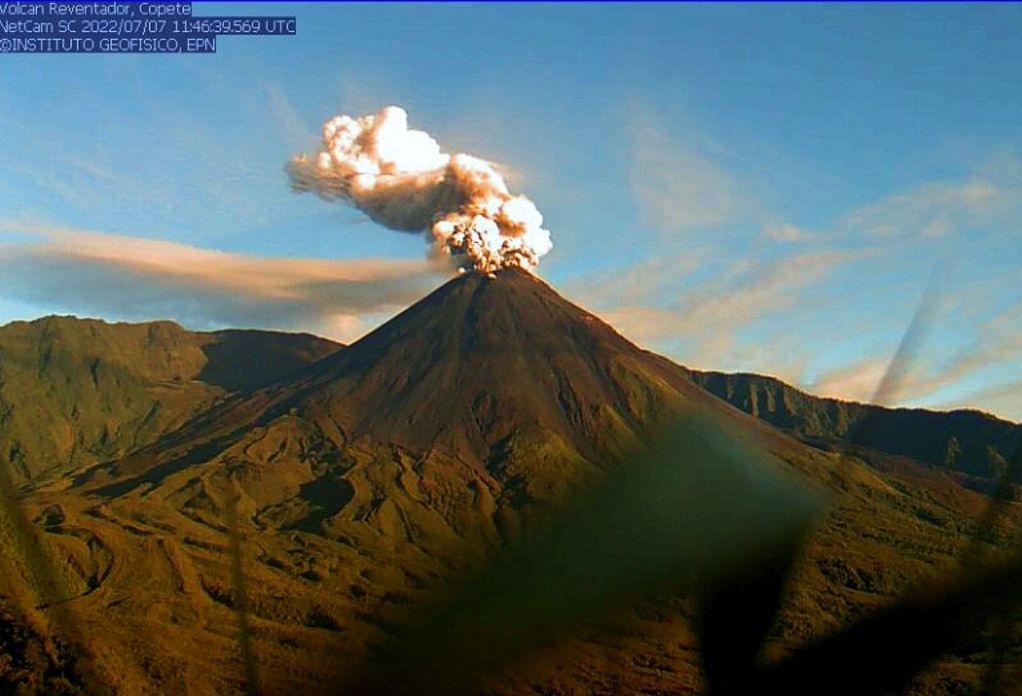 At Reventador, still in Ecuador, the IGEPN reports moderate levels of surface activity and internal activity, with no changes.

Several ash and gas emissions were observed, with heights of 500 to 800 m above the level of the crater and with a direction to the west. The Washington VAAC reported an ash emission with a height of 1338 m above crater level, with a westerly direction.

At dawn, an incandescence was observed in the upper part of the volcanic edifice, and an active lava flow in the northeast flank. The active surface of Halema'uma'u Lake, as seen during a change of view of the Kīlauea summit eruption on June 29, 2022. Lava flows from left to right in this photo, and several splash areas can be seen (the red spots in the center of the photo and along the edge of the lake). The active lake is 7 meters below the rest of the lake surface. The main part of the lake is 1 meter above the small pinched section. USGS photo by L. Gallant. - one click to enlarge

The eruption at Kīlauea Volcano's summit in Halema'uma'u Crater has continued for the past 24 hours. All recent lava activity has been confined to the crater, and current data indicates that this scenario is likely to continue. No significant changes were noted at the summit or in either fault zone.
Eruption of lava from the western Halema'uma'u vent into the active lava lake has continued over the past 24 hours. The lava level in the lake rose about 4 meters on July 6 afternoon in association with summit inflation; since then, the lava level has been stable. Nighttime webcam views showed low-level spatter at the western vent, reaching heights of no more than 10 meters above the vent. A single, relatively small lava seep was active south of the active lava lake, but no other seeps were apparent over the rest of the crater floor.

Flyby measurements from June 17, 2022 indicated that the crater floor had experienced a total elevation of about 120 meters at that time, and that 93 million cubic meters of lava had been effused since this eruption began on 29th Sep, 2021. Summit tiltmeters began tracking strong inflationary tilt early yesterday afternoon, which continues at a reduced pace this morning, much like the typical progression of a deflation-inflation (DI) event in the summit region. A sulfur dioxide (SO2) emission rate of around 720 tonnes per day (t/d) was measured yesterday, July 6, 2022.
Current volcanic alert level: Watch
Current Aviation Color Code: Orange During the last week, according to the analysis and evaluation of the parameters taken into account in the monitoring of volcanic activity, it has been shown that the Nevado del Ruiz volcano continues to exhibit behavioral instability.
Seismicity related to fluid dynamics inside volcanic conduits decreased in number of earthquakes, but increased slightly in seismic energy released, compared to the previous week. This seismic activity was characterized by the appearance of continuous volcanic tremors, tremor pulses, long and very long period earthquakes. In general, these signals exhibited moderate to low energy levels, variable spectral content, and were located primarily within Arenas Crater.
A report from Los Nevados National Natural Park officials and field staff confirmed gas and ash emissions associated with some of these seismic signals.

The seismicity associated with rock fracturing maintained similar levels in terms of the number of earthquakes, although it showed an increase in the level of seismic energy released, compared to the previous week.
This seismic activity was located mainly to the southwest of the volcanic edifice, on the border with the Paramillo del Cisne volcano, and to a lesser extent in the Arenas crater and in the northeast and northwest sectors. The depth of the earthquakes varied between 0.5 and 6 km. The maximum magnitude recorded during the week was 1.0 ML (local magnitude), corresponding to the earthquake that occurred on July 3 at 09:03 (local time), located 4.8 km southwest of the Arenas crater, at a depth of 3.8 km. The source of the southwestern sector continued to be active during the week and the event of maximum magnitude was recorded in this area.

Likewise, through the FLIR cameras (thermographic cameras) of the volcanic monitoring network, changes in the relative temperature of the emitted material have been observed. Registration of new signals is not rejected
seismic events of this type that may be associated with emissions of gas and ash, which will be dispersed depending on the prevailing wind regime at the time of emission.

The deformation of the volcanic surface, measured from GNSS (Global Navigation Satellite System) stations and electronic inclinometers, continued to show a stable trend.
The volcano continues to emit water vapor and gases, mainly sulfur dioxide (SO2). Emission levels were estimated from data obtained from Scandoas stations and satellite image processing. While monitoring the volcano's thermal activity, over the past week the MIROVA and NASAFIRMS web portals have reported low-energy thermal anomalies.
The column of gas and steam reached a maximum height of 1889 m measured at the top of the volcano on July 2. The dispersion of the column was governed by the direction of the wind, which showed a predominant tendency towards the western side of the volcanic edifice.
The Nevado del Ruiz volcano continues at the Amarillo level of activity. Phenomena such as swarms of earthquakes, some of which are felt, ash emissions, lahars, morphological changes, noises and smells of volcanic gases, among others, can occur at this level, which can alter the quality of life of the populations of the volcanic influence zone. Although the instability of the volcano has lasted for more than eleven years, it is essential not to get used to its behavior and to be attentive to official information published by the Colombian Geological Service. The authorities of the departments of Caldas, Tolima, Risaralda, Quindío and Cundinamarca are invited to take extreme measures focused on knowledge and risk reduction processes, as well as disaster management as preparedness measures for the future activity of the volcano Nevada del Ruiz.