A chance encounter: director Sara Dosa was looking for footage of erupting Icelandic volcanoes, and she stumbles upon the spectacular photos and films of Maurice and Katia Krafft.

She immersed herself with her producer, Ina Fichman, in the archives of volcanologists who died at Unzen, kept at Images'Est in Nancy.

The focus was on the material left by the Krafft spouses

“Through our research and our conversations, we understood that they were living the life they dreamed of living, a life full of meaning and love. They knew that they could die at any moment doing this type of work. It's not that they wanted to die, but they had made peace with this idea. It's not about celebrating their death, but celebrating their life," Sara told La Presse/Canada. A trio of lovers - image from the film

" It was when we really learned who they were as people, and the fact that they were not only married but also in love with volcanoes, that we were like, 'OK, we want to make a movie about these people." , said Sara Dosa to AFP.

Volcanoes, " that's what brought them together in the first place, and it was the engine, the fuel of their relationship ".

" Fire of love ", this documentary from National Geographic and the prestigious independent distributor Neon is the subject of rave reviews and first awards. It was also screened in a limited number of US theaters.

In the original English version, the director chose not to dub Katia and Maurice Krafft, who speak mainly French, and opted for subtitles.

The French version also uses subtitles rather than dubbing for narration, performed by filmmaker Miranda July.

- Overblog / Earth of fire: These photographers who enchant us ... Katia and Maurice Krafft - link 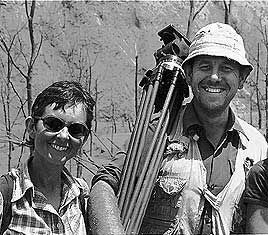