GeoEye-1 satellite image of the lava flow field within the summit crater and upper flanks of Great Sitkin Volcano July 6, 2022. Lava eruption continued at a slow rate from a vent in the center of the summit crater. The flow field developed northeastward into the summit glacier, which is collapsing (see concentric curved crevasses) due to melting due to interacting lava. - Doctor. AVO / Dietterich, Hannah - one click to enlarge

The slow eruption of lava from the summit crater of Great Sitkin Volcano continued this week. Weakly elevated surface temperatures were observed at the summit in satellite data on most days when the volcano was not obscured by clouds. Seismic activity remains weak with occasional small local earthquakes detected throughout the week. Satellite radar observations showed a thickening of the lava flow around the vent, but no significant change in the length of the lava flows.

The terrain is steep near the terminus of the lava flow lobes, and blocks of lava could break off without warning and form small rock avalanches in these valleys. These avalanches can release ash and gas and travel several hundred meters beyond the lava flows; they would be dangerous to anyone in those areas.

The volcanic alert is on Watch, and the aviation code is orange. The Kilauea volcano is erupting.

Over the past week, lava has continued to erupt from the western vent of Halema'uma'u Crater. All lava is confined within Halema'uma'u Crater in Hawai'i Volcanoes National Park. Sulfur dioxide emission rates remain high and were last measured at around 1,300 tonnes per day (tpd) on July 11. Seismicity is high but stable, with few earthquakes and ongoing volcanic tremors. Over the past week, summit tiltmeters have recorded deflation from July 9-11 and relatively little deformation since then. Mauna Loa is not erupting.

Last week, about 87 low-magnitude earthquakes were recorded below the summit and upper flanks of Mauna Loa, the majority of them occurring at depths less than 15 km (9 mi) below the level of the sea. GPS measurements show low rates of ground deformation over the past week. Gas concentrations and fumarole temperatures at the summit and at Sulfur Cone on the southwest rift zone have remained stable over the past week. The webcams show no change in the landscape.

The aviation code is yellow. 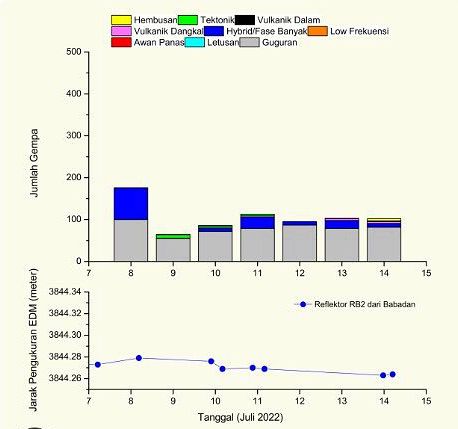 Between July 8 and July 14, 2022, 43 lava avalanches were observed southwest of the Merapi, dominant up to the Bebeng River with a maximum slip distance of 2,000 m. In the southwest dome, there is no change in the height of the dome. For the middle dome, no significant morphological change was observed. At Semeru, on Java, the seismicity of July 15 is characterized by:

The level of activity remains 3 / siaga, with recommendations:
- to carry out no activity in the southeastern sector along Besuk Kobokan, up to 13 km from the summit (the center of the eruption). Outside of this distance, the community does not conduct activities within 500 meters of the bank (river edge) along Besuk Kobokan due to the potential for expansion from hot clouds and lava flows. at a distance of 17 km from the summit.
- not to move within a radius of 5 km from the crater / summit of Mount Semeru because it is subject to the danger of stone throwing (incandescent).
- to remain aware of the potential for hot cloud avalanches (APG), lava avalanches and lahars along the rivers/valleys that originate at the summit of Mount Semeru, especially along Besuk Kobokan, Besuk Bang, Besuk Kembar and Besuk Sat as well as potential lahars in the rivers a small river which is a tributary of Besuk Kobokan.