The INGV Etneo observatory reports that Stromboli monitoring networks recorded an overflow of lava from the northern area of ​​the crater from 17:30 UTC / 19:30 local.

Note that from 17:04 UTC today (19:04 Local), the monitoring network of the Laboratory of Experimental Geophysics / LGS - Department of Earth Sciences of the University of Florence UNIFI highlights a small overflow of lava from the Central Crater area, accompanied by a modest increase in tremor and weak ground deflation.
There are currently no other changes in the monitored parameters.
The explosive activity is currently normal and the activity index remains at the average level. Heavy rainfall on the volcanic complex Santa María-Santiaguito is currently generating the descent of lahars into the Cabello de Ángel river, a tributary of the Nimá I and Samalá rivers, to the south-southwest of the volcano.

This lahar is weak in character, carrying a pasty mixture of water, boulders up to 1 meter in diameter, and finer sediments, as well as tree trunks and branches. The lahar on its way produces vibrations in the ground which are recorded in the seismic stations close to the bed of the river, in this case the STG3. The lahar may increase its intensity from weak to moderate in the next few minutes and, if these rainy conditions persist in the region, the possibility of lahars descending in one of the channels that emerge from the volcanic complex is not excluded. 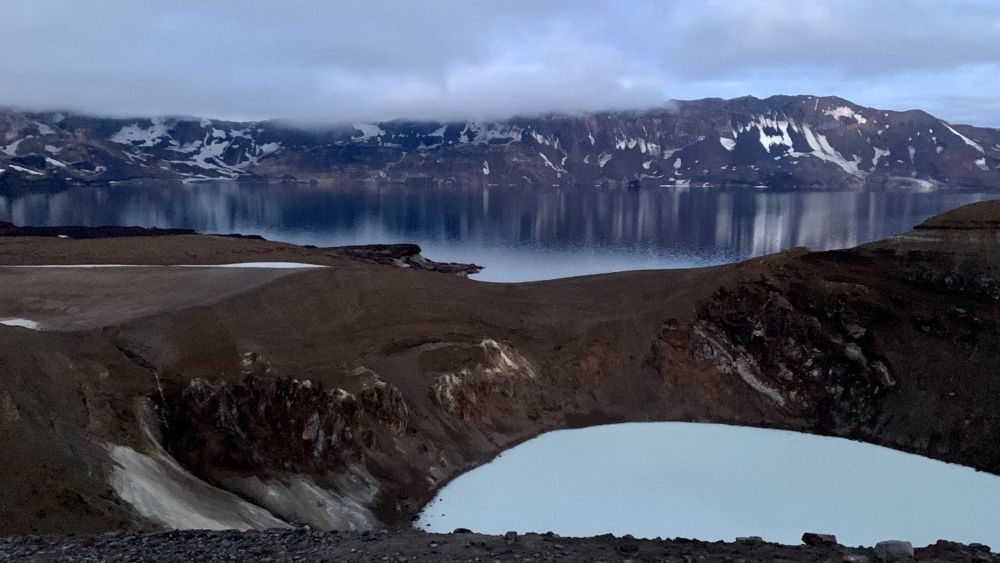 The interferogram shows surface displacements at Askja over the past 12 months - the colored fringes displayed in the Askja caldera represent inflation related to a shallow magma intrusion that began in early August 2021. OLAC GNSS station is represented by the black triangle. Approximately 35 cm of inflation has been measured at this site over the past 12 months. - Doctor. IMO / Sentinel

A meeting was held with scientists from the Icelandic Met Office, the Institute of Earth Sciences and the Department of Civil Protection and Emergency Management to monitor the state of the unrest in Askja. Since August 2021, an uplift of 35 cm centered west of Lake Askja has been measured.

The uplift is most likely due to pressure at the root of the volcano caused by magma intrusion which has been modeled at around 2 km depth. The uplift is rapid compared to other similar volcanoes around the world. However, an increase in seismic activity was not detected. Subsidence over the past decades at Askja may account for the low seismicity in addition to partially silent (aseismic) movement on caldera faults.

The possible scenarios are still as previously reported. If magma buildup continues, uplift may continue for some time without an eruption. Seismic activity is most likely the most significant indicator of escalating activity and an impending eruption. The most likely scenario if there will be an eruption is a fissure eruption near the crater. Observations of similar volcanoes show that considerable deformation and uplift of more than 1 m. can occur without an eruption. However, it cannot be ruled out that an eruption at Askja could occur with only a few hours notice.

Iceland's Civil Protection Department has its level of uncertainty alert in Askja and will continue to monitor the area closely with IMO, the police and Vatnajökull National Park.

Since early May 2022, the seismic monitoring network has recorded an increase in seismic activity beneath Lake Taupō. While Lake Taupō sits above Taupō Volcano, recent earthquakes are not considered an indicator that an eruption is on the way. This activity is similar to recent periods of elevated seismic activity and ground deformation measured in 2008-2009 and 2019. The Volcanic Alert Level for the Taupō Volcanic Center remains at Level 0.

Agnès Mazot, a volcanologist of Belgian origin working at GeoNet, explains the situation:

"Research and monitoring of the Taupō Volcanic Center has improved our understanding of this volcano. We believe that Taupō's earthquakes and uplift/subsidence are the result of a mixture of regional deformation processes and the magmatic system under the volcano.

Analysis of 2008-2009 activity indicated that Taupō volcano's behavior was influenced by a slow slip event over the Hikurangi subduction zone to the east. Some aspects of the seismic activity and ground deformation were thought to be triggered by the slow slip event, while others stemmed from volcanic processes.

The 2019 earthquake swarm was studied by researchers from the ECLIPSE project. This study showed that the earthquakes were related to the margins of a relatively solid magma slurry zone beneath the volcano. Magma slush areas, such as the one identified under Taupō, are an area of ​​nearly solid magma that contains small puddles of melt (liquid magma).

It is unclear whether the ongoing earthquakes and uplift are related to regional deformation and/or magma movement. A slow slip event is currently occurring on the Hikurangi subduction zone. However, the absence of significant ground deformation probably rules out the involvement of large-scale magma. We believe the 2022 earthquakes are similar to those of 2008-2009 and 2019, and this has helped inform our view that Volcanic Alert Level 0 is currently appropriate for Taupō Volcano.

Changes in the background activity of caldera volcanoes like Taupō are very common. There have been 16 episodes of unrest in Taupō over the past 140 years, all of which have subsided again. Taupō is an active volcano and earthquakes, and uplift or subsidence will continue to occur in the future. GNS Science, through the GeoNet program, is continuously monitoring Taupō and our other active volcanoes for signs of activity."