Meradalur - the crescent cone on the main vent on 10.08.2022 around noon - RUV Langholl live webcam screenshot - one click to enlarge

A nice crescent-shaped crater has piled up around the largest fissure geyser in Meradalur.

The wall has grown a lot in the fog that has covered the area in recent days.

It should be noted that the circumference of the crater is not circular around the vent, as usual, but only piled up on the east side of the crater. Three vents are currently producing lava, and the main one is spattering up to a hundred meters high.

The most likely explanation is that the lava pond that formed in the valley basin blocks the entire structure of the crater basin to the west of it (closer to the camera). Anything that falls from the jets on this side falls directly into the flowing lava pond and nothing can accumulate there. 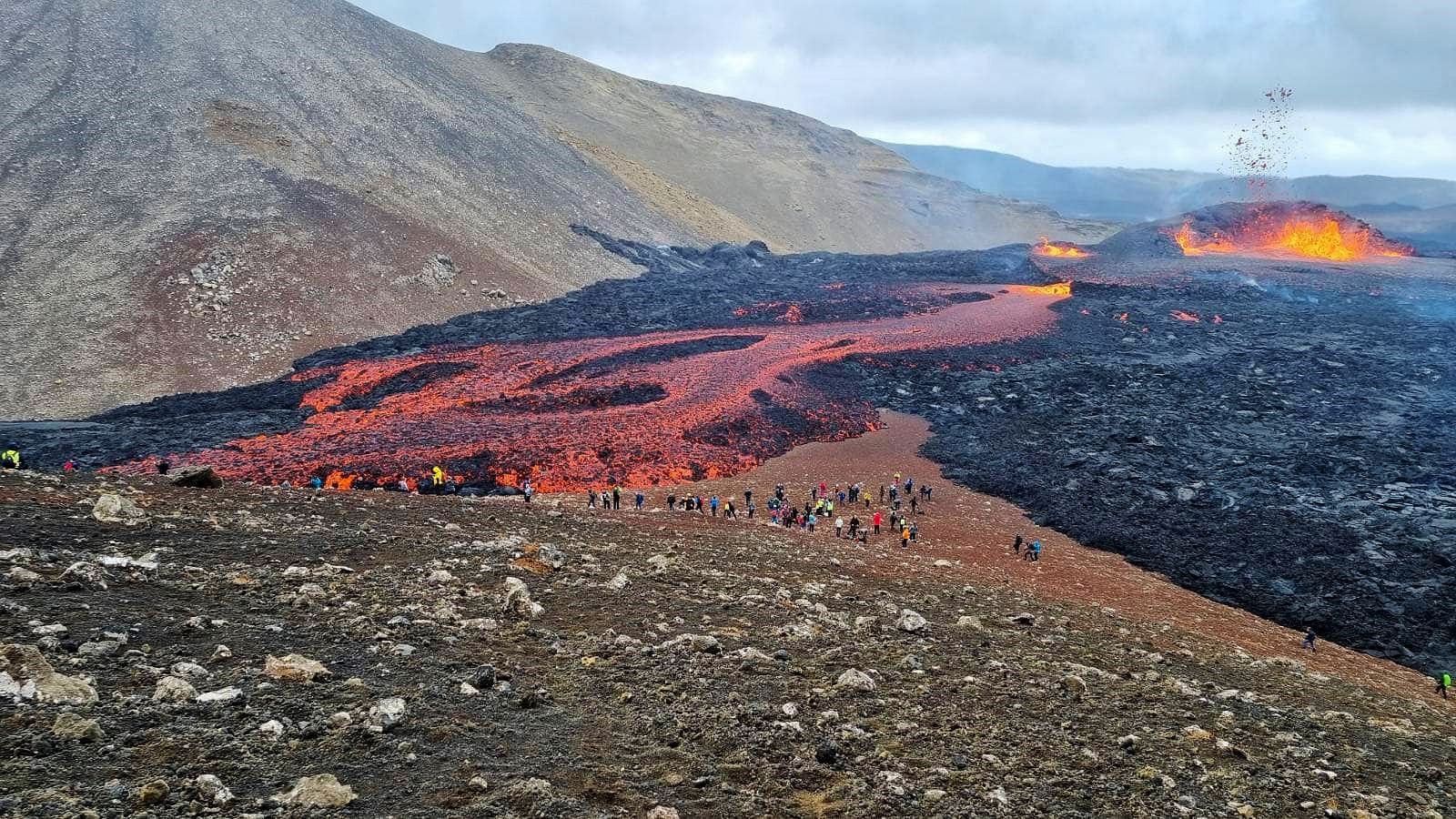 Meradalur - height of the lava fountain forming the crescent cone and the overflow flows - photo 10.08.2022 Almannavarnadeild ríkislögreglustjóra - one click to enlarge The University of Iceland's Volcanology and Natural Hazards Group visited the eruption sites on the morning of August 10 and is working there. Upon examination, it became clear that the Merardalur lava rose several meters at the lowest pass of the valleys. There is only about 1 m left. before the lava starts to come out of the valleys.

The lava flow is about to pass over the lowest pass of Merardalur. With the same lava flow in the lava flow, it could pass today or tomorrow. 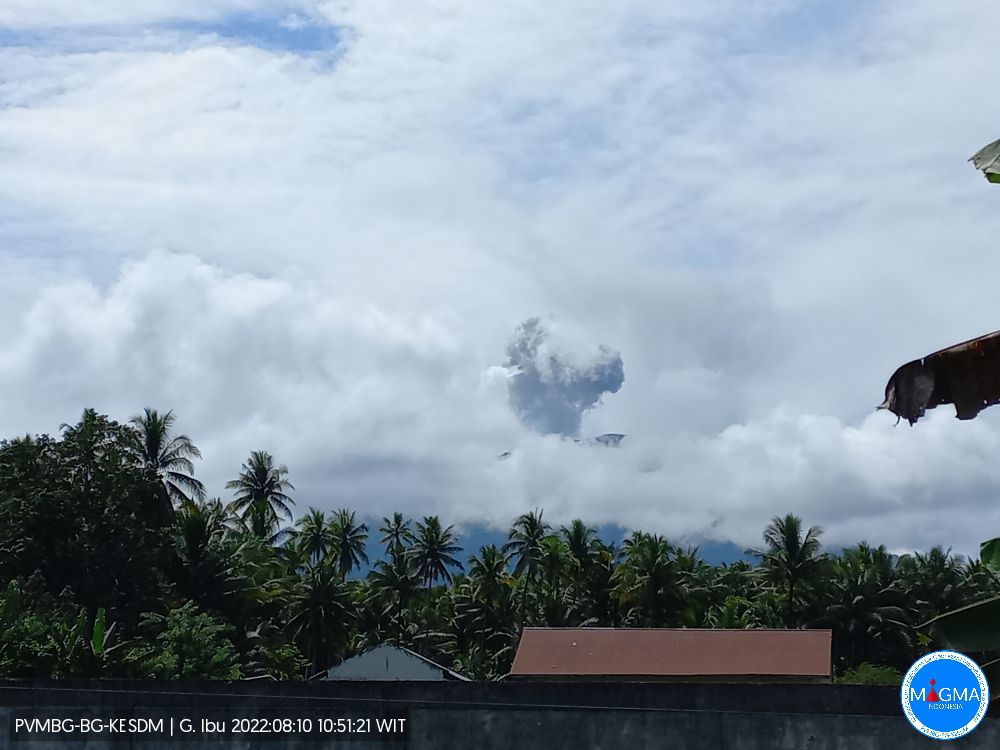 Gunung Ibu experienced an eruptive episode on Wednesday August 10, 2022 at 10:47 a.m. WIT with the height of the ash column observed at ± 600 m above the summit (± 1925 m above sea level). It is observed that the ash column is gray in color with a thick intensity to the southwest and west. This eruption was recorded on a seismograph with a maximum amplitude of 26 mm and a duration of 60 seconds.
Recommendation

Communities around Mount Ibu and visitors/tourists should not travel within 2.0 km and the sectoral expansion is 3.5 km towards the crater opening in the northern part of the active crater of Mount Ibu. The Sentinel-2 satellite imaged a thermal anomaly on August 10 at Nyamuragira / DRC. The Mirova site reports for the last three days various thermal anomalies, between VRP 7 MW and VRP 79 MW.

Since mid-2013, activity at Nyamulagira has been characterized by the intermittent presence of a lava lake/effusive eruption in the caldera, as stated by Charles Balagizi of the Goma Observatory.

According to the Global Volcanism Program, the current eruptive period runs from April 18, 2018, and continues to this day. 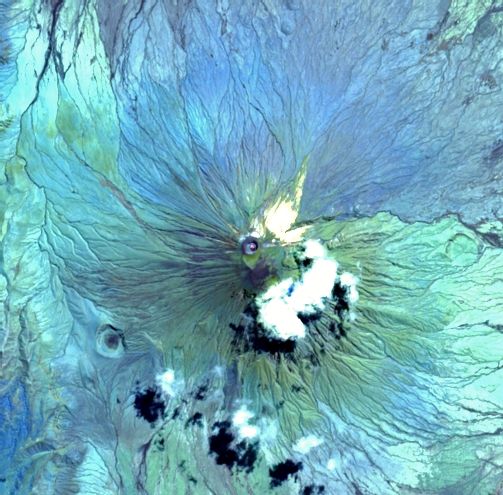 Ol Doinyo Lengai, also known as "The Mountain of God" by the Maasai, is the only known volcano in historical times for its carbonatite eruptions.

This symmetrical stratovolcano dominates the plain near Lake Natron, in the Gregory Rift Valley.

The depth and morphology of its northern crater has changed over eruptions, ranging from steep crater walls about 200 m deep in the mid-20th century to shallow platforms mostly infilling the crater. Long-term lava effusion into the summit crater beginning in 1983 had, by the turn of the century, primarily filled the north crater; by late 1998, lava had begun to overflow the crater rim. In 2007, an explosive period again deepened the crater, the floor of which has been gradually rising since 2011.

The current eruptive period dates from April 9, 2017 and continues today, as confirmed by the Sentinel-2 image from August 6 and the field photo from this August. 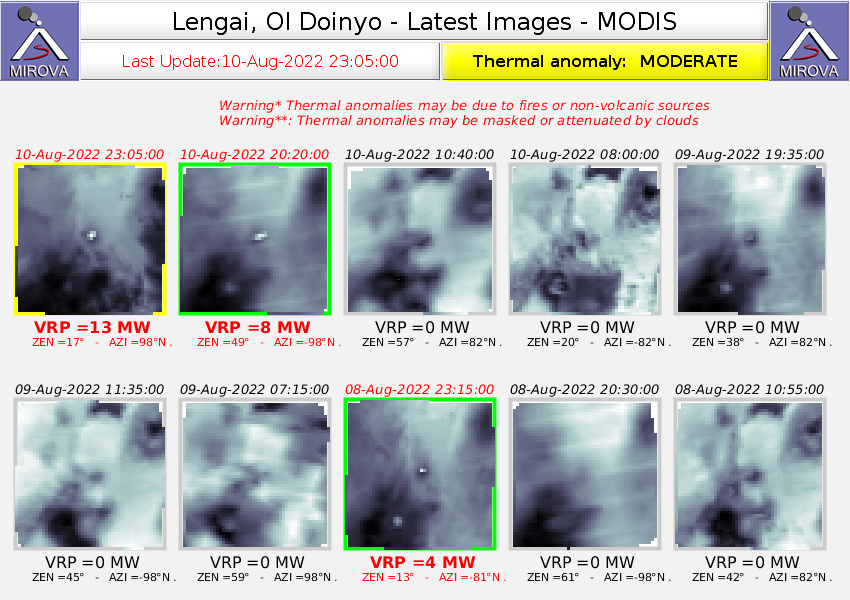 Ol Doinyo Lengai - the hornitos stuck in the crater on the floor covered with different flows in August 2022 - Doc. Claudio Jung -photo Janko Jackelj - one click to enlarge