This August 12 at 8:00 p.m. local time, the IGEPN announces an increase in the internal and superficial activity of the Sangay volcano.

From 10:00 TL, an increase in seismic energy was recorded, which resulted in the emission of a new lava flow, sounds heard in Guayaquil and ash falls in the province of Chimborazo and possibly in Guayas. Due to the good weather conditions, the sounds and the ash emission had higher than normal ranges. This pulse of activity is distinguished by the emission of a large lava flow which was observed with satellite images and the ECU-911 camera. From 13:00 TL, through satellite images (GOES-16), an ash cloud is observed which reaches less than 2 km above the crater and heads west. Passive degassing has continued at Turrialba without eruptive activity since August 11, 2022.

A fumarolic incandescence is observed in the crater. Seismicity is maintained with frequent low frequency, low amplitude events. Geodetic monitoring demonstrates a horizontal contraction of the volcanic edifice.

Seismic activity remained stable on August 12, with around 100 daily events and a downward trend. The deformation pattern continues with the contraction and subsidence of the Irazú-Turrialba massif, more marked around the Turrialba crater.

SO2 has not been detected by satellite since the end of June, the apparent concentration of SO2 remains stable.

The active crater has only been visible for a short time these days, often shrouded in fog.

The activity level is 2 – Warning. According to I.G.Peru, an anomalous seismic swarm was detected on August 13, 2022 at Ticsani.

More than 412 earthquakes of magnitude less than M3.2, associated with the rupture of rocks, were located 4.5 km south of the recent dome of Ticsani, and a depth of 12 km from the level of the crater. Slight gas emissions are visible on the webcam. 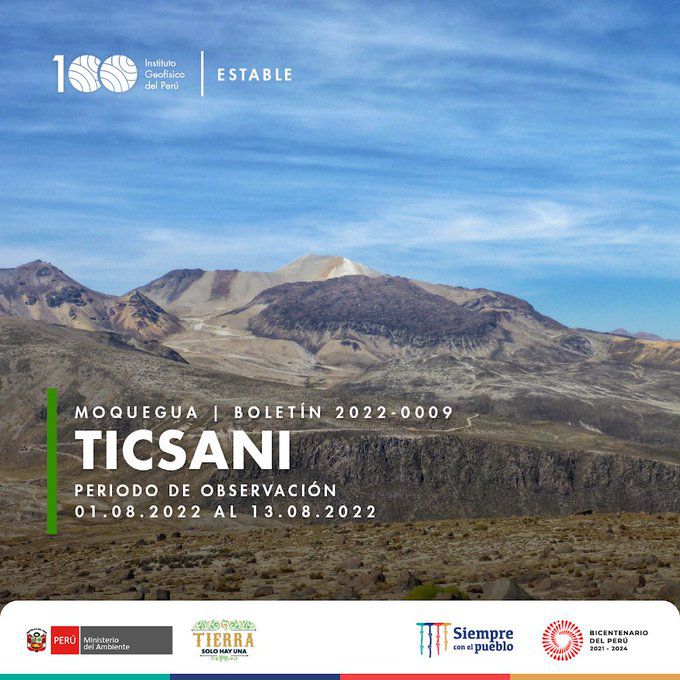 Eruptive activity waned between 6:30 a.m. and 7:30 a.m. on August 13 at Meradalur, but resumed approximately a little later.
Volcanologists and geophysicists from the Icelandic Meteorological Office are set to investigate whether this can lead to new cracks forming. The same situation occurred during the 2021 eruption, as a sharp drop in activity preceded the opening of new eruptive vents.
The lava flow has not yet escaped Meradalir Valley, but it should happen soon. Meanwhile, the lava continues to travel north.

The lava flows randomly, mainly in the vicinity of the crater, mainly to the west and north, explains Kristín Jónsdóttir.
But currently it's not possible for scientists to say whether lava will overflow the valley "tomorrow or within a week" ...a plan to divert lava from fiber optic cables via diversion dams is in the study.
About the main cone, the only one remaining active on the fissure, it soon appears to form a typical cone, with a pool of lava inside reminiscent of a small cauldron of boiling lava.
The weather at the eruption site was favorable today, but from a volcanic hazard perspective, gas emissions may accumulate in the valleys.