After warnings from IMO, Lava Center and Safe Travel regarding the bad weather conditions of 07 August on the road and the eruption site of Meradalur, yesterday at 18:34, the police chief of Suðurnes therefore decided that the Merardalur eruption area will be closed to public access from 05:00 this Sunday, and the situation will be reassessed on Sunday afternoon. The media will be informed of the future once the situation has been reassessed. (Lögreglan to Suðurnesjum) The eruption continues at Meradalur.

Regarding the dispersion of sulfur dioxide: according to data from Sentinel-5P Tropomi, the plume drifts east from the eruptive site, then goes up the west coast of Iceland on the Reykjanes peninsula and Reykjavik on August 6 . (via Prof. S. Carn)

During the risk assessment due to a volcanic eruption at Fagridalsfjall, a lava flow model was made which expects a fissure on similar pathways as it erupts. This model expects a flux similar to that measured now. The map below shows the lava distribution if the eruption remains unchanged for 200 days. It should be noted that it is not clearly mentioned if the strength of the eruption and the location will remain unchanged during all this time. Based on the information available today, however, the probability shows that this eruption is not considered likely to threaten significant infrastructure. Meradalur - distribution of lava if the eruption remains unchanged for 200 days - Doc. IMO 08.2022 - one click to enlarge

Let's take advantage of this forced truce to take an interest in the scientists who practice measurements and process them.

Lava mapping is a collaborative project of many parties: in Iceland this is primarily the University Institute of Earth Sciences, the Icelandic Institute of Natural Sciences and the Land Survey of Iceland. The Meteorological Office, Ísavia and Almannavarni are also involved. Aerial photos are taken from Garðaflug's plane or from Reykjavík's Fisfélag plane. French colleagues are also involved because access to the Pléiades satellite was obtained via CIEST2, a French research project.

Geochemistry is mainly done at the University's Institute of Geosciences. The gas measurements are carried out by experts from the Norwegian Meteorological Agency and people from the Geoscience Foundation.

A large group of experts from the above-mentioned institutes, technical staff from the laboratories and postdoctoral fellows from the Institute of Geosciences will therefore be involved in the work.

A mention also concerning the human protection and the management of the site for the personnel and volunteers of the Suðurnes Police, the Þorbjörn rescue team, and the Civil Security. - Suwanosejima on August 7, where the JMA noted at 00:12 an explosion, accompanied by a plume of ash and gas at 1,700 meters, and another, with a plume more than 2,000 meters above the crater. The eruptive columns are reported rising straight above the crater. - On Sakurajima, August 7, with a moderate volcanic plume, 1,300 meters above the crater, flowing southeast. 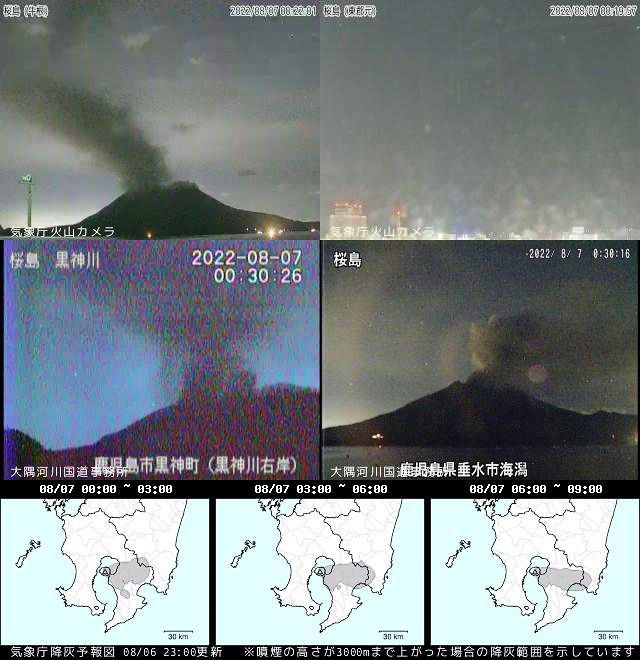 The volcanoes of Hawaii continue to be studied by the volcanological observatory in these months of July to August 2022.

The recent Sentinel-1 interferogram for the period June 7 to July 13, 2022 covering the island of Hawai'i reveals the ground deformations. Each colored band represents 2.83 centimeters of displacement on the ground. There is evidence of a few millimeters of inflation at Mauna Loa, and no noticeable deformation at Kīlauea during this time. In addition to ground deformation, this interferogram captures significant atmospheric noise. Copernicus Sentinel data was provided by the European Space Agency.

For more information regarding InSAR and interferograms for Hawaiian volcanoes, please read: https://www.usgs.gov/news/volcano-watch-reading-rainbow-how-interpret-i…. Airborne electromagnetic and magnetic (AEM) survey in the Kīlauea caldera on July 28, 2022.

During the investigation, a helicopter flew about 150 feet above the ground, carrying a hoop 40 feet in diameter suspended 35 feet below. The system transmits weak low-frequency radio waves into the ground, measures the Earth's response, and passively detects changes in the Earth's magnetic field. These variations will allow scientists to create a picture of the shallow (upper 600 meters) magmatic structure, fault systems, and subterranean waterways beneath Kīlauea's surface. The Kīlauea volcano is erupting. Its USGS Volcanic Alert Level is at WATCH.

Sulfur dioxide emission rates remain high and were last measured at around 1,900 tonnes per day (tpd) on August 1.

Seismicity is high but stable, with few earthquakes and ongoing volcanic tremors.

Over the past week, summit tiltmeters have recorded two deflation-inflation sequences. Kilauea / Halema'uma'u - the surface of the lake is composed of large crustal plates separated by incandescent spreading areas, with spattering along the eastern margin. The lake and the surrounding crater floor, formed of solidified lava, are gradually being uplifted due to the supply of endogenous lava below the surface. USGS photo by M. Patrick / 04.08.2022 - one click to enlarge