There have been some changes to the Meradalur eruption site over the past 24 hours. The number of vents has decreased since the start of the three-vent eruption, but the power of each vent seems to have only increased... the jets reach a height well over 100 m...

There is evidence that some sort of pulsating activity began in the larger crater. For the most part, the geysers remain inside the crater rim that has risen, but between the two, jets of lava erupt that rise several times higher than the other geysers. Based on the fall time of the lava spatter, it can be roughly estimated that most jets reach a height of well over 100 meters.
At the same time, the lava river flowed eastward into Meradalur continuously for several days, pumping large amounts of lava over the lava from the previous eruption. Fagradalsfjall station - tremor at 07.08.2022 (note the change during the eruption) - Doc. Hraun.vedur.is

A decision has been made that the area of ​​the eruptive site will remain closed and that the situation will be reassessed after a meeting tomorrow morning, Monday August 8th. This is stated in an announcement from the Suðurnes police.

The eruption site was closed Sunday, August 7, due to inclement weather and winter conditions on the trail. The situation will be reassessed after a status meeting early tomorrow Monday August 8th. View of the eruptive site 2021-2022 - Doc. National Land Survey of Iceland - comments below - one click to enlarge thumbnails

The National Land Survey of Iceland (http://lmi.is) map has been updated with a recent aerial view of the eruption site.

Last year's crater is on the left, the new fault is visible near the upper center. The black spot on the right is the shadow of the gas coming out of the volcano.

Seismicity decreases overall; yet a magnitude 4 earthquake, just west of Kleifarvatn, was felt as far away as Reykjavik yesterday. Presumably an adjustment on the cracks. Following a warning from Phivolcs on August 7 at 11:30 p.m. local time, Taal's main crater emitted a total of 17,141 tons of sulfur dioxide per day.

Gases move from east to west.

The increase is accompanied by an upwelling of water from the crater lake and a voluminous plume rich in steam during the previous three days, which can rise to 1,500 meters.

Three episodes of tremor, lasting 4-12 minutes, were recorded during this same observation period. Volcanic smog or vog was also observed on August 2-3 over the western Taal Caldera and was reportedly heavy over the town proper of Laurel and Banyaga, Agoncillo, Batangas Province, where vegetation damage also occurred. been documented by municipal officials.

The alert remains at level 1, with a ban on entering Taal volcano island and the Daang Kastila fissure, and on boating on Taal Lake. Overflight close to the volcano is also forbidden. 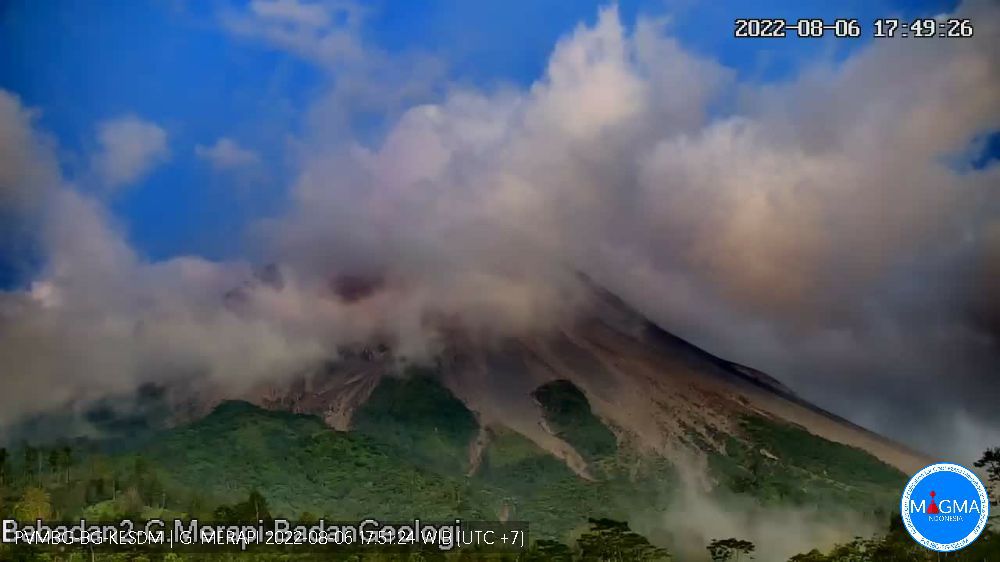 The Merapi was clearly visible on August 7, 2022, until it was covered by fog 0-III. Observable fumaroles from the main crater were white, with low to moderate intensity about 20-30 meters from the summit.

The activity level remains at 3 / siaga, with recommendations:
Current potential hazards are lava avalanches and hot clouds in the south-southwest sector covering Boyong River for up to 5 km, Bedog River, Krasak, Bebeng for up to 7 km. The southeastern sector covers the Woro River for a maximum of 3 km and the Gendol River for 5 km. Meanwhile, the ejection of volcanic material in the event of an explosive eruption can reach a radius of 3 km from the summit.