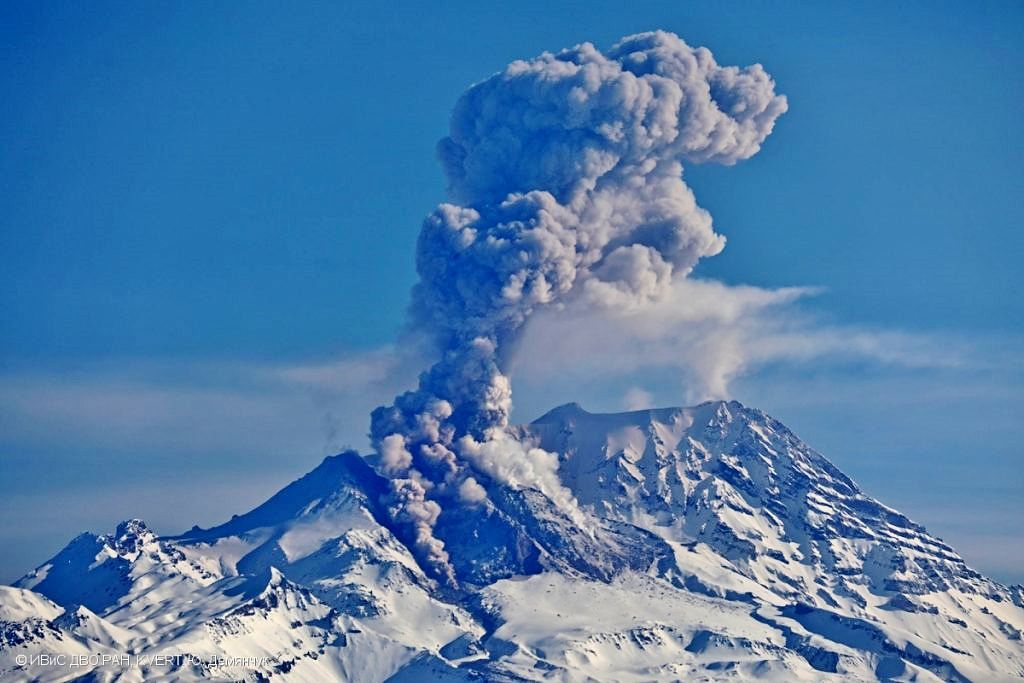 Satellite data from KVERT showed high thermal anomaly over the volcano (between 6 and 319 MW).

A gas-steam plume containing some ash extended 80 km to the east and southeast of the volcano. The observatory of the Santa María-Santiaguito volcanic complex reports fumaroles with moderate degassing at low altitude above the Caliente dome, as well as suspended ash in the vicinity of the volcanic complex.

Avalanches were observed on the western flank of the Caliente dome, as well as constant collapses in front of the active lava flow in the San Isidro and El Tambor channels. These collapses generate loud sounds due to the fall of rock blocks and raise columns of ash up to 1,000 meters high, which are moved by the wind and generate ash falls on the areas surrounding La Florida, Monte Claro, San Marcos Palajunoj and Beautiful hill.

It is recommended not to approach the lava flow, due to the intense heat it emits and the constant collapses that occur on its edges, which could cause burns and other serious injuries to those who come close. The extrusive activity remains at a high level and continues to accumulate material in an unstable way in the lava flow in the channels of San Isidro and El Tambor, as well as in the dome of the Caliente dome, so it remains possible that some of these material collapses and long-range pyroclastic flows are generated to the southwest, south and east. 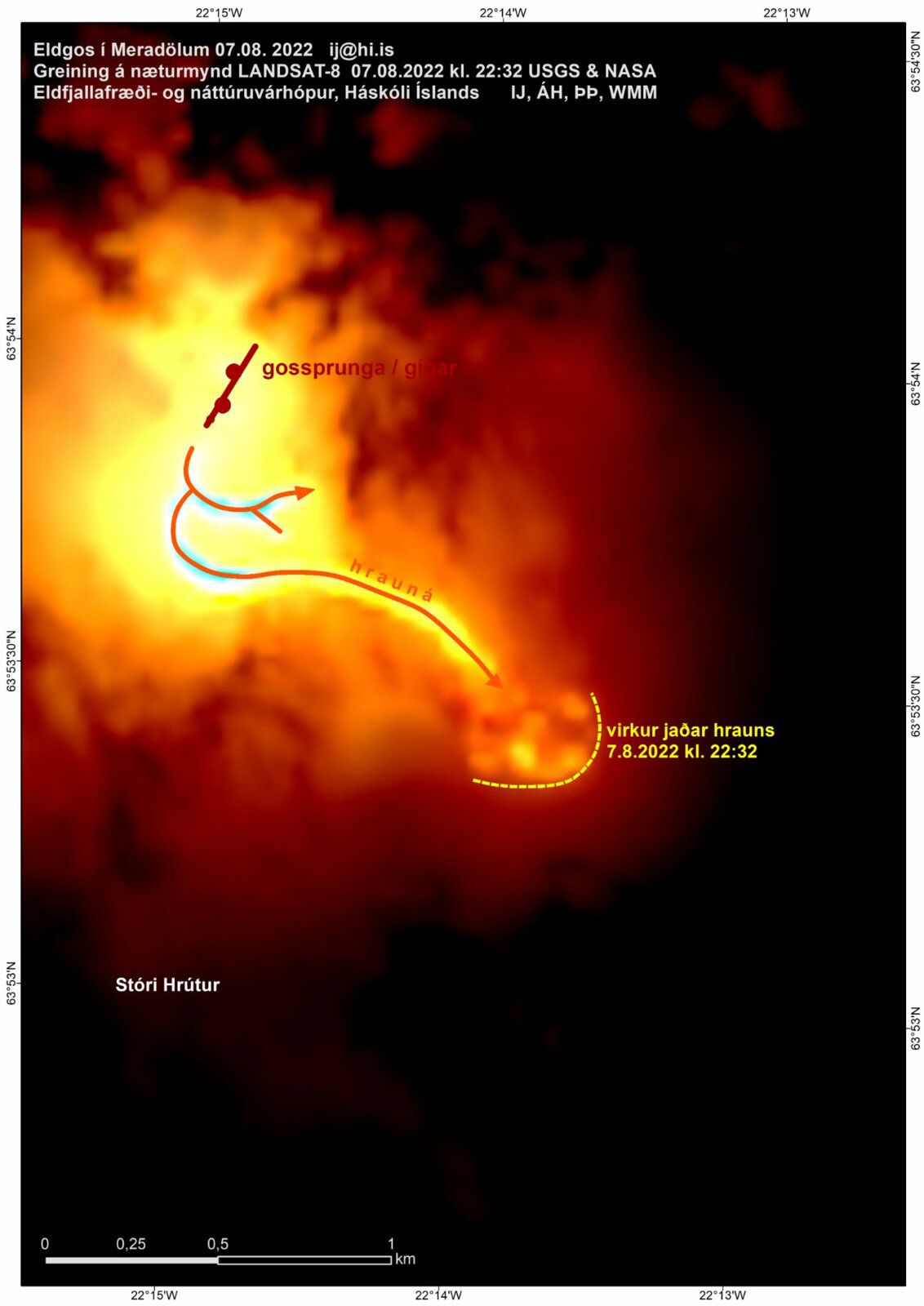 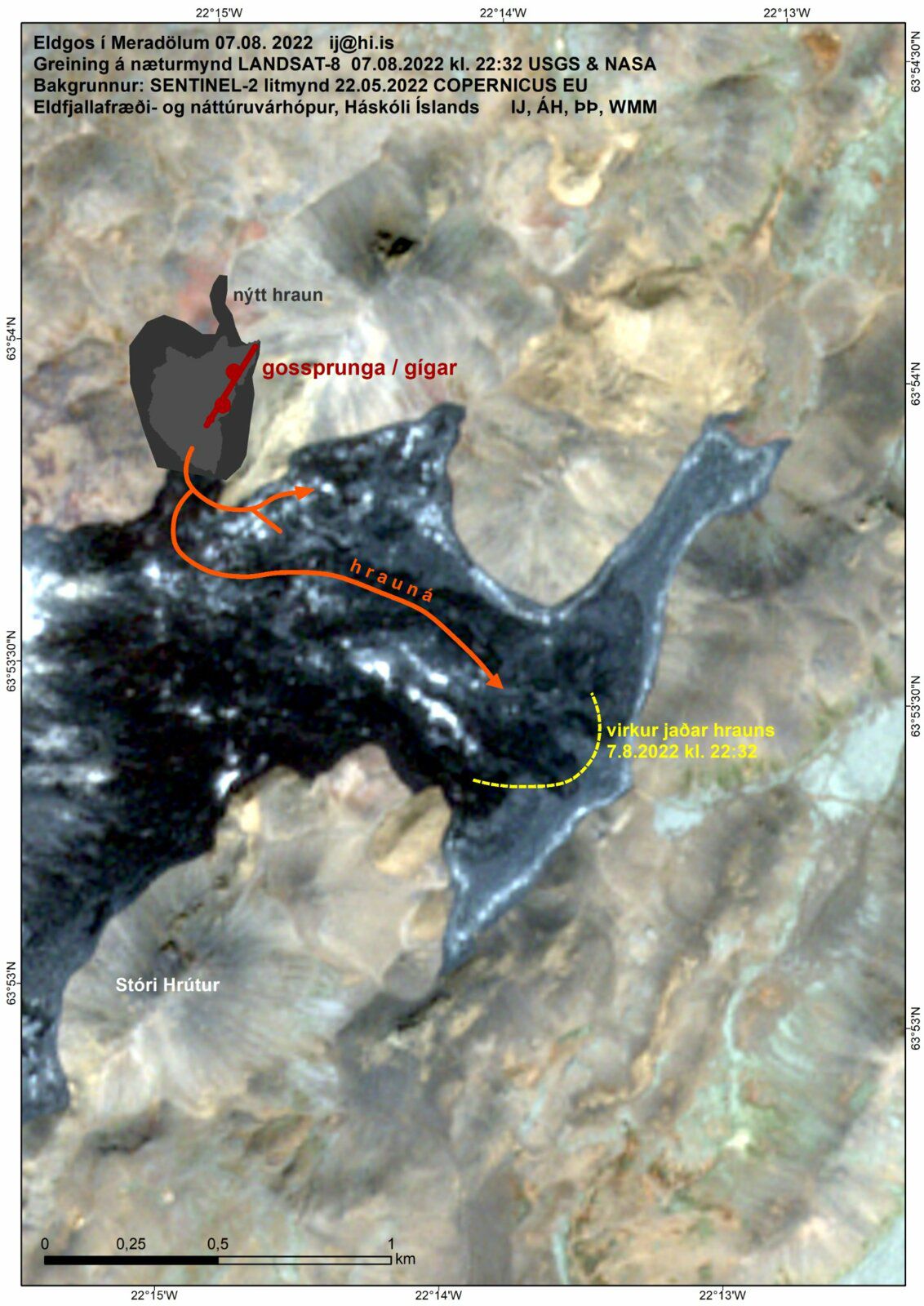 In Meradalur, the eruption site will remain closed today 9th of august, due to really bad weather and conditions at the site.

The USGS and NASA LANDSAT-8 nighttime image shows craters, lava flows, and the active lava front on August 7 at 10:32 p.m. local time. You can see the night image and its interpretation with another satellite image in the background. The active lava front is approaching the breach off Meradalir. New and new surfaces are forming, as the eruption continues.
On the map :
- Virkur jadar hrauns - Active lava facade
- Hrauná - Lava River
- Gossprunga/gígar - Fissure/eruptive craters Large cracks have formed in the Sundhnjúki waterfall north of Grindavík. Experts believe they were formed during the largest earthquake (of M 5.4) that hit before Meradälar erupted on Wednesday last week.
Guðlaugur Viðarsson, who lives in Grindavík, went for a bike ride to Sundhnjúk yesterday, but he visits the area regularly, so he immediately saw that the crack was new.

According to the scientists, it is likely that the cracks were formed during an earthquake that occurred three days before the start of the eruption. The life of the Tajogaite volcano after the eruption:

On the afternoon of August 8, during routine work in the crater of the Tajogaite volcano, in La Palma, InVolcan teams discovered that one of its interior walls had collapsed these days. These phenomena are normal due to soil compaction.

It remains hot: during measurements, the thermometer goes from 28°C on the surface to more than 70°C after having inserted it only 5-7 cm into the ash of the crater to the south of the volcanic edifice, after more than 8 months without any activity.

The IGME records a temperature of 800ºC in an incandescent zone of the Tajogaite volcanic cone.

The Canarian pines closest to the Tajogaite crater, which erupted on September 19, are greening again, although still timidly. 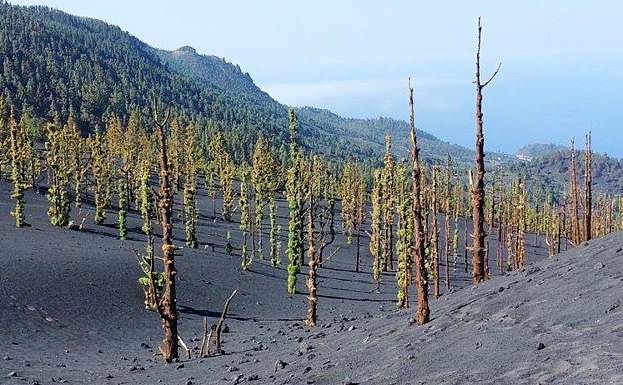