Strong fumarolic activity, incandescence of the lava dome, explosions, and hot avalanches accompany this process. Satellite data from KVERT showed an extended ash plume up to 64 km east of the volcano, and a thermal anomaly over the volcano. The eruption on Suwanosjima continues, with an explosion on August 28 at 2:36 p.m. local time at Mitake crater; it was accompanied by a plume of gas 1,100 meters above the crater, before dispersing to the southwest. The earthquake swarm linked to the Taʻū island continues.

Over the past 24 hours, around 30 earthquakes have been detected per hour by the new seismometers. The population felt 34 during the day, the strongest of M2.8 at 9:32 a.m. SST on August 27.

The volcanic alert remains at Advisory and the aviation code at Yellow. 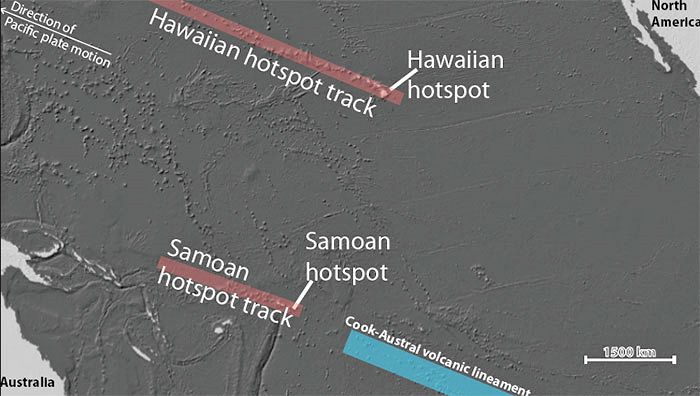 The Samoan and Hawaiian hotspots and their associated hotspot tracks. The Cook-Austral volcanic lineament is shown for reference. Figure made with assistance from Drew Reinhard. - Okeanos

At Ol Doinyo Lengai, the Radiative Power has been noticed by satellites more significantly since mid-July 2022.

Ol Doinyo Lengai – Radiative power logarithmic scale - Thermal anomalies can be masked or attenuated by clouds. - Doctor. Mirova as of 27.08.2022