News of Piton de La Fournaise, Poas, Fuego, and the seismic swarm in the Reykjanes Peninsula.

At Piton de La Fournaise, on Reunion Island, the OVPF does not report any eruptive activity during the month of July 2022.

The Observatory recorded at the level of the Piton de la Fournaise massif a total of:
- 29 superficial volcano-tectonic earthquakes (0 to 2.5 km above sea level) under the summit craters;
- 2 deep earthquakes (below sea level);
- 1,178 landslides (in the Cratère Dolomieu, the ramparts of the Enclos Fouqué and the Piton de Crac, and the Rivière de l'Est).

An aerial reconnaissance carried out by the Air Force Section and the PGHM on July 25 shows the presence of a large cone of scree at the foot of the Cassé de la Rivière de l'est.
These landslides are not related to the activity of the volcano, but to instabilities along the rampart caused by bad weather.

Much of the height of the broken, which reaches about 500 meters in height, was torn from the rampart. Hundreds of thousands of cubic meters of rock were swept into the bottom of the valley. Two kilometers further down is the EDF Les Orgues catchment which supplies the Sainte-Rose hydroelectric plant. (Clicanoo) 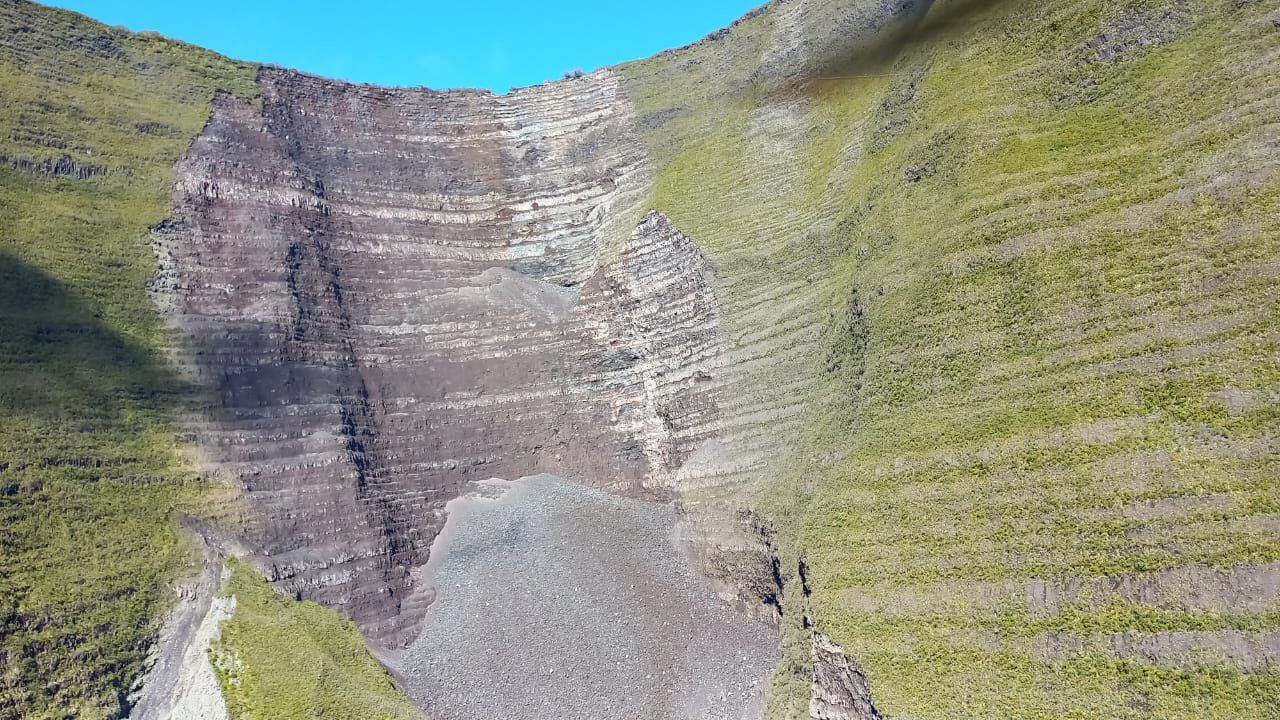 Seismicity remained low, with an average of 1 superficial volcano-tectonic earthquake per day. Most of these events were located under the Dolomieu crater.

Inflation, which resumed in June, witnessed weak recharge and weak pressurization of the superficial magmatic reservoir by upwellings of deep fluids. No eruption or volcanic tremor is recorded at Poas Volcano / Costa Rica.

Volcanic seismicity is dominated by low frequency and very low amplitude volcanic earthquakes of the BP type associated with the transport of fluids (water, steam, gas).

The fumaroles in the eastern sector of the crater and those inside the hyperacid lake remain at low degassing. Very low concentrations of magmatic gases are recorded at the summit. The ExpoGAS gas detection system located at the Visitor Viewpoint, south of the crater, records moderate ambient air SO2 concentrations of less than 1 ppm. Similar values ​​are recorded by the MultiGAS detector located on the western rim of the active Poás crater, less than 1.7 ppm SO2. The acidic lake, of a pale milky green color, maintains weak convective activity due to the presence of underwater fumaroles.

No significant crustal deformation is detected according to data trends from the OVSICORI-UNA GPS network.
Activity Level: Warning (2) The Fuego Volcano Observatory -OVFGO- reports weak gray fumaroles above crater level. 5 to 8 weak and moderate explosions per hour have been recorded, these generate a column of ash at a height of 4,600 to 4,800 msl (15,091 to 15,748 ft) which extends for approximately 10 to 15 km at west and southwest due to the wind pattern. During the night and early in the morning, incandescent pulses are observed at a height between 100 and 200 meters above the level of the crater. The explosions produce the descent of weak, moderate and strong avalanches around the crater towards the Ceniza, Santa Teresa, Taniluya and Trinidad ravines.

The lava flow in the Ceniza ravine reached a maximum length of 1,350 meters from the crater. Currently, the incandescence continues to be observed over a length of about 150 meters with a tendency to decrease in the hours or days to come, however, it is expected that it will continue to generate avalanches on its trajectory in due to the material accumulated in an unstable way in the upper part of said ravine, favoring the uplift of ashes in the environment.

Weak and moderate rumblings were generated which are at the origin of a weak shock wave which vibrates the houses near the volcano. Following the explosions, ash falls are recorded in the communities of Panimaché I, Panimaché II, Morelia, Santa Sofía, Finca Palo Verde, El Porvenir Sangre de Cristo, Yepocapa and others located west of the Fuego volcano . For time lapses, slight noises similar to a train locomotive lasting 1 minute are reported. In the Reykjanes Peninsula, the seismic swarm continues. A magnitude 5.0 earthquake occurred at 2:27 a.m. just west of Lake Kleifarvatn. It is in the same place that the earthquakes occurred this evening. The earthquake was widely felt in the southwest of the country. Seismicity increased on the Reykjanes Peninsula around 11 p.m. last night. The activity is now located just west of Lake Kleifarvatn.

The largest earthquake since the beginning of this episode on Saturday was of a magnitude 5.4 which occurred on Sunday at 5:48 p.m. It was located just 3 km NE of Grindavík. A total of 15 events of magnitude greater than 4 have been detected and they are located from Mount Þorbjörn to Lake Kleifarvatn.
There is an increased risk of rockfall on the Reykjanes peninsula. A few rockfalls were reported in the area. People are advised to be careful on steep slopes, near cliffs and to avoid areas where rocks may fall. Sentinel -1 asc image acquired last night. In the interferogram (July 20 - August 1) we see the deformation due to the new magmatic intrusion under Fagradalsfjall volcano and the earthquake of M5.x (SW). - via A. Nobile 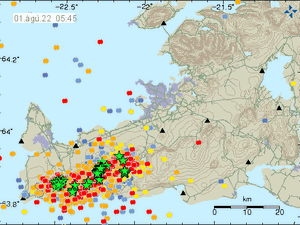